Of 263 patients in Tuscany, Italy, from whom ticks were removed during July 2005–May 2007, five showed signs of tick-borne encephalopathy. Of the ticks, 17 were Dermacentor marginatus; 6 (35.3%) of these were identified by sequence analysis as containing Rickettsia slovaca. Tick-borne lympadenopathy occurs in this area.

Rickettsia slovaca was first isolated in Czechoslovakia from the tick vector Dermacentor marginatus in 1968 (1) and was subsequently detected in several European countries. It was recognized as the causative agent of tick-borne lymphadenopathy (2–4) and Dermacentor spp.–borne necrosis-erythema-lymphadenopathy (5). Typical clinical signs of infection include skin lesions at the tick bite site and regional, often painful, lymphadenopathy (2,3). Acute disease can be followed by residual alopecia at the bite site (2). This disease is considered a mild rickettsiosis, but severe symptoms have been described, especially in untreated patients (2).

D. marginatus is the only member of the species Dermacentor reported in Italy; it is widely distributed in prairies and steppes up to 2,500 m above sea level, including the northern Apennines (6). Adults are active within a temperature range of 4°C to 16°C (7,8). Temperature influences the seasonality of tick-borne lymphadenopathy, which has a higher incidence during cold months (4,9). We describe results from a tick-borne zoonoses surveillance system that was implemented in 2002 at the Lucca local health unit (ASL 2) in Tuscany, Italy.

Patients admitted to emergency units in Tuscany, Italy, for tick removal were followed up for 40 days. Epidemiologic and clinical data were collected for each patient by using a standardized questionnaire. History of allergic reactions or hypersensitivity to tick bites was considered and evaluated to avoid mistakes in case definition. 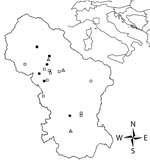 For pathogen detection by PCR, ticks were individually homogenized with a pestle in microcentrifuge tubes and DNA was extracted with the DNeasy Blood and Tissue Kit (QIAGEN, Hilden, Germany). Negative controls (distilled water) were used to check for contamination of samples during this phase. Success of DNA extraction was verified by using PCR for tick mitochondrial 16S rDNA (11). Two PCR assays, targeting citrate synthase A (gtlA) and outer membrane protein A (ompA) genes, were used to identify spotted fever group rickettsiae as described (12).

Cases of abnormal tickbite reaction were observed only in patients bitten by D. marginatus (Table 1). From July 2005 through May 2007, information on 263 patients was recorded in the surveillance system. Removed ticks were classified as Ixodes ricinus (n = 187), Rhipicephalus sanguineus (n = 6), or D. marginatus (n = 17); 53 were unclassified (lost or disrupted).

Five patients (29.4%) (2 adults and 3 children) showed clinical signs typically related to tick-borne lymphadenopathy. We defined tick-borne lymphadenopathy case-patients as those with skin lesion (eschar) at the tick bite site and regional lymphadenopathy (2). The 5 patients were examined by physicians at least twice. Each patient had enlarged lymph nodes (Figure 2 , panel A) at the second examination. Crusted scalp lesions (Figure 2, panel B) ranged in diameter from 8 mm to 25 mm. One patient was surgically treated to remove necrotic tissue from a large tache noire; he showed alopecia >8 months after acute episode (Figure 2, panel C). Three cases were recorded in spring, 1 in autumn, and 1 in winter (Table 2). Association between Dermacentor TEIs and occurrence of symptoms was not statistically significant (p = 0.13). Six (35.3%) of 17 ticks were positive by PCR for either gtlA or ompA. The ompA gene sequences of all positive samples showed similarity of 100% with the R. slovaca (GenBank accession no. U43808).

Until recently, Mediterranean spotted fever (MSF) caused by R. conorii and transmitted by the brown dog tick, R. sanguineus, was considered the only tick-borne rickettsiosis in Italy. Local investigations at ASL 2 showed a decrease in MSF incidence during the past 10 years and fewer Rhipicephalus spp. bites than Ixodes spp. and Dermacentor spp. bites. In the past 2 years, no MSF was officially recorded at ASL 2, and our results suggest an emerging role of R. slovaca as a tick-borne pathogen in the area.

Most bitten patients showed specific clinical manifestations (fever, itching, rash, weariness, and myalgia) and 5 (29.4%) had typical signs of tick-borne lymphadenopathy. Pathogen identification in ticks agreed with the case definition in 50% of cases. Infected ticks were removed from 3 patients not considered to have lymphadenopathy; 1 patient showed no symptoms, probably because the tick was not attached long enough to enable pathogen transmission (TEI = 1).

A study reported that children and women have a higher risk than men for infection caused by R. slovaca (4); all of our patients with tick-borne lymphadenopathy were children or women. This result reflects the higher risk for bite by Dermacentor spp.; 6 (35.3%) of the 17 patients were <10 years of age and 10 (58.8%) were female.

Cases reported in this study were concentrated in the northern part of ASL 2, despite the lower population density (Figure 1). Local investigations showed that wild boars, which seem to be important in the epidemiology of R. slovaca (13), are found in this area. In the northern part of this area, woodland habitat and human habits increase the risk for human contact with vectors. TEI did not show any association with cases but study of feeding duration is so far strictly applied to the transmission of Borrelia burgdorferi s.l. by I. ricinus (14).

In recent years, many efforts have been made to characterize distinct tick-borne diseases. A diagnostic approach that includes surveillance of patient symptoms and vectors can be helpful in identifying cases of tick-borne lymphadenopathy (15). Tick identification is also important in diagnosis (4).

Our data indicate a high prevalence of R. slovaca in D. marginatus collected from patients. On the basis of these results, all patients bitten by D. marginatus should be observed to determine whether specific treatments are required. The new surveillance system in Lucca will provide real-time data that will be useful for evaluation of patient health problems.

Dr Selmi is the head of the Permanent Observatory of Tick-borne Diseases at the Lucca local health unit in Tuscany, Italy. His primary research interests include emerging pathogens and epidemiology of tick-borne diseases.

We thank 3 anonymous reviewers for improving this article.

This study was supported by the Fondazione Cassa di Risparmio di Lucca.