The multidrug-resistant (MDR) Salmonella enterica serotype Newport strain that produces CMY-2 β-lactamase (Newport MDR-AmpC) was the source of sporadic cases and outbreaks in humans in France during 2000–2005. Because this strain was not detected in food animals, it was most likely introduced into France through imported food products.

From 2000 through 2005, the French National Reference Centre for Salmonella at the Institut Pasteur in Paris reported 829 Newport isolates among 69,759 Salmonella clinical isolates. During this period and depending on the year, serotype Newport ranked between 6th and 10th in prevalence among human serotyped isolates. From 2000 through 2005, the Agence Française de Sécurité Sanitaire des Aliments reported 2,160 Newport isolates among 101,791 Salmonella isolates collected from animals and food products.

Experiments were performed on the 46 third-generation cephalosporin–resistant Newport isolates (additional information available from fxweill@pasteur.fr). All but 1 of the Newport isolates were resistant to cefoxitin (Appendix Table). These isolates showed 4 resistance phenotypes; most (41, 89.1%) were resistant to streptomycin, sulfonamides, chloramphenicol, and tetracycline. PCR and sequencing showed that the 45 isolates resistant to cefoxitin were positive for the blaCMY-2 gene, and cefoxitin-susceptible isolates contained the extended-spectrum β-lactamase gene blaCTX-M-1. Ceftriaxone MICs of Newport MDR-AmpC isolates ranged from 32 mg/L to >256 mg/L, and ceftazidime MICs ranged from 64 mg/L to >256 mg/L. No blaTEM genes were detected. Three isolates with additional resistance to aminoglycosides contained a class 1 integron with the 1-kb gene cassette aadA24 (known to encode resistance to streptomycin and spectinomycin) (11). The chloramphenicol/florfenicol resistance gene floR was detected in all but 1 CMY-2–producing Newport isolate. 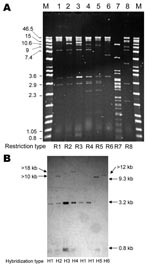 Clonal relatedness of Newport isolates was assessed by multilocus sequence typing (MLST) and PulseNet standard method pulsed-field gel electrophoresis (PFGE) (Figure 1). All 16 Newport MDR-AmpC isolates tested had a common sequence type (ST), ST45. XbaI-PFGE identified 10 distinct profiles (similarity 76.7%) among all 45 Newport MDR-AmpC isolates. Single enzyme matches were found for 3 of the profiles (15 isolates) in the US PulseNet national database (www.cdc.gov/pulsenet; Appendix Table; Figure 2). Two PFGE types (New6 and New8) were divided into 2–4 subtypes because of additional band(s) <100 kb. Isolates from the 2003 outbreak showed 4 similar but distinct PFGE profiles that differed by 1–2 bands, migrated between 60 and 100 kb, and were attributed to plasmid(s) (additional information available from fxweill@pasteur.fr). If only cases with indistinguishable PFGE profiles had been tested, potentially related cases would not have been linked to this outbreak. Therefore, during an outbreak investigation of Newport MDR-AmpC, analysis of plasmid content (either by alkaline lysis or S1 nuclease, depending on size of additional bands) might complete XbaI-PFGE profiles for isolates whose profiles differ by 1 or 2 additional bands of low molecular mass.

Alkaline lysis extraction showed that all but 1 of the Newport MDR-AmpC isolates harbored a plasmid >125 kb that hybridized with a blaCMY-2 probe; the remaining isolate harbored a plasmid of 100 kb (Appendix Table). Analysis with S1 nuclease showed that these plasmids were 100 kb–370 kb. Up to 3 additional plasmids (3.5 kb–100 kb) that did not have blaCMY-2 were detected in most isolates (Appendix Table). Cephalosporin resistance was transferred by electroporation of plasmid DNA to Eschericha coli DH10B for all 38 CMY-2–positive isolates tested. When present in the donor strain, resistance to sulfonamides, chloramphenicol, and tetracycline was also transferred. Restriction analysis of plasmids isolated from transformants showed 6 similar restriction profiles for Newport isolates (R1–R6) (Figure 2, Appendix Table). R1 was predominant (found in 26 isolates among 35 tested, 74.3%). Newport plasmids R1–R6 and Agona plasmid R8 were shown by PCR to contain variant A/C2 replicons (13), whereas Typhimurium plasmid R7 contained the I1 replicon.

Newport MDR-AmpC isolates have been the source of sporadic cases and small outbreaks in humans in France during 2000–2005. All isolates had the same MLST type, ST45, and highly similar XbaI-PFGE profiles. Their plasmids carrying blaCMY-2 were homogeneous (same incompatibility group A/C2, a main restriction type R1, and a main hybridization type H1). These results support clonal expansion of 1 Newport strain (or a limited number of genetically related Newport strains) able to acquire and maintain a large incA/C2 MDR plasmid.

The source of the French isolates remains unknown. However, this strain was not found in French food animals or domestically produced food products (additional information available from fxweill@pasteur.fr). One outbreak during the study period was linked to imported horse meat. Further investigation identified the source as a wholesaler who imported meat from Belgium, the United Kingdom, Hungary, Canada, Brazil, Argentina, Uruguay, and Australia (12). In contrast to Europe, Newport MDR-AmpC has been frequently seen in the United States during the past decade. Furthermore, several characteristics were shared between US and French Newport MDR-AmpC isolates: ST45 (15), PFGE profiles New5, New6a, and New6b (displayed by 15 isolates among the 45 studied), and blaCMY-2 plasmid hybridization type H1 (14). We can reasonably hypothesize that during 2000–2005 some isolates likely entered France from North America through imported food. Alternatively, they could have come to France and North America from some other country.

Dr Egorova is a microbiologist in the laboratory of intestinal infections at the Institut Pasteur in St. Petersburg, Russia. Her primary research interests are molecular epidemiology and antimicrobial resistance surveillance of S. enterica.

We thank all corresponding laboratories of the French National Reference Centre for Salmonella and the Agence Française de Sécurité Sanitaire des Aliments networks for participation in the study, and Peter Gerner-Smidt for comparing PFGE profiles with those of the PulseNet USA database.

S.E. and M.T. were supported by a grant from the Réseau International des Instituts Pasteur.