Antibodies against Lagos Bat Virus in Megachiroptera from West Africa

To investigate the presence of Lagos bat virus (LBV)–specific antibodies in megachiroptera from West Africa, we conducted fluorescent antibody virus neutralization tests. Neutralizing antibodies were detected in Eidolon helvum (37%), Epomophorus gambianus (3%), and Epomops buettikoferi (33%, 2/6) from Ghana. These findings confirm the presence of LBV in West Africa.

LBV and MOKV are each distributed in Africa and are members of phylogroup 2 within the genus Lyssavirus (1). Because LBV isolates (2) from African bats are increasing, our goal was to determine the prevalence of virus neutralizing antibodies against LBV in bat populations in West Africa.

Bats were sampled in January and May 2007 at 6 sites in Ghana: the center of Accra (urban habitat); the wooded outskirts of Accra (savannah habitat); and forested habitats at Pra, Kibi, Adoagyiri, and Oyibi (a plantation with woodland/forest border). Bats were captured by using 6–18-m mist nets; roosting Eidolon helvum were captured by using nets on poles. A sample size of 59 would provide 95% confidence of finding at least 1 LBV-seropositive bat in a large population (>5,000), given a seroprevalence of 5% and assuming random sampling (3). Species were identified by using a dichotomous key (4). Captured bats were manually restrained and anesthetized by intravenous injection; ≈0.2–1.0 mL of blood was collected from the propatagial vein before the bat was released. Blood was centrifuged in the field at ambient temperature at 3,000 rpm for 15 min. Serum was heat treated at 56°C for 30 min and frozen at –70°C.

Two species, Epomophorus gambianus and E. helvum, were caught in sufficient numbers (117 and 66, respectively) for reasonable inferences to be made about LBV seroprevalence rates (Table). A standard approach was used to calculate 95% confidence intervals (CIs) for seroprevalence (3). Because of the relatively short distances between study sites and the likelihood of bats mixing between these sites, bats of each species were considered to belong to single populations. All but 3 E. helvum were derived from a colony in Accra, whereas E. gambianus were derived from all habitat types.

Figure 1. Antibody titers to Lagos bat virus (LBV) in 6 species of fruit bat in Ghana. An LBV-specific modified fluorescent antibody neutralization test was used to determine the level of antibody in...

The modified FAVN test requires a cut-off threshold, which in prior bat lyssavirus studies has been a titer of 27, to avoid false-positive results (6,7). The first 121 samples collected were tested against the challenge virus standard; no tested bat was seropositive at 1:3 dilutions. A mean titer >9 was considered positive for LBV (Figure 1; [8]).

Because of the high level of seropositivity in E. helvum, we attempted to determine a possible case reproduction rate (R0) for LBV infection in this species by using the equation R0 = 1/x*, where x* = proportion of susceptible hosts in a population (9). We assumed that infection with each virus within the bat populations is endemic, stable, and randomly dispersed; that all seropositive animals have lifelong immunity that is detectable serologically; and that seropositivity is to 1 virus. On the basis of these assumptions, R0 = 1.6 (95% CI 1.3–2.0).

We found antibodies against LBV in healthy E. helvum bats in Ghana. Previous studies have suggested that healthy bats develop antibodies to other lyssavirus infections (7,10,11), which may reflect past exposure, rather than survival from clinical disease. LBV likely co-evolved with its natural megachiropteran host until a genetic stasis had been reached in which the virus–host relationship was in equilibrium. This situation would result in high seroprevalence rates after a wave of virus circulation in a colony. Nine seropositive bats (8 E. helvum, 1 E. buettikoferi) were apparently healthy pregnant females. These results support theories that lyssaviruses are endemic within specific bat populations, that they may not cause high mortality rates, that exposure rates of LBV between megachiroptera in Old World African bats are high, and that bats may breed successfully after LBV exposure (7,8). The number of high reciprocal titers against LBV (Figure 1) and the history of LBV isolation in E. helvum suggest that LBV circulates in megachiroptera in Ghana. However, further work is needed to determine the specific phylogroup 2 virus and its prevalence within specific bat populations.

No previous estimate of R0 for genotype 2 Lyssavirus has been calculated, and although anamnesis may lead to no detectable antibodies in bats with immunity and a consequent underestimate of R0, this value indicates the potential R0 and is comparable to values previously estimated for lyssavirus infections in bats (7,11). More detailed analysis relating to age-specific infection and survival rates or mode of transmission was precluded by the difficulty in determining the age of adult bats, the lack of juveniles in the sample, and the cross-sectional sample used. 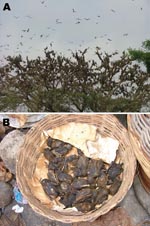 Figure 2. A) Density of a typical Eidolon helvum roost in the Accra colony. B) E. helvum as bushmeat in an Accra market.

The underlying cause of the difference in seroprevalence between E. gambianus and E. helvum with respect to LBV infection is unclear. Possible explanations include differential susceptibilities to infection; virus–host adaptation; different contact with the virus, including a recent epidemic in the E. helvum colony; or different population ecology. E. helvum resides in high-density populations (hundreds of thousands) (Figure 2, panel A) and migrates annually, compared with E. gambianus, which resides in less dense colonies of tens or hundreds (4). E. helvum commonly forms large colonies in African cities in close proximity to humans and domestic animals and is a food source in West Africa (Figure 2, panel B).

No investigations into infections of humans were made during these investigations, but lyssavirus infections in humans in Africa are underdiagnosed (12). Despite reduced pathogenicity of LBV in the laboratory, it has been isolated from dogs, cats, and a mongoose (2). Conversely, MOKV has caused a fatal case of encephalitis in a human (1). LBV and MOKV each have a substitution in the R333 glycoprotein residue (1). Although it is not the only protein to determine the pathogenicity of LBV, the R333 substitution still remains an important marker of rabies pathogenicity. In conclusion, the high seroprevalence to LBV in this population may pose a substantial public health risk because E. helvum is widely distributed in Africa and a food source in West Africa.

Mr Hayman is a Junior Veterinary Fellow at Cambridge Infectious Diseases Consortium and the Institute of Zoology. He has been working on bat viral pathogens with the Australian Animal Health Laboratory and at the Veterinary Laboratories Agency, Weybridge, UK.

We thank Charles Rupprecht, Louis Nel, and Paul Racey for helpful discussions and the Executive Director, Wildlife Division of the Ghana Forestry Commission, Ghana, and the Director of Veterinary Services, Ghana, for their commitment to and continued support for the project.

The study was supported by the Cambridge Infectious Diseases Consortium and the Institute of Zoology. A.R.F. was funded by the UK Department for Environment, Food and Rural Affairs (Defra) by grant SEV3500.

Antibodies against Lagos Bat Virus in Megachiroptera from West Africa