To assess diversity of rotavirus strains in Lilongwe, Malawi, we conducted a cross-sectional study of children with acute gastroenteritis, July 2005–June 2007. Serotype G12 was identified in 30 (5%) of 546 rotavirus-positive fecal specimens. The G12 strain possessed multiple electropherotypes and P-types, but their viral protein 7 sequences were closely related, indicating that reassortment has occurred.

Rotavirus is the leading cause of severe, acute gastroenteritis, a disease that causes dehydration and death in infants and young children worldwide (1); an estimated 527,000 childhood deaths occur annually (who.int/immunization_monitoring/burden/rotavirus_estimates/en/index.htm). Because of the high death rates in children, vaccination to prevent severe disease outcomes after rotavirus infection is an essential public health strategy (2,3). Currently, 2 live attenuated oral rotavirus vaccines are becoming part of childhood immunization schedules in North America, Latin America, and Europe; Phase III clinical trials are underway in Africa and Asia (3).

Rotaviruses are segmented, double-stranded (ds) RNA viruses that possess a triple-layered protein capsid. The 11 dsRNA segments, upon separation by electrophoresis, exhibit profiles that can be broadly categorized into long and short RNA patterns termed electropherotypes. The rotavirus outer capsid comprises 2 neutralization antigens, VP7 and VP4, which respectively define the G (for glycoprotein) and P (for protease-sensitive) serotypes. The 5 globally most common rotavirus strain types comprise long electropherotype P[8] strains possessing G1, G3, G4, or G9 specificity and short electropherotype G2P[4] strains (4). Rotaviruses exhibit considerable diversity, including unusual combinations of electropherotypes and serotypes (which suggests viral reassortment); globally, rare G and P types predominate in some regions (5). For example, we have previously described serotype G8 to be a locally prevalent serotype in Blantyre, Malawi (6). More recently, rotavirus serotype G12 has emerged in multiple countries (7). Our study assesses diversity of rotavirus strains in Lilongwe, Malawi, in anticipation of introduction of a rotavirus vaccine in this country.

This 2-year, cross-sectional study was undertaken at Kamuzu Central Hospital in Lilongwe from July 2005 through June 2007. Children <5 years of age with acute gastroenteritis who received oral and/or intravenous rehydration therapy, were enrolled after parents or guardians gave written, informed consent. Study participants included outpatients and inpatients. A fecal sample was collected from each case-patient and stored at –80°C until rotavirus detection and characterization were undertaken.

Group A rotavirus antigen was detected by a commercial ELISA performed according to the manufacturer’s instructions (Rotaclone; Meridian Diagnostics, Cincinnati, OH, USA). Among rotavirus antigen–positive specimens, specimens that exhibited color intensity at least equal to the positive control provided with the Rotaclone kit were selected for further strain characterization. Genotyping by multiplex, heminested reverse transcription-PCR (RT-PCR) was undertaken as previously described (6). Specimens that remained G nontypeable were analyzed by using a G12-typing primer (8), and those that could not be P-typed were further examined by a degenerate P[8] primer (9). Serotype G12 strains were further examined by polyacrylamide gel electrophoresis (PAGE) of rotavirus dsRNA followed by silver staining to determine the rotavirus electropherotype as previously described (10). 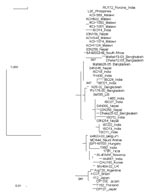 Rotavirus was identified as a leading cause of gastroenteritis among infants and young children seeking hospital care in Lilongwe, Malawi; the virus was detected in 38% of all case-patients. The G1P[8] strain, globally the most common rotavirus strain type, was also the most commonly identified rotavirus strain in Lilongwe, comprising 47% of all characterized strains. Serotype G8, first identified in Blantyre, Malawi, in the late 1990s in association with the P[6] and P[4] VP4 types and considered to have arisen by viral reassortment from a bovine origin (6,12), was detected in 29% of strains in association with P-types P[8], P[6], and P[4]. The G8P[8] strain, comprising 41% of all G8 strains in this collection, is gaining increasing global recognition as an emerging strain type (13). In this study, we have also identified the globally common serotype G2, in association with VP4 types P[4] and P[6]. Notably, rotaviruses bearing the P[6] VP4 type comprised 23% of all characterized strains, thus providing further evidence of its prominence in Africa (4) (Table).

We have identified in Malawi the globally emerging rotavirus serotype G12, which was detected in 5% of all specimens. The single previous description of serotype G12 from the African continent was from Johannesburg, South Africa (14). G12 rotaviruses, first identified in the Philippines in 1987, have emerged over the past few years in numerous countries worldwide (7).

In our study, G12 was associated predominantly with the P[6] VP4 type and less commonly with P[8] and P[4]. Multiple electropherotypes were demonstrated within P[6] strains, including long and short profiles. In contrast, the VP7 sequence of strains representing each electropherotype and P-type were closely related, sharing >99% nucleotide identity. These findings suggest the introduction of a single G12 VP7 gene into local rotavirus strains, which have subsequently undergone reassortment to generate G12 strains harboring a constellation of electropherotypes and P-types. Similar diversity among G12 strains has recently been described in Nepal (8,15). The critical role that viral reassortment has played in generating extensive genetic diversity among G12 rotaviruses in Lilongwe mirrors the evolutionary mechanisms that have led to the global emergence of this serotype (7). The close relationship of the VP7 genes of Lilongwe G12 strains with G12 strains from Nepal and India suggests an origin in Asia, a hypothesis proposed by Rahman et al. (7).

Two current rotavirus vaccines, Rotarix (GSK Biologicals, Rixensart, Belgium) and RotaTeq (Merck & Co., Whitehouse Station, NJ, USA) offer the potential to greatly reduce childhood deaths from rotavirus gastroenteritis (2,3). The monovalent vaccine Rotarix comprises a human G1P[8] rotavirus strain, whereas the pentavalent vaccine RotaTeq is a human-bovine reassortant vaccine comprising human serotypes G1, G2, G3, G4, and P[8] on a bovine strain background. Although both vaccines are highly effective in preventing severe rotavirus gastroenteritis in North America, Latin America, and Europe, their efficacy in countries harboring a wider diversity of strain types is yet to be fully established (2,3). Other rotavirus proteins (e.g., VP6 and NSP4) may play a role in the protective immunity against rotavirus infection; G12P[6] strains detected in the current study share neither G- nor P-type with either of the 2 current vaccines and could theoretically challenge vaccine efficacy. Continued surveillance for serotype G12 in Malawi and elsewhere in Africa is needed, given the propensity of this emerging serotype to rapidly spread and establish itself within populations (7,8).

This study was funded by the World Health Organization.