To the Editor: Chikungunya is a reemerging infectious disease that is endemic to Africa and Asia and caused by a mosquito-borne alphavirus in the family Togaviridae. Previous phylogenetic studies showed that chikungunya virus (CHIKV) strains were clustered into 3 distinct genotypes separated primarily by location into West African, Central/East/South African, and Asian genotypes (1,2).

Earlier outbreaks in Thailand, Cambodia, Vietnam, Myanmar, the Philippines, Malaysia, Indonesia, Pakistan, and India during 1960–1999 were caused by strains of the Asian genotype (2). However, explosive epidemics in Indian Ocean islands and India since 2005 and the worldwide increase in travel have changed the distribution of CHIKV genotypes. Recent studies have shown that different lineages of CHIKV strains of the Central/East/South African genotype have expanded locally and spread to new areas in Africa, Europe, and Asia and caused epidemics (2–7).

In comparison with other CHIKV strains, unique substitution K252Q in the envelope 2 (E2) protein was found in all 4 imported isolates from Malaysia, and 2 unique substitutions, V4A and N349D, in the envelope 1 (E1) protein were found in the imported Bangladesh/0810aTw isolate. The Indonesia/0706aTw isolate was most closely related to the Malaysia MY003IMR isolate (99.42% identity). A novel 4-aa deletion, corresponding to nonstructural protein 3 codons 379–382 (TTACCAACCATA coding for Leu-Pro-Thr-Ile in the Malaysia MY003IMR strain), was observed in the Indonesia/0706aTw strain when it was compared with other CHIKV sequences available in GenBank. Further sequence analysis showed that all 6 isolates from Indonesia had the same deletion in this region. 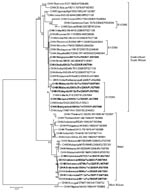 Our results provide insights into the current distribution of different CHIKV genotypes and lineages. Phylogenetic analysis demonstrated that CHIKV strains isolated from Indonesia during 2007–2008 remain stable and belong to the Asian genotype, whereas the other 7 isolates from Singapore, Bangladesh, Malaysia, and India belong to the Central/East/South African genotype. The Malaysia/2008–2009 and Bangladesh/2008 isolates have the E1–226(V) mutation similar to reported variants isolated in Cameroon, some Indian Ocean islands, India, Italy, and Gabon during 2006–2007 (4,6–9). These results show that different lineages of CHIKV strains from India with the Central/East/South African genotypes have been transmitted long distances by infected persons to various countries in Asia, including Singapore, Malaysia, and Bangladesh.

Although the urban mosquito Aedes aegypti is the primary vector for dengue and chikungunya transmission in Asia, the Ae. albopictus mosquito, a less efficient vector, was recently identified as the main or alternate vector in chikungunya outbreaks in central and East Africa (4,7,10), India (8), and Italy (6). Recent studies have suggested that the increased chikungunya outbreaks caused by CHIKV strains of the Central/East/South African genotype might be associated with a change in 1 nt, the A226V mutation, in the E1 protein during continuous epidemics (8,9). It is not known whether E1-A226V variants play a dominate role in urban or periurban areas of Asia and Africa where Ae. aegypti and Ae. albopictus mosquitoes are present.