In February 2008, a Mayaro fever virus (MAYV) outbreak occurred in a settlement in Santa Barbara municipality, northern Brazil. Patients had rash, fever, and severe arthralgia lasting up to 7 days. Immunoglobulin M against MAYV was detected by ELISA in 36 persons; 3 MAYV isolates sequenced were characterized as genotype D.

Mayaro virus (MAYV) is a member of the family Togaviridae and the genus Alphavirus. Recent molecular studies have recognized 2 MAYV lineages: genotypes D and L (1). MAYV has been associated with a dengue-like illness with rash, fever, and severe arthralgia in tropical South America. Arthralgia lasts for several weeks and affects principally ankles, wrists, and toes, but also can affect major joints. MAYV causes a mild to moderately severe acute febrile illness of 3–5 days’ duration with uneventful recovery (2). 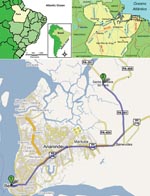 In February 2008, an outbreak of a dengue-like illness was reported in the Pau D’arco settlement, 38 km from Belém, Para state, in the Brazilian Amazon (Appendix Figure). This rural community has 48 houses with ≈150 inhabitants, many of whom live in poor conditions. They reside in the middle of a native forest, in softwood houses, in the municipality of Santa Barbara (2007 population ≈14,439).

A total of 105 persons were examined in a house-to-house survey. They reported a febrile illness within the past 30 days, had a current febrile illness, or reported contact with persons with febrile illness. Fifty-three resided in the settlement (50 were agricultural workers), and 52 were agronomy students at a public university in Belém and had been training for a week at a field station adjacent to the settlement. The students slept in the station for a week; their activities included periodic visits to the settlement and sporadic ingression to the forest. Students and agricultural workers were bled weekly by convenience from March 17 through April 4, 2008. All serum samples were processed by ELISA for detection of immunoglobulin (Ig) M (3).

During the same diurnal period (9:00 –3:00 ), mosquitoes were captured in the settlement by using human bait on the ground and in the forest canopy (≈15 m high) near the residences. A total of 832 (49 lots) Culicidae mosquitoes were collected and frozen before being used for virus isolation. Of these, 188 (11 lots) were Haemagogus janthinomys, the main vector of MAYV; the remaining 644 (38 lots) were mainly members of the genera Wyeomyia, Aedes, Sabethes, and Limatus.

Newborn mice (Mus musculus) and C6/36 cells were inoculated with acute-phase serum from samples collected from febrile patients and pooled mosquitoes, as previously described (4,5). The inoculated animals and cells were observed daily, and the presence of virus was confirmed by complement fixation and immunofluorescent assays (4). Three MAYV strains were isolated: 2 from febrile persons and 1 from a pool with 2 H. janthinomys mosquitoes collected at ground level. All 3 strains were isolated with both assays.

Figure 2. Comparison of genetic relationships among the Marayo virus strains sequenced in this study with those isolated in different areas of South America, periods of time, and hosts. Numbers above and within...

IgM was detected in 36 (34%) serum samples (Figure 1, panel A). Of those 36 samples, 23 (64%) were collected from residents of the settlement, and 13 (36%) were from residents of Belém and Ananindeua municipalities; these persons had visited the settlement area for a week (Figure 2, panel B). Persons with Mayaro fever ranged in age from 4 to 55 years, and 21 (58%) were male (Figure 1, panel C). Fifty-two percent of MAYV-positive persons were students, 31% were agriculturists, and 17% participated in other activities (Figure 1, panel D).

RNA was extracted by using the TRIZOL LS (Invitogen, Carlsbad, CA, USA) reagent method according to the manufacturer’s instructions. Envelope (E)2 and E1 genes of the MAYV genome were amplified by using a standard 1-step reverse transcription–PCR protocol, as previously described (1). The cDNA products were directly sequenced (6).

We conducted phylogenetic analysis by using the maximum parsimony (heuristic algorithm), neighbor-joining (Kimura 3-parameter and F84 corrections), and maximum-likelihood methods (7) implemented in the PAUP software (8) for the nucleotide sequences obtained for the isolates and representative members of other Mayaro-related viruses belonging to the genus Alphavirus available at GenBank (www.ncbi.nlm.nih.gov). Bootstrap resample method (1,000 replicates) and outgoup definition were used to provide confidence for the phylogenetic groups (9).

The 3 MAYV isolates were successfully sequenced, and the nucleotide sequences covering the 3′ E1 region, the entire E2 gene, and 3′ noncoding region (≈2,000 nt) were phylogenetically compared with other MAYV and Mayaro-related viruses isolated during different periods (1954–2008) and from different hosts (human and arthropods) in Brazil, Peru, French Guiana, Trinidad and Tobago, Suriname, and Bolivia (Figure 2).

MAYV has been isolated only in northern South America. Probably because of the short viremic period, it is sporadically isolated only during enzootic periods. However, during epidemics or epizootics, the number of isolates increase sharply (10,11). The few isolates obtained are intriguing and contrast with the high prevalence of specific antibodies in Pan-Amazonia; previous studies have shown widespread immunity in the Amazon, ranging from 5% to 60%. Positivity increases with age and is higher in rural and neighboring communities, as observed for the Amerindians (2,12,13).

In a previous outbreak in Belterra, several patients were too ill to continue their daily activities while febrile, and some even became prostrate. Moreover, these patients frequently reported severe arthralgia that led to temporary incapacitation (13,14).

Our data confirmed the occurrence of a Mayaro fever outbreak in the Pau D’Arco settlement. Clinically, the disease was similar to other outbreaks and characterized mainly by fever, arthralgia, myalgia, headache, rash, and dizziness (2,13–15). This outbreak was reported 17 years after the last episode of the disease described in the municipality of Benevides, which is closer (≈10 km) to Santa Barbara (P.F.C. Vasconcelos, unpub. data). The clinical and laboratory data from this MAYV outbreak caused by genotype D confirmed in Santa Barbara provide a better understanding of the MAYV molecular epidemiology in the Brazilian Amazon region.

Dr Azevedo is a physician working with arboviruses and rodent-borne viruses at Instituto Evandro Chagas. Her research interests include epidemiology of these and other emerging infectious diseases.