To explore geographic and host-taxonomic patterns of hantaviruses in Paraguay, we established sampling sites in the Mbaracayú Biosphere Reserve. We detected Jaborá virus and Itapúa37/Juquitiba–related virus in locations ≈20 m apart in different years, which suggested sympatry of 2 distinct hantaviruses.

We established and sampled 10 mark-recapture sites within and adjacent to RNBM during 2003–2007. Sampling of grids depended upon weather conditions, the purpose of the grid, and transitory human settlements. Each mark-recapture grid consisted of an 11 × 11 array of trap stations spaced 10 m apart, each of which had 1 standard live trap (H.B. Sherman Traps, Tallahassee, FL, USA) placed on the ground, and another in branches or vines 2–3 m above ground to capture arboreal species. Grids were sampled for 8 nights, with at least 2 months between sampling sessions. Rodents captured in the mark-recapture grids were individually marked with passive integrated transponder tags, and ≈100 μL of blood was collected from the retroorbital sinus (once per trapping session). Animals were identified to species, age class, reproductive condition, sex, and weight and released.

Rodents were also collected in a series of traplines, each of which contained 50 traps placed ≈10 m apart. Animals collected in traplines were killed, standard collecting information was recorded, and liver, lung, heart, kidney, muscle tissues, and blood specimens were collected. All samples were snap-frozen in liquid nitrogen, transported to the Museum of Texas Tech University (TTU), and stored at –80°C. Standard voucher specimens were prepared from these animals, and have or will be deposited in the Museum of TTU or the Museo Nacional de Historia Natural del Paraguay. All field protocols followed American Society of Mammologists guidelines for the use of wild mammals in research (6), and were reviewed and approved by the TTU Animal Care and Use Committee.

Total RNA was extracted from antibody-positive blood clots from mark-recapture samples or lung tissue from killed animals. Nested reverse transcription–PCR was performed to amplify a 371-nt small (S) hantavirus RNA segment (4). Hantavirus RNA was detected in 23 A. montensis, 5 O. fornesi, 1 O. nigripes, and 1 Oligoryzomys sp. Of these animals, all but 2 A. montensis were males, which indicated that male rodents play the primary role in maintenance and transmission of hantavirus. 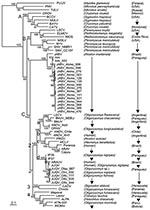 Figure 2. Phylogenetic tree based on Bayesian analysis of the small (S) segment of American hantaviruses, Paraguay, 2003–2007. The tree is based on 1,014 nucleotides of partial S segment of North and South...

Bayesian analysis based on the 1,014-nt sequence showed that all sequences from A. montensis formed a strongly supported clade, which included AAIV-related hantaviruses from Itapúa Department, Jaborá virus (JABV) from southern Brazil, and strains from RNBM in Paraguay (Figure 2, clade C1). Phylogenetic analyses identified 3 subclades representing virus sequences from animals in the RNBM, Itapúa, and southern Brazil. This type of geographic clustering is similar to Sin Nombre–related viruses in deer mice in North America (7). All S segment sequences from A. montensis were closely related, with nucleotide sequence differences between RNBM strains and AAIV and JABV of 4% and 12%, respectively, and derived amino acid differences of 0% or 1%, respectively (Table 1).

In contrast, all virus sequences from O. fornesi, O. nigripes, and Oryzomys sp. at RNBM formed a strongly supported clade with viruses related to Juquitiba virus (JUQV) from Brazil and Itapúa virus strain 37, which was originally detected in O. nigripes from Itapúa Department in eastern Paraguay (Figure 2, clade C2d). Nucleotide sequence differences between JUQV strains from RNBM were 0%–2%. Nucleotide sequence differences between JUQV strains from RNBM and Itapúa virus strain 37 or JUQV (Brazil) were 5% or 4%, respectively, and derived amino acid differences were 0% (Table 1). This clade is phylogenetically distinct from viruses that form the Akodon montensis clade at RNBM and more closely related to Andes (clade C2b) and Bermejo-Ñeembucú (clade C2a) viruses. This finding suggests that spillover infection of JUQV-related viruses is actively occurring among oryzomyine rodent species at RNBM, as reported for other hantaviruses in oryzomyines (8) and other rodent hosts of Old World hantaviruses (9,10). Additional data are needed to determine the primary oryzomyine reservoir of JUQV and to better understand mechanisms by which spillover occurs.

In addition to spillover infection of JUQV among oryzomyine rodents, we identified 2 virus strains (JUQV and JABV) in close proximity (collected ≈20 m apart on the same grid in the same sampling session) on 2 occasions, in sites separated by ≈30 km (Figure 1; Table 2). Thus, these 2 distinct hantaviruses appear to be maintaining a sympatric status across a considerable expanse of landscape, rather than reflecting a temporary or localized phenomenon. We use the term sympatric to underscore that these viruses are in the same community and are near enough (their rodent reservoirs) to interact.

Dr Chu is a research scientist at Southern Research Institute. His research interests include the ecology and evolution of hantaviruses.

We thank Robert J. Baker and Heath Garner for approving and facilitating loans of rodent tissues; the Secretaría del Ambiente (Paraguay) for providing permits to collect and export rodents and tissues; and the field crew, led by Ismael Mora, for dedication to their work, regardless of circumstances.

This work was supported by a grant from the Fogarty International Center (1 R01 TW006986-01) to C.B.J. under the National Institutes of Health–National Science Foundation Ecology of Infectious Diseases initiative.