To the Editor: To date, the genus Kobuvirus has consisted of 2 officially recognized species, Aichi virus and Bovine Kobuvirus (1). Aichi virus has been shown to be associated with acute gastroenteritis in humans (2–4), and bovine kobuvirus has been detected only in cattle (5,6). Most recently, a third candidate species of Kobuvirus has been described in pigs by 2 different groups of investigators from Hungary and the People’s Republic of China (7,8). This new candidate species was serendipitously recognized in stool specimens from pigs when PCR products (≈1,100 bp) were amplified by using a primer pair for the detection of caliciviruses (7).

Nucleotide sequences of these nonspecific PCR products were similar to those of the U-1 bovine kobuvirus and Aichi virus A846/88 reference strains; sequence identities ranged from 73% to 79% at the nucleotide level and from 69% to 70% at the amino acid (7). The representative strain of a new candidate species of porcine kobuvirus, S-1-HUN (Porcine kobuvirus/swine/S-1-HUN/2007/Hungary), has been analyzed to determine its complete genome sequence and genetic organization (9). The RNA genome of the S-1-HUN strain comprises 8,210 nt, with a genome organization analogous to that of picornaviruses. Therefore, this strain is tentatively classified as a new species of the genus Kobuvirus, and named porcine kobuvirus (7,9).

A total of 98 stool specimens were collected from piglets with diarrhea from 6 farms in Chiang Mai Province, Thailand, during 2001–2003. Age of the piglets ranged from 7 to 49 days old. Porcine kobuvirus was detected in fecal specimens by RT-PCR (9). The representative strains of porcine kobuvirus detected in our study were analyzed further by direct sequencing of their PCR amplicons (216 bp) by using BigDye Terminator Cycle Sequencing Kit (Applied Biosystems, Foster City, CA, USA). Sequences of these fragments were compared with those of reference strains available in the NCBI GenBank database by using BLAST server (http://blast.ncbi.nlm.nih.gov/Blast.cgi). Phylogenetic and molecular evolutionary analyses were conducted by using MEGA 4 (10). Nucleotide sequences of porcine kobuvirus strains described in this study were deposited in GenBank under accession nos. GQ152093–GQ152122. 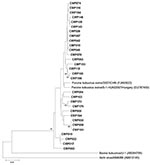 Figure. Phylogenetic analysis of the partial nucleotide sequence encoding the 3D region of porcine kobuviruses (in boldface) isolated in Thailand, 2001–2003, and other reference strains. The tree was generated on the basis...

Porcine kobuviruses have previously been reported only in healthy pigs (7–9). In our study, the exceptionally high prevalence of porcine kobuviruses (99%) has been observed in piglets with acute gastroenteritis; those samples were negative for rotavirus infection as determined previously by RT-PCR. However, associations of this agent with enteric diseases in pigs remains unclear because no data were available that tested for porcine kobuvirus in pigs without gastroenteritis from the farms in the same area. In addition, infection with other pathogens that may cause diarrhea in pigs, such as bacteria or other porcine caliciviruses, needs to be ruled out. Further extensive epidemiologic surveillance and comprehensive characterization of porcine kobuvirus strains from other areas may help clarify the distribution, heterogeneity, and association of porcine kobuviruses with enteric diseases in pigs.

This study was supported by Grant-in-Aid for Scientific Research under the Japan Society for the Promotion of Science postdoctoral fellowships and by grants-in-aid from the Ministry of Education and Sciences and the Ministry of Health, Labor and Welfare, Japan. The study was also supported in part by the Research Fund from the Faculty of Medicine, Chiang Mai University, Thailand.