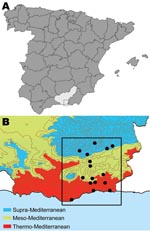 Figure 1. A) Location of the Alpujarras in southeastern Spain (37º00’–37º20’N and 3º00’–3º30’W). B) Bioclimatic levels (shading) and villages (black dots) where serum samples were collected from dogs to examine for leishmaniasis prevalence...

It has been suggested that climate change has the potential to change the transmission intensity of vector-borne diseases such as leishmaniasis, but supporting literature is lacking (1,2). Because long-term quality data on leishmaniasis caused by Leishmania infantum and its vector (3–9) are available for the Alpujarras region of southeastern Spain (Figure 1), this is an ideal area for studying changes in the prevalence of canine leishmaniasis in a changing environment. Our study objectives were to determine whether any changes had occurred in the prevalence of canine leishmaniasis over 22 years and to identify risk factors for this disease.

To achieve the first objective, we conducted a cross-sectional study in the Alpujarras from April through June 2006. We then compared current leishmaniasis seroprevalence data with data from 2 cross-sectional surveys conducted in 1984 and 1991 (3–5). The villages sampled for all 3 studies were similar and had been selected at random from within each of the 3 bioclimatic levels (thermo-, meso-, and supra-Mediterranean) that comprise the inhabited zone of the Alpujarras (Figure 1) (10). For each level, respectively, altitudes are 0–700, 600–900, and 900–1,800 m above sea level; annual mean temperatures are 17–19, 13–17, and 8–15°C; and annual rainfalls are 200–350, 600–1,000, and 1,000–1,600 inches. The dates for sample collection were set to coincide with organized events at which dogs were gathered (e.g., antirabies vaccination campaigns). All 3 surveys used indirect immunofluorescence for diagnosis; protocols and positivity threshold were identical. Dogs with a titer >160 were considered positive. To determine and compare the existence or lack of statistically significant differences between present and past prevalence rates, we used the χ2 or Fisher exact test.

To achieve the second objective, we conducted a survey. The owners of the dogs included in the cross-sectional study conducted in the Alpujarras from April to June 2006 were asked to complete an epidemiologic record for each dog tested; data on the animal and its environment were recorded for subsequent use in univariate and multivariate logistic regression analyses (Tables 1, 2). Density data were included for 2 vectors, Phlebotomus perniciosus and P. ariasi sandflies, captured with sticky traps in June 2006 in the same villages in which the surveys were conducted. No retrospective entomologic analysis was performed as had been done for canine leishmaniasis.

Dogs at greatest risk for canine leishmaniasis in the disease-endemic region of the Alpujarras were large dogs (>25 kg) and older dogs (>4 years) that worked as guard dogs or sheepdogs, slept outdoors, and lived at the thermo- or meso-Mediterranean level in a village such as Torvizcón, where the P. perniciosus density is >4 sandflies/m2. Risk for these dogs was 54,571× greater than for dogs that were kept as pets, were small, were <4 years of age, and slept inside a house in a village such as Mecina Bombarón or Pórtugos at the supra-Mediterranean level where P. perniciosus density is <4 sandflies/m2.

Among the drivers of global change that have the potential to influence vector-borne diseases, climatic and nonclimatic (socioeconomic, demographic, and environmental) factors have been cited (1,2). Although it is not easy to attribute our findings—progressive increase in seroprevalence at the meso-Mediterranean level and drop and subsequent rise at the thermo-Mediterranean level (Figure 2)—to 1 or more drivers, we can attempt to find some form of association in the changes that have occurred in the Alpujarras throughout these 2 decades. Studies on climate change in Spain confirm a warming tendency (reflected at the global level), which provides evidence that temperatures have been increasing for a quarter of a century (11,12). Thus, we must assume that changes in temperature, rainfall, or humidity will have equally affected the 3 bioclimatic levels researched in the Alpujarras and may have influenced the spatial and temporal distribution and the seasonal dynamics of sandflies. An increase was detected in the period of P. perniciosus activity in the region; these effects were probably more notable at the meso-Mediterranean level because this is where the density of this vector species is at its highest (6; Martín-Sánchez et al., unpub. data). During the time period researched, the human population remained constant in the Alpujarras; it has, however, progressively decreased in the disperse populations and increased in population centers. Unfortunately, no official figures for the canine population are available, although we were informed by staff of local town halls that in 1991, the 615 dogs analyzed accounted for ≈100% of the total number of dogs registered in the villages sampled (3). The Alpujarras economy is based mainly on agriculture and livestock. One change during the period studied was the gradual disappearance of livestock enclosures in rural population centers. These enclosures appear to create a substantial risk for infection with Leishmania spp. (13,14) and are ideal places for sandfly blood sucking, mating, and oviposition (15).

With respect to risk factors, the increase in canine leishmaniasis seroprevalence as animal’s age increases seems logical because in a leishmaniasis-endemic area, the greater the age, the longer the animal will have been exposed to sandflies and the greater the probability of having been bitten by an infected female sandfly. Seroprevalence of canine leishmaniasis also increases gradually with weight, which could be attributed to the vector being more attracted to larger animals. Dogs that sleep outdoors are at greater risk than those sleeping indoors because the density of the vector (P. perniciosus) is greater outdoors than inside a house. The association between P. perniciosus density and canine leishmaniasis seems logical, considering that P. perniciosus is the main vector species in the Alpujarras. This is the only species found to have been infected in this region (8,9), although P. ariasi is a proven vector in the nearby region of the Axarquia (13).

In the Alpujarras, the percentage of dogs kept as pets has increased from 42% in 1991 (3) to 59% in 2006 (p<0.001). This increase corresponds to a general increase in standard of living and, along with other factors such as the disappearance of livestock enclosures from within population centers, would have acted to reduce transmission. Only the extension of the vector’s activity period, which was detected at some trap sites, would have acted to increase transmission. Such extension of activity may be related to the increase in temperature brought about by climate change (11,12).

Dr Martín-Sánchez is a professor in the Parasitology Department of the University of Granada. Her main area of research is the epidemiology of leishmaniasis.