Multiple locus variable number tandem repeat analysis was performed on 178 Bartonella henselae isolates from 9 countries; 99 profiles were distributed into 2 groups. Human isolates/strains were placed into the second group. Genotype I and II isolates shared no common profile. All genotype I isolates clustered within group B. The evolutive implications are discussed.

Bartonella henselae is the zoonotic agent of cat-scratch disease and has been associated with bacillary angiomatosis, bacillary peliosis, endocarditis, osteomyelitis, and neuroretinitis (1). It is usually present in low numbers in infected human tissues, whereas cats, the natural reservoir for the bacterium, are prone to persistent bacteremia. Therefore, most B. henselae isolates are of feline origin. Two genotypes, based on 16S rDNA differences, have been described (1). Genotype I was more frequently observed in humans in some countries where most cats are infected with genotype II (2,3). Genotype II is more prevalent in cats in Europe, Australia, and the United States (2–6), and most feline isolates from Asia belong to genotype I (7–9). In a recent study, 3 (1.6%) of 191 B. henselae isolates harbored 2 different 16S rDNA copies and could not be assigned to a distinct genotype (10). However, most isolates harbored 2 identical 16S rDNA copies and were assigned to either type I or II, confirming that delineation of B. henselae isolates in two 16S rDNA types is generally reasonable.

Multiple-locus variable number tandem repeat analysis (MLVA) was recently developed for B. henselae typing (6). The results are produced in an intrinsically quantitative form, called a profile, corresponding to the number of basic units in an isolate for each variable number tandem repeat (VNTR). MLVA was more discriminatory (11) than the other widely used typing techniques, such as pulsed-field gel electrophoresis (2), multilocus sequence typing (MLST) (12) and multispacer typing (MST) (13). In our protocol, MLVA involves the amplification of 5 main VNTR loci, BHV-A to -E, for B. henselae VNTRs (6).

Ninety-nine different MLVA profiles were observed (Table 1), corresponding to an average number of isolates per profile of 1.8 (Table 2). Sixty-nine of these profiles were found in only 1 isolate or strain (67%), and 30 were observed in >1 isolate. Among these, none was shared by genotype I and genotype II isolates. Diversity index (DI) was 0.98 (Table 1). Diversity was observed in both genotypes because genotype-specific DIs were almost identical (Table 1).

MLVA profiles appeared location-specific because only 4 (13%) of the 30 profiles observed in >1 isolate/strain were present in >1 continent (Table 2). Within continents, no marked dominance of a given profile was observed, and continent-specific DIs were similar (Table 1).

For BHV-A, only 2 alleles (14 and 15 copies) were found in isolates from humans, whereas all 8 identified alleles were observed in cat isolates. The number of repeats differed significantly between sick humans and healthy cats (p = 0.02, by Fisher test). 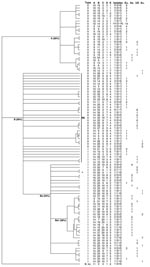 Appendix Figure. Dendrogram of the 99 multilocus variable number tandem repeat analysis (MLVA) profiles obtained with 178 isolates and strains. Bootstrap distances are indicated between brackets after the names of the groups and...

Relationships between the 99 MLVA profiles were analyzed by unweighted pair group method with arithmatic mean (UPGMA), using a categorical distance, with a B. koehlerae isolate used as an outgroup. To take into account that UPGMA is sensitive to taxa entry order, we computed the majority-rule consensus tree of 500 dendrograms built with random taxa entry order. MLVA profiles were grouped into 2 main groups named A and B (Appendix Figure). Group A (26 profiles), was exclusively constituted by genotype II feline isolates. Group B (73 profiles), to which all human isolates belonged, further divided in 2 subgroups, Ba and Bb. Subgroup Ba (38 profiles) was exclusively composed of genotype I isolates, including the reference strain Houston I and a homogenous subgroup, Ba1, containing 84% of the Asian isolates. Finally, 83% of subgroup Bb isolates belonged to genotype II (29/35 profiles).

The utility of MLVA for molecular epidemiologic analysis of clusters was tested using isolates from California cats and their owners (14). Five human–cat groups of B. henselae isolates were analyzed. For 1 cat-human pair of isolates, which belonged, respectively, to genotype II and genotype I, major profile differences were observed, as expected. The 4 other cat-human groups, which possessed the same genotype, also had the same MLVA profile with the 5 tested BHV, as well as with the 6 additional BHV (F–K) and variant alleles for BHV-A and/or B (6). Sequencing confirmed these results.

Our results confirm that VNTRs are excellent molecular markers for confirming or excluding the responsibility of a given cat in the transmission of B. henselae to a human. In California, the profile identity observed within 4 clusters further supports the hypothesis that all these humans acquired infection from their respective domestic cat contacts.

MLVA enabled a clear separation between genotypes I and II, because no profile was shared between both genotypes. The dendrogram showed a high level of discrimination between 16S rDNA genotypes in the B. henselae population tested. Interestingly, the groups and subgroups delineated by MLVA were the same as those defined by MLST, a standard method for phylogenetic analysis (12). The same was observed with MST (13). The isolates of the subgroup Bb appeared divergent and distant from each other and from subgroup Ba that contains almost all genotype I profiles (98%). Moreover and despite possible clustering for some of the isolates, none of the 21 human isolates was present in group A. Interestingly, as for most of the human patients, the isolate obtained from the ill dog also belonged to genotype I.

This work was supported by a grant from the Merial Company (grant no. 02TIC), National Institutes of Health grant R01 AI52813, a CA HIV/AIDS Research Program Award, and a Burroughs Wellcome Fund Clinical Scientist Award in Translational Research.