We describe a cluster of cowpox virus (CPXV) infections in humans that occurred near Munich, Germany, around the beginning of 2009. Previously, only sporadic reports of CPXV infections in humans after direct contact with various animals had been published. This outbreak involved pet rats from the same litter.

Cowpox virus (CPXV) belongs to the family Poxviridae, genus Orthopoxvirus (OPV), and is closely related to other species, such as variola virus, vaccinia virus (VV), and monkeypox virus. Originally, cows were wrongly presumed to be CPXV reservoirs. Wild rodents are now considered to be the true reservoirs; cows, cats, zoo animals, and humans are only incidental hosts (1). Human CPXV infections are rare and usually cause localized skin lesions. However, in immunocompromised patients, severe generalized skin infections may occur (2). CPXV is transmitted to humans by direct contact with infected animals, mostly cats (3–5). In 2002, Wolfs et al. described a human CPXV infection transmitted by a wild rat (6). We report an epidemiologically linked cluster of 5 cases of human CPXV infection caused by contact with a litter of pet rats (Rattus norvegicus).

Within 4 days, 5 patients with skin lesions suggestive of an OPV infection were reported to the Infectious Disease Task Force at the Bavarian Health and Food Safety Authority. Infected patients were from 2 unrelated families living in 2 different counties in the greater Munich area, Germany. The families had bought 1 and 2 rats, respectively, from the same pet shop on December 15 and December 17, 2008. Source tracing showed that the pet shop owner had sold a litter of 8 rats to 7 different households in the greater Munich area. The pet shop owner had purchased the litter from a Bavarian rat breeder 7 days before the last rat in the litter was sold. These rats had been kept in cages separate from animals of different species. No symptoms of OPV infection were reported in the rats or any another animal in the pet shop. Moreover, all pet shop workers remained free of signs and symptoms. The pet shop owner denied purchasing any animals from abroad that could have been related to the 2003 US monkeypox outbreak (7), although he did acknowledge owning another breeding facility in the Czech Republic. Inspection of the breeding facility in Bavaria found 4 rats with crusts suspicious for OPV infection. Mice, hamsters, rabbits, and degus (Octodon degus) were also bred in the facility, but none had clinical signs of OPV. A total of 31 rats from the facility were tested for OPV infection by oral swabs and serology.

Figure 1. Cowpox lesions on rats and humans during an outbreak in Germany, 2009. A) Rat named Shiva (strain named after this rat) with lesions on the right hind limb; it died 1...

Members of 6 households were interviewed; 1 customer gave a wrong address. According to their owners, all pet rats were asymptomatic when purchased, but 2 rats (1 in each family with a human OPV infection) died after 9 and 14 days, respectively. One rat had distinct skin lesions on its extremities, mouth, and nose (Figure 1, panel A); the other had only 2 very small lesions on its front leg and nose. Two additional rats from the litter in 2 other households were euthanized due to clinical suspicion of OPV infection; 3 rats were assessed as healthy by their owners.

In households 1 and 2 (Table) with human cases of infection, 2 and 3 persons, respectively, reported only direct skin contact with their pet rats since the first day of purchase. All patients had circumscribed nodules with central necrosis and inflamed edges. Skin lesions were up to 1.5 cm in diameter. Notably, the onset and severity of symptoms were apparently associated with a patient’s VV vaccination status: 2 girls (patients 2 and 5, each 16 years of age with no history of VV vaccination) had multiple lesions on the neck, chest, and abdomen (Figure 1, panel B) accompanied by fever and local lymphadenopathy. Incubation periods for these 2 patients were 3 and 5 days, respectively. In contrast, the incubation period for 2 VV-vaccinated mothers (patients 1 and 3, 42 and 40 years of age, respectively) and for the VV-vaccinated grandmother of 1 of the girls (patient 4, 60 years of age) was >7 days. All showed less severe symptoms (Figure 1, panel C) without fever or lymphadenopathy and only 1 small skin lesion on the neck or chest.

In household 3, one person was receiving cyclosporine therapy after a kidney transplantation. She already owned 4 rats before purchasing another rat from the infected litter. After 35 days, skin lesions developed in all of her rats, including the initially asymptomatic index rat. All were euthanized due to clinical suspicion of OPV. Fortunately, the kidney transplant patient without previous VV vaccination did not develop signs or symptoms suggestive of CPXV infection. Nevertheless, we collected a blood sample and swabs from her throat and a recent rat-bite finger wound. 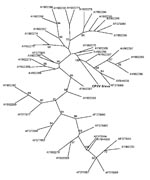 Various specimens (skin biopsies, crusts, oral swabs, serum, and whole blood) obtained from 5 patients and from rats from 3 households and 31 other rats (9–39) from the local breeding facility in Bavaria were sent to the Bavarian Health and Food Safety Authority (Table). Depending on specimen type, various investigations were performed (Table). Skin biopsy and crust specimens were homogenized and inspected for typical OPV-like particles by using by electron microscopy. Virus isolation for these materials was performed using standard procedures. DNA from all samples was extracted using the QIAamp DNA Mini Kit (QIAGEN, Hilden, Germany) according to the manufacturer’s instructions. For OPV DNA detection, the RealArt Orthopoxvirus LC Kit (QIAGEN) was used. For species identification, the products of a second PCR, spanning the entire open reading frame of the hemagglutinin gene (8,9), were sequenced. Datasets were edited and aligned using BioEdit (10). BLAST search (www.ncbi.nlm.nih.gov/blast/Blast.cgi) was performed to confirm species identification of the isolated strain as well as similarity with published CPXV strains. A phylogenetic tree was constructed using the maximum parsimony method with the Phylogeny Inference Package version 3.68 (http://evolution.genetics.washington.edu/phylip.html) with 100 bootstraps; the tree was drawn with TreeView version 1.6.6 (http://taxonomy.zoology.gla.ac.uk/rod/treeview.html) (Figure 2). OPV-specific serum antibody titers were determined using an immunfluorescence test based on VV-infected cells and either an antihuman or an antirat immunoglobulin G fluorescein-labeled conjugate (Dako, Hamburg, Germany).

Besides molecularly proven wild rat-to-human CPXV transmission (6) an additional CPXV infection probably transmitted from a pet rat was reported (11). Recently, 4 human infections acquired from pet rats were reported to the reference laboratory for poxviruses at the Robert Koch Institute (12). We describe a CPXV outbreak among 5 patients caused by infected pet rats from the same litter. CPXV infections seem to be increasing (13), but because CPXV infections in humans and in most animals (e.g., cats and rats) are not notifiable, this increase remains an assumption. One obvious reason for an increase might be the fading cross-protective immunity to OPV after the cessation of VV vaccination (14). In our small cluster, the onset and severity of symptoms seemed to be correlated with VV vaccination status; however, although patients reported similar contact with pet rats, patient age and manner of infection might confound this hypothesis (15).

The rising popularity of pet rats might also be a point of concern in a population with decreasing cross-protection to OPV and an increasing number of immunocompromised persons. Our findings emphasize the necessity to monitor OPV infections in humans and all animals (e.g., notification requirement) and to improve public awareness. Our outbreak investigation underlines the importance of close cooperation between human health and veterinary authorities in the management of zoonotic diseases.

Dr Campe is a clinical virologist with a strong interest in respiratory and enteric viruses, human herpesvirus Type 7, and viral disease in immunosuppressed patients.

This study was partly supported by a grant from the Federal Ministry of Education and Research (BMBF; 13N9559) to P.Z. and A.S.