Using geographic information system and molecular tools, we characterized a possible outbreak of tuberculosis caused by Mycobacterium tuberculosis Beijing strain in 17 patients in Cotonou, Benin, during July 2005–October 2006. Most patients lived or worked in the same area and frequented the same local drinking bar. The isolates were streptomycin resistant.

In a previous survey aimed at investigating the genetic biodiversity of Mycobacterium tuberculosis in Cotonou, Benin (1), we observed a higher prevalence of strains belonging to the Beijing genotype than has been reported in other studies in West and Central Africa (2–4). In that survey, we applied the results of spoligotyping and typing using a 12-loci mycobacterial interspersed repetitive unit–variable number tandem repeat (MIRU-VNTR) profile to identify the genetic lineage of the strains. In the study described here, we further investigated the identified Beijing strains by characterizing them with the more discriminatory set of 24-loci MIRU-VNTR (5). We also mapped the residences and workplaces of the patients by using geographic information system (GIS) technology.

From July 2005 through October 2006, a survey was conducted on 194 isolates of M. tuberculosis obtained from 194 patients with pulmonary tuberculosis (TB) (1 isolate per patient) (1). Patients were recruited from the National Hospital for Pneumology and Phtisiology in Cotonou, Benin, where most TB patients from the area are treated. Cotonou is the largest city in Benin, with a population of 655,000 in 2002 and an area of 79 km2.

All patients gave informed consent. The study was approved by the National Tuberculosis Program Board of Benin.

Among these 194 isolates, 17 belonged to the Beijing ST1 family and exhibited the same 12-loci MIRU-VNTR pattern (223325163533). One isolate showed additional alleles at many loci. The median age of the patients infected with the M. tuberculosis strains belonging to the Beijing genotype (28 years) was similar to that of patients from the general survey (30 years).

Demographic data that included date of birth, age, sex, and places of residence and work were collected from each patient. Geo-coordinates of each patient’s residence and workplace were obtained by using the Global Positioning System (GPS) and mapped with the ArcView 3.2 software (ESRI, Redlands, CA, USA). We also sought to map a place habitually frequented by the patients.

Blood samples for HIV testing were collected from each patient. HIV testing was performed by using an ELISA. Seropositive samples were confirmed by a discriminatory HIV1/2 test (Genie II HIV1/HIV2; Bio-Rad, Marnes-la-Coquette, France).

One sputum sample from each patient was decontaminated by using the modified Petroff method and cultured in manual Mycobacteria Growth Indicator Tube (MGIT) (6) and on Löwenstein-Jensen (LJ) medium. All isolates were identified as M. tuberculosis complex by the para-nitrobenzoic acid method and tested for drug susceptibility against rifampin, isoniazid, streptomycin, and ethambutol by using the proportion method on LJ medium at the following respective concentrations: 40 µg/mL, 0.2 µg/mL, 4 µg/mL, and 2 µg/mL (7,8).

DNA was extracted by boiling a suspension of 2 drops of MGIT-positive cultures in 300 µL of 10 mmol/L Tris-HCl and 1 mmol/L EDTA, pH 8.0 (1× Tris-EDTA) for 5 minutes. MIRU-VNTR typing was performed at Genoscreen (Lille, France) by amplifying each of the 24 independent loci, and results were combined into digit allelic profiles (5).

All patients discussed here were born in Benin and had lived in the country since birth. How they became infected with the M. tuberculosis Beijing strain is unclear. However, because some inhabitants of Cotonou are immigrants from the Asian continent, this strain could have been brought into the country by migrant residents of the community.

Of the 17 M. tuberculosis isolates belonging to the Beijing genotype, drug susceptibility testing results were available for 16. All isolates from the 16 patients were resistant to streptomycin but susceptible to isoniazid, rifampin, and ethambutol. Of the remaining 177 isolates from the same survey, drug susceptibility testing was available for 127, of which only 13 (10.2%) were resistant to streptomycin. The M. tuberculosis Beijing strains in this survey were more likely to be resistant to streptomycin than were their non-Beijing counterparts (p<0.001). Other researchers have suggested that M. tuberculosis Beijing strains may be associated with drug resistance (9) and that the rapid spread of Beijing strains in some settings suggests an intrinsic virulence of this family (10). 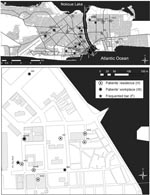 Mapping of patients’ residences and workplaces showed that many lived or worked (or both) in the Xwlacodji area of Cotonou (Figure). To further investigate this spatial cluster and a possible link between patients, we mapped a place they habitually frequented and found that most patronized the same drinking bar (Figure). Ten of the patients either lived or worked near the bar (<300 m) or regularly visited it. Although no epidemiologic link was evident between these patients and the remaining 7 patients, most of the latter were motorcycle taxi drivers and regularly moved from place to place.

Without GPS we could not have identified the geographic cluster of these patients with Beijing strains in Xwlacodji. The residents are poor, and overcrowding creates conditions favorable for transmission of diseases from person to person and rapid spread of the resistant M. tuberculosis Beijing strain.

We cannot completely exclude the unlikely possibility that the patients were infected by different strains with the same MIRU-VNTR pattern. However, the 17 strains’ identical 24-loci MIRU-VNTR profile, with a probable deletion of the same 2 loci; the identical drug susceptibility pattern (monoresistant to streptomycin); and the fact that most patients resided in the same community as determined by GIS strongly suggest that these strains are part of an outbreak.

Generally, molecular tools are used to study TB transmission and to suggest possible outbreaks. Although molecular tools can help identify an outbreak, they cannot localize it. GIS has rarely been used in health systems, particularly in resource-poor countries such as Benin (14). GIS tools might be dispensable in industrialized countries where streets and houses are properly mapped and pinpointing specific addresses is generally sufficient to localize an outbreak. In many low-income settings, however, streets and houses are not properly numbered and mapped, and using GPS is necessary to gain access to accurate geo-coordinates and localize such outbreaks. In the absence of genetic methods, differentiating cases from the same route of transmission from others is difficult. However, GIS can help TB control practitioners identify areas with aggregate cases so they can institute appropriate measures to control the disease.

Dr Affolabi is a microbiologist and associate professor at the University of Abomey Calavi, Benin.  His primary research activities include diagnostic microbiology and molecular epidemiology of mycobacteria.

We thank V. Ritacco and P. Suykerbuyk for critically reading the manuscript and for valuable suggestions.