To the Editor: Bolivian hemorrhagic fever (BHF) was first described in 1959 during outbreaks affecting isolated human communities in eastern Bolivia. However, it was not until 1963 that the etiologic agent, Machupo virus, was isolated from the spleen of a patient who died from this disease (1). Although no cases were reported between 1976 and 1993, an outbreak occurred in 1994 and sporadic cases have been observed since then.

In February 2008, at least 200 suspected new BHF cases (12 fatal) of BHF were reported to SEDES. A febrile hemorrhagic illness developed in a 19-year-old man from Huacaraje, Itenez Province (13°33′S, 63°45′W). On first examination at the Hospital Santa Maria Magdalena, the patient had fever, tremor, gingivorrhagia, petechiae, bruises, asthenia, and anorexia and was admitted with a presumptive diagnosis of BHF. Despite supportive treatment (including administration of plasma from a BHF survivor), his condition worsened; hematemesis, melena, hematochezia, hematuria, anuria, respiratory alkalosis, and metabolic acidosis developed in the patient, eventually resulting in death. A fifth case was detected in a 46-year-old man from San Ramon, Mamore Province (13°17′0′′S, 64°43′0′′W). A febrile hemorrhagic illness developed in the patient and he was admitted to the Hospital German Busch in Trinidad. The patient recently had been hired as a farm worker. When first seen by the attending physicians, he had fever, thrombocytopenia, leukopenia, petechias, tremors, gingivorrhagia, and dehydration, consistent with symptoms of BHF. The patient received hydration, corticoids, antipyretic therapy, and a plasma transfusion from a BHF survivor. The patient’s condition improved and he was subsequently discharged from the hospital ≈10 days after admission.

Nineteen serum samples collected from suspected BHF patients, including the cases described above, were sent to Centro Nacional de Enfermedades Tropicales (Santa Cruz, Bolivia) and the US Naval Medical Research Center Detachment (Lima, Peru) for testing. Serum was injected into Vero and C6/36 cells; 10 days later, the cells were tested for flaviviruses, alphaviruses, and arenaviruses by indirect immunofluorescent assay and PCR. Five arenavirus isolates were obtained from the patients described in this report. 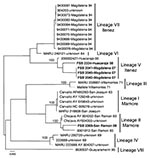 Viral RNA was extracted from the cell culture supernatant and the small (S) segment (≈3,200 bp) was amplified and sequenced. Phylogenetic analyses were conducted using the neighbor-joining and maximum likelihood program implemented in PAUP 4.0 software (Sinauer Associates, Inc., Sunderland, MA, USA). Sequence analyses confirmed the isolates as Machupo virus (Figure). Eight major Machupo phylogenetic lineages were described based on partial sequence of the nucleocapsid protein gene (2). We observed a similar tree topology based on the glycoprotein gene sequences (Figure). Two distinct lineages were distinguished among the isolates from the Itenez and Mamore provinces: V and VII and I and II, respectively. The recent isolates (2007–2008) from Magdalena and Huacaraje (Itenez Province) grouped within lineage V whereas the 2008 isolate from San Ramon (Mamore Province) belonged to lineage II. These isolates showed 10% nucleotide difference within the S segment and a 6% amino acid difference within the glycoprotein precursor gene. Similar genetic diversity has been described with Machupo virus and other arenaviruses (2–4). Sequences generated were deposited in GenBank (accession nos. FJ696411, FJ696412, FJ696413, FJ696414, and FJ696415).

It is not known whether lineage VII and I viruses continue to circulate or have been replaced by lineage V and II viruses, respectively. This study confirms the long-term maintenance of distinct phylogenetically forms of Machupo virus in a small area within Beni. Although the distribution of the Machupo virus rodent reservoir (Calomys callosus) extends beyond the geographic area of the Machupo cases described, factors that limit the endemic distribution of the virus remain unknown. However, population differences among C. callosus may account for the natural nidality of BHF (5). Studies are needed to fully identify and understand the ecology of the rodent reservoir and Machupo virus transmission.

Machupo virus continues to cause sporadic cases and focal outbreaks of BHF in Bolivia. We describe 5 confirmed human cases (3 fatal) of Machupo virus infection in Beni Department, Bolivia, an area in which BHF is endemic. That all 5 patients were farmers suggests their infections were probably acquired through occupational exposure. Although all the patients received plasma transfusion from patients who had survived BHF infection, 3 patients still died. An early diagnosis and the rapid administration of Machupo immune plasma before the hemorrhagic phase may increase the chance of survival, as has been observed with other arenavirus infections (6–8).

We thank Roxana Caceda and Juan Sulca for excellent technical assistance and the personnel of the Bolivian Ministry of Health for supporting our febrile illness surveillance study. Local activities were approved by the Ministry of Health of Bolivia and were developed by CENETROP personnel through local coordinators.