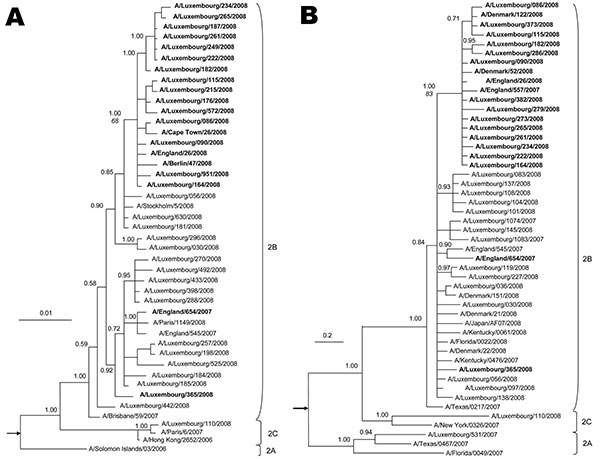 Figure. Phylogeny of A) neuraminidase (NA, complete gene) and B) polymerase complex 2 (C-terminal 1,300 nt) genes for selected influenza viruses A (H1N1) from Luxembourg and other countries. Subclades are identified to the right of each tree. The best-approximating model of nucleotide evolution was the general time reversible model with a gamma rate distribution and this model was used for the Bayesian analysis. Markov chain Monte Carlo sampling was implemented in MrBayes version 3 (8). In all cases, 6 chains with at least 4 million generations were calculated (10% burn-in removed). At least 2 independent runs of each analysis were performed. Posterior probabilities (indicated on important nodes) of the consensus tree topologies were estimated by sampling likelihood parameters every 125 generations. Boldface indicates sequences of oseltamivir-resistant influenza viruses A (H1N1) with the Tyr275 mutation in NA. In MEGA version 4, a neighbor-joining tree with 10,000 replicates was generated to calculate bootstrap values, shown in italics on the node dividing resistant and sensitive strains. Scale bars indicate nucleotide substitutions per site. The trees are rooted on A/New Caledonia/01/1999 and A/BrevigMission/1918 (indicated by arrows).