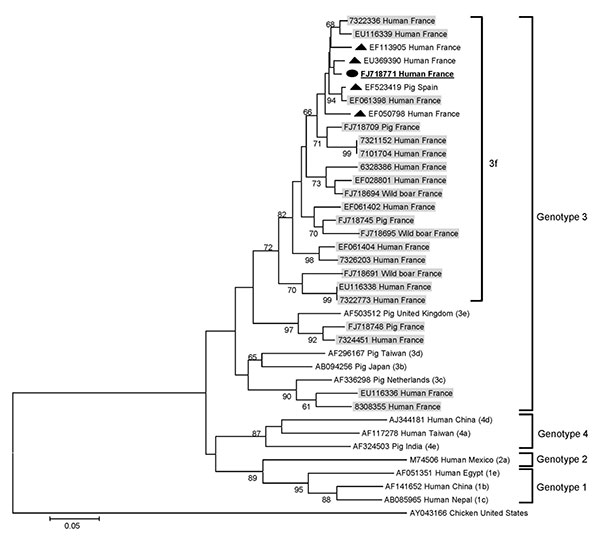 Figure. Phylogenetic tree based on partial nucleotide sequences (275 bp) corresponding to the 5′-end open reading frame 2 region of the hepatitis E virus (HEV) genome. Phylogenetic analysis included HEV sequence recovered in the present study (black circle, boldface and underlined; GenBank accession no. FJ71877) and sequences corresponding to the HEV sequences hits with the highest BLASTn score (http://blast.ncbi.nlm.nih.gov) to this sequence (black triangles), previously recovered in our laboratory (boldface), and of previously determined genotypes and subtypes (2) (in parentheses). Shading indicates sequences previously isolated in our laboratory. Bootstrap values >60% of 1,000 resamplings of the data are indicated. Avian HEV sequence AY043166 was used as an outgroup. The names of HEV sequences are labeled as follows: GenBank accession no., host, and country of origin where recovered. Scale bar indicates number of nucleotide substitutions per site.