During 2009, a total of 10,844 laboratory-confirmed cases of pandemic (H1N1) 2009 were reported in Beijing, People’s Republic of China. However, because most cases were not confirmed through laboratory testing, the true number is unknown. Using a multiplier model, we estimated that ≈1.46–2.30 million pandemic (H1N1) 2009 infections occurred.

Infection with a novel swine-origin influenza A (H1N1) virus, currently named pandemic (H1N1) 2009 virus, first occurred in the United States and Mexico in early April 2009 (1,2) and then rapidly spread to other regions of the world. As the outbreak expanded, laboratory testing of persons with suspected cases became increasingly impractical, extremely resource intensive, and was discontinued. We assume, therefore, that the number of laboratory-confirmed cases represents only a small fraction of the actual number of infections (3–5). In this study, we used a multiplier model to estimate the true number of cases of pandemic (H1N1) 2009 in Beijing, People’s Republic of China.

To estimate the prevalence of pandemic (H1N1) 2009 in the United States, the US Centers for Disease Control and Prevention (CDC) developed a software program (Impact2009, version 1.0) (6) based on the Monte Carlo approach and the multiplier model. Although this simple and useful program can be used to estimate the true number of cases in the United States, it may not be so readily applied to other countries because of uncertainties in the model parameters. To account for these uncertainties, in this study we decided to alter the way in which the baseline data assumptions were calculated. For example in the original CDC model, the prevalence was calculated on the basis of the laboratory-confirmed case data. In contrast, we calculated the baseline case number by multiplying the reported number of influenza-like illness (ILI) cases in secondary and tertiary hospitals by the positive rate of pandemic (H1N1) 2009 among ILI cases. We obtained this information from the Beijing influenza surveillance system, which encompasses data on ILI cases from all secondary and tertiary hospitals (levels 2, 3), and virologic surveillance data (7). 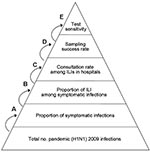 Figure. Model parameters for estimating the true number of persons infected with pandemic (H1N1) 2009 in Beijing. A, hospitals refer to level 2 and 3 hospitals in Beijing; B, sampling success rate...

During phase 1, the number of laboratory-confirmed cases was considered to reflect the true number of pandemic (H1N1) 2009 infections. However, during phase 2, we calculated the true number of infections by multiplying the baseline by the estimation coefficient, using the multiplier model. In this multiplier model, the baseline case number was equal to the sum of the product of the weekly ILI case number in level 2 and 3 hospitals and the corresponding weekly pandemic (H1N1) 2009 positive rate among case-patients with ILIs. The estimation coefficient was found by multiplying the reciprocal of the parameters in the model. The following parameters were required in our estimation: the proportion of symptomatic infection among patients with cases of pandemic (H1N1) 2009, the proportion of ILI among patients with symptomatic cases of pandemic (H1N1) 2009, the consultation rate among ILI case-patients, the sampling success rate, and the sensitivity of the test (Figure; Table 1). These terms were obtained from a review of the literature (8–12) and from recommendations by health professionals. We assumed that the consultation rate of ILIs in each of the 2 periods was consistent and that the syndromic profile of pandemic (H1N1) 2009 did not change greatly.

Despite the small number of laboratory-confirmed cases (10,844), we estimated that the actual number of persons infected with pandemic (H1N1) 2009 was 1.8 million in Beijing by the end of 2009. Previous studies have claimed that the number of laboratory-confirmed cases of pandemic (H1N1) 2009 was substantially underestimated, reflecting only a very small fraction of the actual infections (3–5). This study also demonstrated that school age children were more likely to be infected with pandemic (H1N1) 2009. However, those >60 years of age were at low risk for infection.

In phase 1, the number of laboratory-confirmed cases was considered to reflect the true infection number. This assumption, however, may lead to an underestimation for 2 reasons. First, we ignored the parameters used in phase 2, and second, difficulties occurred in testing all of the samples taken from patients who sought consultation for ILIs. Nevertheless, because the pandemic did not spread in the community in phase 1, we believe that this underestimation would have been quite low.

Although, in theory, serologic surveys should provide an accurate record of the infection rate of pandemic (H1N1) 2009, they failed to provide a quicker and more representative result than the multiplier model. Given the similarities between the estimates obtained from the model and the estimates obtained from the serologic survey, we conclude that the multiplier model based on the Monte Carlo approach should be considered a useful and simple method for estimating the true number of infections during a pandemic.

Dr Xiaoli Wang is a medical epidemiologist at the Institute for Infectious Disease and Endemic Disease Control of Beijing Center for Disease Prevention and Control. Her research interests are the epidemiology of respiratory infectious diseases and early-warning surveillance systems for emerging infections.