Dengue virus (DENV) is an arthropod-borne virus that infects ≈100 million persons each year in Southeast Asia, Central and South America, and Africa. Infection with any 1 of the 4 DENV serotypes causes a wide range of disease, from dengue fever to the more severe dengue hemorrhagic fever. Epidemics of dengue-like illness have occurred in Africa, but information about etiology is limited (1). Transmission of another arthropod-borne virus, chikungunya virus, which causes disease similar to dengue, has been documented in Tanzania. Although Tanzania is on the list of countries at risk for DENV transmission (2), to our knowledge, no DENV isolates have yet been identified and studied there.

In Japan as of June 16, 2010, a total of 50 cases of imported dengue had been reported. Among these cases, 2 were dengue fever that had developed in 2 travelers after they returned from Tanzania. We report the molecular characterization of 2 DENV type 3 (DENV-3) isolates from 1 of the travelers who had visited Tanzania in 2010 and from a traveler who had visited Côte d’Ivoire in 2008.

In 2010, a 55-year-old man (patient 1) and a 23-year-old woman (patient 2) returned to Japan from Tanzania; high fever and thrombocytopenia developed in each on days 1 and 3 days after return, respectively. In 2008, a 65-year-old man (patient 3) returned to Japan from Côte d’Ivoire and subsequently experienced high fever. Serum samples from each of the 3 patients were sent to the National Institute of Infectious Diseases, Japan, for laboratory examination. DENV serotypes were determined by serotype-specific reverse transcription–PCR (RT-PCR) (3). DENV-specific immunoglobulin (Ig) M was detected by Dengue Fever Virus IgM Capture ELISA (Focus Diagnostics, Inc., Cypress, CA, USA) used according to the manufacturer’s instructions. Dengue IgG Indirect ELISA (Panbio Ltd, Sinnamon Park, Queensland, Australia) was used to detect anti-DENV IgG according to the manufacturer’s instructions. Serum from patient 1 was negative for anti-DENV IgM and anti-DENV IgG; serum from patients 2 and 3 was positive for anti-DENV IgM and IgG. All 3 serum samples had positive DENV nonstructural protein (NS) 1 antigen results according to NS1 capture ELISA (Platelia Dengue NS1 Antigen assay; Bio-Rad Laboratories, Marnes-la-Coquette, France) and negative chikungunya viral RNA results by RT-PCR.

DENV-3 (D3/Hu/Tanzania/NIID08/2010) was isolated from patient 1, and DENV-3 (D3/Hu/Côte d’Ivoire/NIID48/2008) was isolated from patient 3 by using the Aedes albopictus mosquito cell line C6/36 and FcγR-expressing baby hamster kidney cells (4). DENV-3 RNA was detected in serum from patient 2 by RT-PCR, but the virus was not isolated. The viral RNA was extracted by using a High Pure Viral RNA Extraction kit (Roche Diagnostics, Mannheim, Germany), transcribed to cDNA, amplified by PCR, and sequenced as described (3). 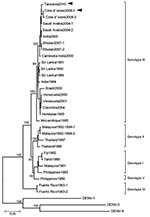 Figure. Phylogenetic tree based on the envelope genome sequence of selected dengue virus type 3 (DENV-3) strains. The tree was rooted to DENV-1, DENV-2 and DENV-4. Multiple sequence alignments were performed, and...

Nucleotide sequences of the isolates were compared with selected sequences of DENV-3 (Table). Sequence alignment and phylogenetic analysis was performed by the Genetyx analysis program (Genetyx Corp., Tokyo, Japan). The phylogenetic tree was constructed by using the neighbor-joining method. The selected DENV-3 strains were grouped into 5 genotypes (5). Confidence values for virus groupings were assessed by bootstrap assembling analysis of 1,000 replicates. The 2 DENV-3 isolates belonged to DENV-3 genotype III (Figure). The envelope (E)-protein sequence showed that the DENV-3 (D3/Hu/Tanzania/NIID08/2010 strain) isolated from patient 1 had a sequence homology of 98% to the DENV-3 D3/Hu/Côte d’Ivoire/NIID48/2008 strain and 99% to a DENV-3 6805 strain isolated in Saudi Arabia in 2004 (GenBank accession no. AM746229) (6).

DENV transmission has occurred in western Africa and some parts of eastern Africa (7–10). We isolated DENV-3 from 2 patients in Japan in whom dengue fever developed after they returned from Côte d’Ivoire (western Africa) and Tanzania (eastern Africa). Detection of DENV-3 in patients 1 and 2 suggests local DENV-3 transmission in Tanzania. As of April 2010, at least 17 suspected cases of dengue have been reported among residents of Dar es Salaam, Tanzania, but the molecular epidemiology of DENV in Tanzania has not been analyzed (11). In the absence of such analyses, data on molecular epidemiology of DENV isolated from returning travelers offers timely information to countries where dengue surveillance is not routinely performed. Data and reports of the presence of a competent DENV vector, Ae. aegypti mosquitoes, suggest the need for further studies on local DENV transmission in Tanzania (12).

It is assumed that travelers increase the risk for introduction of DENV serotypes or strains from disease-endemic to non–disease-endemic areas where competent vectors such as Ae. aegypti or Ae. albopictus mosquitoes are present. The sequence homology among the DENV-3 strain isolated from the traveler to Tanzania (patient 1), the DENV-3 strain isolated from the traveler from Côte d’Ivoire in 2008 (patient 3), and a DENV-3 strain isolated in Saudi Arabia in 2004 ranged from 98% to 99% (GenBank accession nos. AB549332, AB447989, AM746229, respectively). Because the E-protein gene of the isolate from Tanzania was highly similar to those in viruses circulating regionally and the Middle East, the disease could have been introduced or reintroduced into the country from neighboring areas. These data suggest the need for further studies of the route of disease dissemination and surveillance of dengue in Africa. Genetic differences among subtypes may result in differences in virus virulence and epidemic potential (13). DENV-3 genotype III, previously isolated from several parts of Africa, Latin America, and the Indian subcontinent, has been associated with higher incidence of major epidemics of dengue and dengue hemorrhagic fever (14). The DENV isolates from Tanzania and Côte d’ Ivoire were closely related to a DENV-3 genotype III strain isolated from a major DENV outbreak in northern India in 2003–2004; the E-protein gene homology was 98% (15).

Emergence of DENV-3 genotype III in geographically diverse areas may thus result from higher epidemic potential of the virus, although further studies are needed to understand the clinical and epidemiologic implications of emergence or reemergence of the virus in Tanzania and Côte d’ Ivoire. Whereas other vector-borne diseases such as malaria and yellow fever have been well studied in Africa, dengue needs more attention with regard to identification of epidemics, clinical implications, and disease management.

Dr Moi is a researcher at the National Institute of Infectious Diseases, Tokyo, Japan. Her research interest is the immunopathogenesis of flavivirus infection.

This work was supported by grants for Research on Emerging and Re-emerging Infectious Diseases (H21-shinkou-ippan-005 and H20-shinkou-ippan-015) from the Ministry of Health, Labour and Welfare, Japan.

Page created: March 09, 2011
Page updated: March 09, 2011
Page reviewed: March 09, 2011
The conclusions, findings, and opinions expressed by authors contributing to this journal do not necessarily reflect the official position of the U.S. Department of Health and Human Services, the Public Health Service, the Centers for Disease Control and Prevention, or the authors' affiliated institutions. Use of trade names is for identification only and does not imply endorsement by any of the groups named above.