To the Editor: Triatoma infestans bugs, the main vector of Chagas disease, historically occupied a large area from northeastern Brazil to Chubut Province in Patagonia, Argentina (1). Large-scale insecticide spraying during the 1980s and 1990s reduced its geographic range and abundance and interrupted transmission of Trypanosoma cruzi, mainly in Uruguay, Chile, and Brazil (2). However, T. infestans and transmission of T. cruzi persist in the Gran Chaco, a large ecoregion in Argentina, Bolivia, and Paraguay (3).

Chubut Province has historically been an area with no risk for vector-mediated transmission of T. cruzi; only its extreme northern region was categorized as having a low transmission risk (4,5). However, increased immigration from disease-endemic rural areas in Argentina and Bolivia into Chubut has raised concerns about accidental introduction of T. infestans in travelers’ luggage (1) and establishment of a transmission cycle. 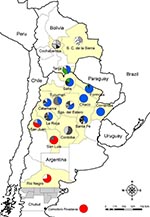 Appendix Figure. Location of Comodoro Rivadavia (Chubut) and mitochondrial cytochrome oxidase I haplotype frequencies among Triatoma infestans bugs in provinces in Argentina and departments in Bolivia. Colors and patterns in circles indicate frequencies...

In January 2007, we conducted a province-wide survey of 21 villages in Chubut Province previously infested with T. infestans bugs by using 0.2% tetramethrin as a dislodgant agent (1 person-hour/house); no T. infestans bugs were detected (Appendix Figure). Only T. patagonica bugs were found in 11% of peridomestic structures, and none were infected with T. cruzi. In June 2007, a T. infestans–like bug was found in a primary healthcare center in Comodoro Rivadavia (45°51′S, 67°28′W), a city in southern Chubut Province (Appendix Figure). Healthcare center staff reported visits by immigrants from Bolivia a few days before this finding and suspected them to be the source. The bug was identified morphologically as a T. infestans female and it laid 6 eggs. PCR amplification of kinetoplast DNA showed that it was not infected by T. cruzi.

DNA sequence analysis is useful for investigating evolutionary history and population structure within Triatominae (6). T. infestans bugs from Bolivia and Argentina showed genetic differences for nuclear (7) and mitochondrial markers (6), including mitochondrial cytochrome oxidase I (mtCOI) (8). We used our mtCOI haplotype database, which includes published (8) and new domestic, peridomestic, and sylvatic T. infestans from 65 locations in 13 provinces in Argentina (n = 346) and 3 departments in Bolivia (n = 144), to analyze the mtCOI sequence of the bug found in southern Patagonia and determine if it could be assigned to a known haplotype from Bolivia or Argentina. We investigated phylogenetic relationships with other haplotypes by using neighbor-joining and Bayesian approaches. 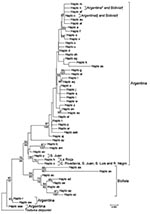 Figure. Phylogenetic relationships between mitochondrial cytochrome oxidase I gene haplotypes of Triatoma infestans from Argentina and Bolivia. The neighbor-joining tree was constructed by using MEGA 4.1 (www.megasoftware.net) and bootstrap values (based...

Our mtCOI database included 53 haplotypes: 42 were found in Argentina, 9 in Bolivia, and 2 in both countries (Figure). The bug from southern Patagonia had haplotype x, which has been found in only 3 western or southern provinces in Argentina (San Juan, San Luis, and Rio Negro) (8; Appendix Figure).

We investigated the geographic origin of non-native putative attendees of the healthcare center in San Cayetano. These persons were immigrants from Bolivia and from northern (Salta and Jujuy), western (Mendoza, San Juan, and San Luis), and southern Argentina (Rio Negro), i.e., from the 3 putative sources of the bug. These immigrants typically pay extended visits to their home towns at least once a year and transport luggage in which the bug could have traveled. In 2006, San Juan had the highest levels of domestic and peridomestic infestation with T. infestans (35% and 21%, respectively), including urban infestation (9). Mendoza (not in our database) had considerable domestic and peridomestic infestations (both 7%), and San Luis (0.5% and 5.3%, respectively) and Rio Negro (both <0.1%) had low infestations in 2001 (4) and thereafter (C. Spillmann, unpub. data). Bolivia, Salta, and Jujuy are excluded as potential sources of the bug because haplotypes closely related to haplotype x were not found in these places. Active dispersal from a local source can be ruled out because there is no precedent for T. infestans in Comodoro Rivadavia, and the mean temperature in June (8°C) is below the known threshold for flight initiation (23°C) (10).

Our results show that molecular phylogenetics can identify passive transport of insects into areas where a disease is not endemic and rule out putative sources supported only by circumstantial evidence. Our findings reinforce the need for sustained and coordinated vector surveillance and control at a regional level (3).

We thank Mirko Rojas-Cortez for providing samples from Bolivia, Ricardo Váez for assisting in bug searches, Fernando Garelli and Juan Gurevitz for carefully reading the manuscripts and suggestions, and Marcela Rodriguero for helpful discussions on an earlier version of the manuscript.

This study was supported by research grant no. R01 TW05836 from the National Institutes of Health Fogarty International Center and the National Institute of Environmental Health Sciences to U.K. and R.E.G., and by grants from the Universidad de Buenos Aires and Agencia Nacional de Promoción Científica y Técnica (Argentina) to R.E.G. R.V.P., M.V.C., and R.E.G. are scientific investigators of Consejo Nacional de Investigaciones Científicas y Técnicas (Argentina).