Massive adipose tissue depositions in the abdomen and thorax sufficient to interfere with respiration developed in a patient with multiple medical problems. Biopsy of adipose tissue identified human adenovirus 36 (Adv 36) DNA. Adv 36 causes adipogenesis in animals and humans. Development of massive lipomatosis may be caused by Adv 36.

Several human studies have shown a correlation of antibodies to Adv 36 and obesity (4–8). In 1 study of >500 persons, 30% of obese persons and 11% of lean persons had antibodies to Adv 36 (4). The body weight of infected persons was ≈25 kg heavier than that of uninfected persons (4). In 26 pairs of twins with discordant Adv 36 antibody status, infected twins were heavier and fatter (4). In a group of obese school children from South Korea, 30% had antibodies to Adv 36, and infected children had higher body mass index z-scores than uninfected children (5). However, in animals and adults in the United States, serum cholesterol and triglyceride levels were paradoxically reduced, despite the obesity (1–4). Recent reports of adults in Italy and children in South Korea support the association of Adv 36 and obesity, and show that Adv 36 is more common in obese persons; prevalence ranges from 29% to 65% (6,7).

The mechanisms responsible for the increased adiposity are changes in gene expression of multiple enzymes and transcription factors by the virus (8–15). In adipocytes, the sterol regulatory element binding protein pathway is increased, resulting in increases in levels of sterol regulatory element binding protein 1 and fatty acid synthase. Because levels of transcription factor CCAAT/enhancer binding protein-β, peroxisome proliferator-activated receptor-γ, and lipoprotein lipase are also increased, lipid transport into cells and fatty acid synthesis within cells is increased (8–15). In muscle cells, gene expression of glucose transporters Glut 1 and Glut 4 and phosphoinositide 3-kinase is increased, which results in noninsulin-mediated increases in glucose transport (14).

These changes are thought to be caused by the action of the Adv 36 open reading frame 1 early region 4 gene and may be blocked by small interfering RNA or the antiviral drug cidofovir (11,13). When the open reading frame 1 early region 4 gene was transferred to a retrovirus and inserted into preadipocytes in vitro, the gene was capable of inducing the enzymes and enhancing fat accumulation (13).

Adv 36 DNA persists in multiple tissues of infected animals for long periods after initial infection (3). Viral DNA was isolated from brain, lung, liver, muscle, and adipose tissue of monkeys 7 months after initial infection, long after the active virus has disappeared from blood and feces (3). The virus DNA apparently continues to alter gene expression chronically in tissues.

We report a patient with massive fat deposits in the thorax and abdomen. We postulate that these abnormal adipose tissue deposits were caused by Adv 36 infection. 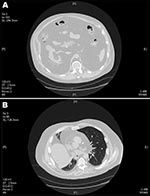 Figure 1. Computed tomography scans of the patient, showing marked visceral adipose tissue in the abdomen (A) and thorax (B). Diffuse intrabadominal, retroperitoneal lipomatosis, and herniation of the mediastinum can be seen through...

During the next 7 years, prostate cancer, rectal ulcer necessitating colon diversion, hemolytic anemia, thrombocytopenia, myelodysplastic syndrome, and diabetes mellitus developed in the patient; he was treated with insulin for the diabetes. He was hospitalized for respiratory insufficiency in August, 2007, which was thought to be caused or exacerbated by massive intrathoracic and intraabdominal fat deposits. He had obesity of his neck, lateral chest, and abdomen, but limited subcutaneous fat in his abdomen and upper extremities. He had no buffalo hump, round facies, or other signs of Cushing syndrome. The patient had tachycardia with muffled heart sounds, dullness in the base of the right chest, and bibasilar diminished breath sounds. A computed tomography scan of the chest and abdomen showed fatty densities extending into the intrabdominal, intraperitoneal, and retroperitoneal areas and herniating through the esophageal hiatus into the mediastinum (Figure 1). These fatty densities extended within the pericardium without definite pericardial effusion.

As a control, samples of adipose tissue obtained by needle fat biopsy from 12 obese persons without abnormal adipose tissue deposits were evaluated by nested PCR and quantitative PCR by using proprietary Taqman primers and probe (Obetech, Richmond, VA, USA). These persons provided written informed consent. Samples for quantitative PCR were analyzed with an ABI Step One PCR apparatus (Applied Biosystems, Foster City, CA, USA). Two of the 8 samples assayed by nested PCR were positive and 5 of 12 samples assayed by quantitative PCR were positive. The prevalence of Adv 36 infection identified by PCR was similar to that identified by serum neutralization in obese adults in the United States (5).

Adv 36 DNA in the adipose tissue of this patient documents that he was infected with this virus. The propensity of Adv 36 to increase visceral adipose tissue in experimentally infected animals suggests that the abnormal adipose tissue deposits within the abdomen and chest cavities and in the subcutaneous spaces of the chest and neck could be caused by Adv 36 infection. He was being treated with replacement corticosteroids but did not have signs of Cushing syndrome.

Dr Salehian is an associate clinical professor of diabetes, endocrinology, and metabolism in the Department of Diabetes at the City of Hope and Beckman Research Institute, Duarte, California. His primary research interests are glucocorticoid myopathy, thyroid cancer, metabolism and nutrition in patients with critical illnesses, and cachexia.

We thank Susan Ward for performing the PCR assays and Ellen Anderson for assistance with collecting the control samples.

This study was supported by the City of Hope and Beckman Research Institute and the Obetech Obesity Research Center.