Dengue virus type 3 genotype I was detected in Brazil during epidemics in 2002–2004. To confirm this finding, we identified this virus genotype in naturally infected field-caught Aedes aegypti mosquitoes and eggs. Results showed usefulness of virus investigations in vectors as a component of active epidemiologic surveillance.

Dengue virus (DENV) is a member of the family Flaviviridae and a positive-sense RNA virus. Epidemics caused by the 4 DENV serotypes have emerged as major public health problems in tropical and subtropical regions over the past 20 years (1). DENV is transmitted to humans by the bite of an infected mosquito. Female Aedes aegypti mosquitoes are the main vector involved in the urban transmission cycle of the virus. Ae. aegypti is a tropical mosquito that lays its eggs on the walls of containers commonly found in and around homes (1). Female mosquitoes remain infectious for their entire lives and have the potential to transmit virus during each human feeding.

Mosquitoes and larvae may be infected by vertical transmission and maintain the virus in nature (2). Spread of the mosquito vector and virus has led to a resurgence of dengue fever epidemics and the emergence of dengue hemorrhagic fever (DHF) (3). No dengue vaccine is currently available, and dengue control relies solely on vector control. For successful epidemiologic investigations, identification and typing of DENV from field-caught mosquitoes and eggs are needed.

Traps designed to catch mosquitoes and eggs were installed in an urban residential area in the northwestern borough of Belo Horizonte, Minas Gerais, Brazil. Since 1998, Belo Horizonte has had a high concentration of dengue cases and high rates of vector infestation. Mosquitoes were obtained during 8 weeks (during October 2005–May 2006). Adult mosquitoes were collected by using 2 capture traps (Figure 1, panels A and B): MosquiTRAP version 2.0 (M trap; Ecovec Ltd., Belo Horizonte, Brazil) (7) and the BG-Sentinel trap (BG trap; Biogents, Regensburg, Germany) (8). Eggs were collected with an ovitrap (Figure 1, panel C) and hatched into larvae (9).

An area of 20 blocks was selected for the survey. In each block, 3 representative houses were selected, and each house received 1 type of trap. All traps were installed outdoors in a shaded area that was also protected from rain. Within each block, traps were rotated so that each house had only 1 trap type for a maximum of 1 week. Mosquitoes collected were identified by sex, trap, and epidemiologic week. Eggs collected were counted, identified by epidemiologic week, and hatched into larvae. All samples were stored at –70°C until analyzed (Table 1).

Pools of <30 mosquitoes and <50 larvae were triturated on ice, macerated in 300 µL of Leibowitz L15 medium (GIBCO-BRL, Gaithersburg, MD, USA), and centrifuged at 2,000 × g for 5 min. RNA from each pool was extracted according to a modified protocol (10) and used as template in a reverse transcription–PCR as described (11). To amplify the virus genome, a seminested PCR was conducted with a forward primer (5′-CGA GAA ACC GCG TGT CAA C-3′) designed to amplify a 434-nt region that contains the capsid–premembrane (C-prM) gene and a reverse primer as described (11). The PCR products were then used for sequencing (MegaBACE sequencer; GE Healthcare, Little Chalfont, UK). Sequences and inferred amino acid sequences were aligned with other available DENV-3 sequences. 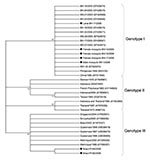 Figure 2. Phylogenetic tree of dengue type 3 serotypes and sequences from Aedes aegypti mosquitoes and larvae obtained in Belo Horizonte, Minas Gerais, Brazil. The tree is based on a 434-nt sequence of...

Our results suggest that the DENV-3 strains circulating in Minas Gerais, Brazil, in 2005 and 2006 may share a common origin. We identified (6) co-circulation of 2 DENV-3 genotypes (I and III) in Brazil (6,12). DENV-3 isolates detected in Rio de Janeiro, Brazil, during the 2001 and 2002 outbreaks and DENV-3 detected in Latin America were assigned to genotype III, which has been associated with DHF outbreaks (13). DENV-3 genotype I identified in outbreaks during 2002–2004 in Minas Gerais (6) also showed associations with DHF. This genotype was also identified in Colombia (14) and French Guiana (14). Sequences showed high similarity to isolates from Southeast Asia and the South Pacific islands and have not been previously reported in South America.

Detection of DENV-3 genotype I in sylvatic animals (15) may support the hypothesis of a sylvatic origin for this genotype in South America. Our analysis of C-prM gene sequences from mosquitoes naturally infected with DENV-3 confirmed circulation of genotype I in Minas Gerais. Additionally, our results indicated that dengue virus sequences in mosquitoes and larvae are highly similar to sequences in DENV-3 isolates from patients who are spatially and temporally related. Although vertical transmission has not been routinely determined (2), our findings also confirmed that vertical transmission of DENV that may be a major factor in virus prevalence and survival in nature.

We thank Angela Lopes, Ilda Gama, and Andreza Carvalho for secretarial and technical assistance; and Fabrício Santos for assistance with sequencing.