To determine the prevalence of helminthic infections in Pursat Province, Cambodia, we tested fecal specimens from 471 children, 10–14 years of age, in June 2007. The prevalence of infection with echinostome flukes ranged from 7.5% to 22.4% in 4 schools surveyed. Adult worms were identified as Echinostoma revolutum.

Echinostomes (family Echinostomatidae) are intestinal trematodes of birds and mammals, including humans. Echinostomiasis can result in severe epigastric or abdominal pain accompanied by diarrhea, easy fatigue, and malnutrition (1). Heavy worm loads may lead to death due to intestinal perforation or marked malnutrition and anemia, as has been reported for infection caused by an echinostome species, Artyfechinostomum malayanum (under the name Artyfechinostomum mehrai), in India (1).

A total of 20 species of echinostomes that belong to 8 genera (Echinostoma, Echinochasmus, Acanthoparyphium, Artyfechinostomum, Episthmium, Himasthla, Hypoderaeum, and Isthmiophora) infect humans worldwide (1). Echinostoma revolutum, the most widely distributed species, is found from Asia and Oceania to Europe and the Americas (1). The first reported human infection was in Taiwan in 1929 (2). The prevalence of E. revolutum flukes in Taiwan during 1929–1979 varied from 0.11% to 0.65% (3). Small E. revolutum–endemic foci or a few cases of human infection were discovered in the People’s Republic of China, Indonesia, and Thailand until 1994 (4,5). However, no information is available about human E. revolutum infection after 1994, even in areas where the parasite was previously endemic.

In Cambodia, humans are commonly infected with intestinal nematodes and protozoa, including hookworms, Strongyloides stercoralis, Ascaris lumbricoides, Trichuris trichiura, and Giardia lamblia (6,7). However, with the exception of the blood fluke Schistosoma mekongi, infection with trematodes or cestodes has seldom been reported (8). Echinostomatid eggs have been detected in schoolchildren in 2 provinces, Battambang and Kampongcham (9,10), but adult worms were not collected for identification. The Korea Association of Health Promotion, South Korea, and The National Institute of Malaria, Entomology, and Parasitology, Ministry of Health, Cambodia, have been conducting an international collaboration to control intestinal helminthiases in schoolchildren in Cambodia (2006–2011). In June 2007, we conducted a fecal survey in 4 primary schools in Pursat Province, Cambodia, and found that an average of 11.9% of schoolchildren had positive test results for echinostome eggs. Adult worms recovered after the children received treatment with praziquantel and underwent purgation with magnesium salts were identified as E. revolutum. We report echinostomiasis as an endemic trematode infection among schoolchildren in Pursat.

The surveyed areas were lakeside (the Tonle Sap Lake) villages in Pursat Province (Figure 1) where ≈12,000 persons, including 3,500 schoolchildren, live. For this study, 471 children (237 boys), 10–14 years of age, from 4 primary schools were selected. One fecal sample from each child was collected in June 2007. Samples were transported to the Malaria Station in Pursat within 2–3 days of collection and stored at 4°C until examination. The Kato-Katz thick smear technique was used to detect helminth eggs. Examination of feces and anthelmintic treatment were officially approved by the Ministry of Health, Cambodia, under the agreement of the Korea-Cambodia International Collaboration on Intestinal Parasite Control for Schoolchildren in Cambodia.

Four children who had positive test results for echinostomatid eggs and who had occasional, vague abdominal pain and discomfort were selected for anthelmintic treatment and adult worm recovery at the Malaria Station. After we obtained consent from their parents and the school guardian, the children’s infections were treated with a single oral dose of 10 mg/kg praziquantel (Shinpoong Pharmceutical Co., Seoul, South Korea), and purged with 20 g magnesium sulfate. Whole diarrheic feces were collected 3–4 times and pooled individually. The diarrheic feces were processed as previously described (11). Worms were collected by using a wooden applicator and washed several times in water. They were fixed with 10% formalin under coverslip pressure, stained with acetocarmine, and identified by morphologic features. 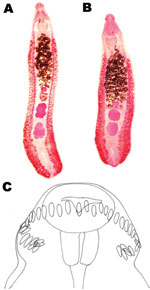 Figure 2. Echinostoma revolutum specimens recovered from schoolchildren in Pursat Province, Cambodia, which had 2 testes in the postequatorial region. A) An adult worm (8 mm long) showing lobulated testes. B) Another adult...

The major sources of E. revolutum infection in humans are freshwater clams (Corbicula producta) in Taiwan and snails (Physa occidentalis or Lymnaea sp.) in Thailand (1,5). According to school personnel, the children were fond of eating undercooked snails or clams of unidentified species sold on the road to their homes after school. They stated that the mollusks are caught near Tonle Sap Lake. Reasons for the higher prevalence in school A than schools B, C and D are unclear.

Of the schoolchildren living near Tonle Sap Lake, Pursat Province, Cambodia, who participated in this study, 7.5%–22.4%, depending on school, were infected with E. revolutum. E. revolutum trematodes are endemic parasites in this area of Cambodia and a likely source of infection is freshwater snails or clams from the lake. The public health significance of echinostomiasis and educational and prevention efforts should be highlighted.

Echinostomiasis is not only an endemic infectious disease in Asian countries, including Cambodia, but also can be imported by overseas travelers from the United States or Europe. An outbreak of echinostomiasis was reported among US travelers returning from Kenya and Tanzania, although the source of infection was uncertain (12). This diagnosis should also be considered in patients with abdominal pain and diarrhea who have traveled to Southeast Asia and eaten snails or clams.

Dr Sohn is a professor in the Department of Parasitology and Institute of Health Sciences, Gyeongsang National University School of Medicine, Jinju, South Korea. His major research area is foodborne zoonotic parasites, including echinostomes, heterophyids, and gnathostomes.

We thank the staffs of the National Institute of Malaria, Entomology, and Parasitology, Ministry of Health, Cambodia, for preparing the Kato-Katz smears for the schoolchildren. We also thank Hyun-Mi Kim, Yu-Jung Kim, Jae-Young Park, Geun-Hoon Lee, Hoo-Gn Jeong, and Chong-Kyun Shin, Korea Association of Health Promotion, for their help in reading Kato-Katz fecal smears.