Multidrug-resistant Klebsiella pneumoniae and Escherichia coli isolates harboring New Delhi metallo-β-lactamase (NDM-1) were isolated from a patient who had returned to Canada from India. The NDM-1 gene was found on closely related incompatibility group A/C type plasmids. The occurrence of NDM-1 in North America is a major public health concern.

Carbapenem-hydrolyzing β-lactamases, i.e., carbapenemases, in bacterial clinical isolates are an increasing concern because they often also confer resistance to most other β-lactam antimicrobial agents. Among Enterobacteriaceae, carbapenemases are mainly found in the Ambler class A penicillinase or class B metallo-enzyme groups. VIM and IMP are the most frequently acquired class B enzymes and are commonly found in southern Europe and the Far East, rarely in North America. Klebsiella pneumoniae carbapenemase (KPC) class A has been found worldwide, although it emerged in the eastern United States in the mid 1990s and subsequently has successfully established itself in multiple states (1).

Recently, a new class B enzyme, New Delhi metallo-β-lactamase (NDM-1), was characterized from a K. pneumoniae isolate from Sweden; the bacteria seem to have been imported from India (2). Enterobacteriaceae isolates harboring NDM-1 have now been found in multiple areas of India and Pakistan and in the United Kingdom (3–5); such isolates were recently reported from 3 US states (6). In Canada, carbapenemase-harboring isolates are rare, reported only for a small outbreak of clonal Pseudomonas aeruginosa isolates harboring IMP-7, P. aeruginosa isolates harboring VIM-2, a Serratia marcescens isolate harboring a SME-2 class A β-lactamase, and 3 isolates of K. pneumoniae harboring KPC-3 (7–10). We characterized NDM-harboring clinical isolates from a patient who had recently traveled to India.

A 76-year-old woman returned to Vancouver, Canada, in early 2010 after spending 3.5 months in northern India. Before her trip, she had been in good health. In India, persistent nonbloody diarrhea developed, for which she did not seek medical attention. One month later, she was treated in the hospital for hypertension and congestive heart failure. She was discharged 3 days after admission but readmitted 3 days later because of ongoing diarrhea and decreased consciousness. Unspecified encephalitis and a urinary tract infection were diagnosed, but despite antibacterial drug therapy, her neurologic status did not improve over the next 3 weeks. She was discharged from the hospital in India and transferred to Canada.

When she arrived at the hospital in Vancouver on February 14, 2010, her vital signs reflected distributive shock: temperature 38.3°C, blood pressure 100/80 mm Hg, and heart rate 126 beats/minute. Sepsis was suspected and she was given imipenem and vancomycin. Within 24 hours, her level of consciousness had deteriorated, and she was admitted to the intensive care unit and intubated for airway protection. Blood cultures were negative, but urine culture (>1 × 108 CFU/mL) grew highly drug-resistant K. pneumoniae N10–0469 (February 15, 2010) with intermediate resistance to chloramphenicol and susceptibility to colistin. The urine was packed with leukocytes, and no other source for sepsis was found. A perirectal sample, screened for resistant gram-negative rods, grew K. pneumoniae N10–0506 and E. coli N10–0505 (February 16, 2010). A stool specimen was negative for ova and parasites but positive for Clostridium difficile toxin.

The patient was given vancomycin and metronidazole for the C. difficile infection and colistin for the K. pneumoniae infection. Treatment with colistin was discontinued shortly after its initiation because of the onset of renal complications; treatment with chloramphenicol was successful. Test results for infectious causes of encephalitis (e.g., malaria smears, cerebrospinal fluid culture for bacteria, and staining for acid-fast bacteria and fungi) were negative, as were test results for cryptococcal antigen, herpes simplex viruses 1 and 2, Japanese encephalitis virus, and rabies virus. Results of computed tomographic scans, magnetic resonance imaging of the head, and an electroencephalogram were suggestive of global metabolic encephalopathy. Neurologic symptoms did not improve, despite the successful treatment of the urinary tract infection. Subsequently, E. coli N10–0705 isolate with an extended-spectrum β-lactamase phenotype was obtained from urine on March 9, 2010, for which the patient was treated with imipenem.

Ventilator and vasopressor support were eventually removed, and the patient was transferred to the general medicine ward. Several days later, her condition worsened and she died; the final diagnosis was toxic metabolic leukoencephalopathy, probably related to sepsis. The patient’s family refused to allow an autopsy. 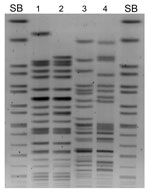 Antimicrobial drug susceptibility testing by Sensititer panels ESB1F and CMV1AGNF (Trek Diagnostic Systems, Cleveland, OH, USA) found that all 4 isolates were multidrug resistant and that 3 of the 4 isolates, not E. coli N10–0705, were nonsusceptible to carbapenems (Table 2). Nonsusceptibility to carbapenems was also shown by Etest (bioMérieux, St. Laurent, Quebec, Canada) and disk diffusion (Table 2). K. pneumoniae N10–0469 and E. coli N10–0505 were susceptible to colistin, polymixin B, and tigecycline. 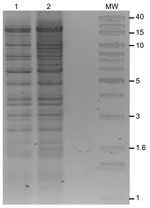 Transformant susceptibility to aztreonam is consistent with the inability of class B enzymes to efficiently hydrolyze this drug. Transformants exhibited lower carbapenem MICs than did clinical isolates, likely reflecting total β-lactamase content and additional resistance mechanisms such as porin mutations in the clinical isolates (Table 2). The recent emergence of blaNDM-1 in India has been linked to its spread on the Inc A/C-type, IncF1/FII-type, or unknown plasmid types (3). Analysis for class 1 integron cassettes found that both plasmids contained a 0.8-kb cassette that coded for aac(6′)-Ib–type aminoglycoside 6′-N-acetyl transferase. PCR for the ISCR1 element associated with some class 1 integrons was negative. Plasmids harboring NDM-1 plasmids were successfully transferred by conjugation from K. pneumoniae N10–0469 and E. coli N10–0505 to recipient strain E. coli RG192 (rifampin resistant).

North America has thus far escaped the widespread establishment of metallo-β-lactamase–harboring organisms. Therefore, the emergence of blaNDM-1-harboring Enterobacteriaceae in North America is of concern because such isolates exhibit resistance to drugs commonly used to treat gram-negative infections (β-lactams, fluoroquinolones, and aminoglycosides) and have shown a propensity to spread rapidly (4–6)).

Dr Mulvey is chief of the Antimicrobial Resistance and Nosocomial Infections section of the National Microbiology Laboratory of the Public Health Agency of Canada. His research interests include molecular epidemiology of antimicrobial drug resistant pathogens.