Seasonal Influenza A Virus in Feces of Hospitalized Adults

In a cohort of hospitalized adults with seasonal influenza A in Hong Kong, viral RNA was frequently (47%) detected in stool specimens. Viable virus was rarely isolated. Viral RNA positivity had little correlation with gastrointestinal symptoms and outcomes. In vitro studies suggested low potential for seasonal influenza viruses to cause direct intestinal infections.

Although influenza predominantly causes respiratory diseases, gastrointestinal signs such as diarrhea and vomiting are not uncommonly reported, particularly among young, hospitalized children (8%–38%) and immunocompromised persons (1–3). Influenza virus RNA has been detected in feces, but its role is unknown (4–7). We investigated fecal viral RNA shedding in a large cohort of hospitalized adults with seasonal influenza A in Hong Kong Special Administrative Region, People’s Republic of China. The potential of seasonal influenza viruses to cause direct intestinal infections was examined.

We conducted a prospective, observational study among adults hospitalized with laboratory-confirmed seasonal influenza A infections during 2006–2009. Hospital admission, diagnosis, and management procedures have been described (8). Briefly, patients were admitted if severe symptoms, respiratory or cardiovascular complications, or exacerbations of underlying conditions developed. When the patients sought care, nasopharyngeal aspirates (NPAs) were collected for diagnosis by using immunofluorescence assay or reverse transcription PCR. Patients with confirmed influenza A were recruited if they were >18 years of age and sought care within 1 week of illness onset. Patients with pandemic (H1N1) 2009 virus infections were excluded and reported separately (9).

After providing written, informed consent, patients were asked to submit 1 stool specimen for viral RNA detection during hospitalization, regardless of gastrointestinal symptoms. Clinical information was prospectively recorded (8). For comparison, fecal shedding of respiratory syncytial virus (RSV) and parainfluenza virus (PIV) were studied during a 10-month period by using a similar approach. Ethical approval for the study was obtained from the institutional review boards of The Chinese University of Hong Kong.

A total of 119 hospitalized adults with seasonal influenza A infections were studied (Table 1). Their median age was 71 years (interquartile range [IQR] 57–79 years), and most (66%) had concurrent conditions; ≈5% were profoundly immunosuppressed. Vomiting and diarrhea were reported by 15 (13%) and 7 (6%) patients, respectively. Influenza A viral RNA was detected in 56 of 119 of stool samples, collected at a median interval of 3 days (IQR 3–5 days) from onset (detection rates by study year and virus subtype are shown in Table 2). Detection rate by day from onset ranged from 31% to 63% and showed a trend to decrease toward the end of the week (Figure 1, panel A). Overall, the mean ± SD fecal viral RNA concentration was 4.4 ± 0.8 log10 copies/g of feces and the median (IQR) was 4.2 (3.8–5.0) log10 copies/g of feces; concentrations tended to decrease with longer time elapsed from onset (Figure 1, panel B).

In most (77%) viral RNA–positive samples, further H1- or H3-specific PCRs identified 7 cases as H1 and 36 cases as H3; unsuccessful amplification was associated with lower viral (matrix gene) concentrations (median [IQR] 3.9 [3.8–4.1] vs. 4.4 [3.8–5.1] log10 copies/g of stool; p = 0.04). No discrepancy was found between these and the subtyping results of the virus isolates from NPAs. Fecal viral RNA detection rate and concentrations were similar between H1 and H3 subtypes (Table 2).

Thirty-eight stool samples from 1 seasonal peak were subjected to virus isolation and viral RNA detection. In 10 cases, cytotoxicity occurred (procedure discontinued); in the remaining 28 cases, 12 were viral RNA positive; only 1 showed virus growth. This sample was from an 82-year-old man with dilated cardiomyopathy hospitalized for seasonal influenza A (H1N1) pneumonia and heart failure; diarrhea was absent. 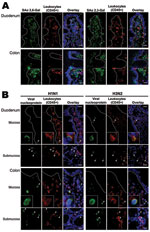 Figure 2. Intestinal distribution of influenza virus receptors and in vitro binding of inactivated seasonal influenza A (H1N1) and A (H3N2) viruses to human duodenal and colonic tissues. Images in the panels labeled...

Lectin histochemical analysis showed that sialic acid α 2,6-Gal (human-like influenza virus receptor) was absent from epithelial surface of small and large intestines and was found only in lamina propria cells. In contrast, sialic acid α 2,3-Gal (avian-like influenza virus receptor) was found on large intestinal epithelial cells and in lamina propria cells. Virus-binding study showed that neither seasonal influenza A (H1N1) nor A (H3N2) virus bind to small and large intestinal epithelial surface, but they bind to a subset of CD45+ leukocytes (Figure 2).

Direct intestinal infection by seasonal influenza viruses seems an unlikely explanation for the frequent fecal detection of viral RNA in the patients reported here. No clinical correlation was shown for RNA positivity (but was shown with lymphopenia and positive virus isolation in NPA, indicating higher virus load), and culture positivity is rare (4,5,10,11). Human-like influenza virus receptor is not found to express on normal intestinal epithelial cells (12). These findings agree with reports which showed that intestinal cells and tissues do not support efficient replication of seasonal viruses (12,13), thus their low potential to cause direct intestinal infection. Alternatively, swallowing of virus-containing nasopharyngeal secretions (although it seems inadequate to explain the higher rate of detecting fecal viral RNA than RSV or PIV) and hematogenous dissemination to organs through infected lymphocytes or macrophages in severe influenza cases with high virus load (spillover) are possible explanations for fecal viral RNA detection (2,14). Our findings on virus receptor distribution and in vitro virus binding to intestinal lamina propria leukocytes lends support to the latter hypothesis. Notably, viral RNA positivity in nonpulmonary tissues infiltrating mononuclear cells without detectable viral particles or antigens or tissue damage has been reported (15). Our study does not reject the possibility of seasonal influenza viruses causing occasional, disseminated infection in profoundly immunosuppressed persons because receptor affinity is not absolute (2). Conversely, highly pathogenic avian influenza (H5N1) and pandemic (H1N1) 2009 viruses have the ability to bind to avian-like influenza virus receptors on colonic epithelium and to replicate efficiently in intestinal cells and tissues (12). Their enhanced potential to cause direct intestinal infections and fecal–oral transmission deserve further investigation.

Dr Chan is a postdoctoral fellow at the Institute of Digestive Disease, The Chinese University of Hong Kong. His research focuses on respiratory and gastrointestinal infections, especially those caused by influenza viruses and noroviruses, respectively.

Seasonal Influenza A Virus in Feces of Hospitalized Adults