Influenza B Viruses with Mutation in the Neuraminidase Active Site, North Carolina, USA, 2010–11

Oseltamivir is 1 of 2 antiviral medications available for the treatment of influenza B virus infections. We describe and characterize a cluster of influenza B viruses circulating in North Carolina with a mutation in the neuraminidase active site that may reduce susceptibility to oseltamivir and the investigational drug peramivir but not to zanamivir.

During routine influenza antiviral susceptibility surveillance, an influenza B virus, B/North Carolina/11/2010, with reduced susceptibility to oseltamivir and the investigational NAI peramivir was detected by using the fluorescent NAI assay based on IC50 values (amount of NAI required to inhibit 50% of viral NA activity). According to the current algorithm, viruses with elevated IC50 values, when compared with a drug-susceptible control reference virus, are further investigated by using either conventional sequencing or pyrosequencing. Sequence analysis for the NA gene of B/North Carolina/11/2010 showed a novel substitution, present as a mixed population, of isoleucine (I) to valine (V) at position 221 (B NA numbering corresponds to 222 in N2 NA amino acid numbering). A substitution of I to threonine (T) at 221 has previously been associated with reduced susceptibility to NAIs in influenza B viruses (1,5,9). Moreover, reduced susceptibility to oseltamivir has been reported in viruses with variation at the corresponding residue (223, N1 NA numbering) in the pandemic (H1N1) 2009 virus (11,12) and in influenza A/H5N1 (13) and A/H3N2 viruses (14).

Subsequent fluorescent NAI testing of isolates recovered during surveillance showed a cluster of 14 influenza B viruses from North Carolina with elevated oseltamivir IC50 values compared with reference wild-type influenza B, wild-type pandemic (H1N1) 2009, and wild-type A(H3N2) viruses; a similar trend was observed for peramivir IC50 values (Table 1). When comparing the pandemic (H1N1) 2009 virus with the oseltamivir-resistance conferring H275Y substitution and an influenza A (H3N2) virus with the oseltamivir-resistance conferring E119V substitution, the North Carolina B viruses showed intermediate susceptibility (Table 1). The influenza B virus carrying the R152K substitution was resistant to all NAIs compared with the influenza B viruses with I221V (Table 1). In the chemiluminescent NAI assay, the oseltamivir IC50 values for the I221V variants were greater than that for the E119V influenza A (H3N2) virus variant, which has been associated with oseltamivir resistance (Table 1) (15). Pyrosequencing analysis showed I221V as well as wild-type (I221) in the propagated viruses used in the NAI assays. The presence of wild-type variants is likely to reduce IC50 values.

A total of 258 influenza B virus isolates from domestic and foreign laboratories submitted to the Centers for Disease Control and Prevention for routine surveillance were screened for the I221V substitution by using single-nucleotide polymorphism (SNP) pyrosequencing analysis (10). All viruses were wild type at this position, with the exception of the 14 viruses from North Carolina with reduced susceptibility in the NAI assay (Table 2). All 14 viruses were collected from patients in North Carolina during November 2010 through February 2011.

Because some susceptibility-altering NA mutations have been shown to arise from virus propagation in tissue culture (15), pyrosequencing analysis at position 221 in available matching clinical specimens was performed to rule out cell culture selection. The I221V substitution was identified in the 9 available matching clinical specimens (Table 2). Notably, most of the clinical specimens contained higher percentages of the V221 variant compared with the matching virus isolates, which may indicate a potential selective pressure for the wild-type variant (I221) in cell culture.

An epidemiologic investigation and enhanced surveillance was initiated in cooperation with the North Carolina Department of Health and Human Services. Of 220 patients with influenza B virus infections in North Carolina during November 2010 through March 2011, specimens from 209 patients underwent pyrosequencing analysis. Specimens from 45 (22%) patients from 13 counties contained the I221V mutation based on SNP pyrosequencing analysis; patient median age was 12 years (range 6 months–60 years). Among 199 patients with available antiviral treatment information, specifically for oseltamivir use, none had documented exposure to the virus before specimen collection. This finding may indicate that influenza B viruses carrying the I221V mutation are co-circulating with wild-type influenza B viruses in North Carolina. 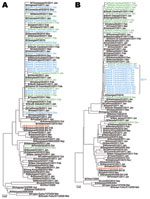 Phylogenetic analysis of the hemagglutinin gene of the North Carolina B viruses carrying the I221V change in the NA is consistent with the B Victoria lineage (Figure, panel A). Similarly, phylogenetic analysis of the NA gene demonstrated that the North Carolina B viruses with the I221V change also belong to the B Victoria lineage and form a cluster because of the I221V substitution (Figure, panel B). As of March 2011, of the 438 influenza B viruses isolated in the United States, 94% were antigenically characterized as B/Brisbane/60/2008-like (B-Victoria lineage) (www.cdc.gov/flu/weekly). The cluster of North Carolina influenza B viruses carrying the I221V mutation antigenically matched the current influenza B component of the seasonal influenza vaccine. Data collected from an ongoing epidemiologic and clinical correlation study will be the subject of a more detailed future report.

We thank all collaborators in the World Health Organization Global Influenza Surveillance Network, including the National Influenza Centers, for submission of isolates. We also thank members of the Molecular Epidemiology Team, the Virus Reference Team, and the Sequencing Group of the Influenza Division at the Centers for Disease Control and Prevention for contributions with this project.

Influenza B Viruses with Mutation in the Neuraminidase Active Site, North Carolina, USA, 2010–11