Genogroup I and II Picobirnaviruses in Respiratory Tracts of Pigs 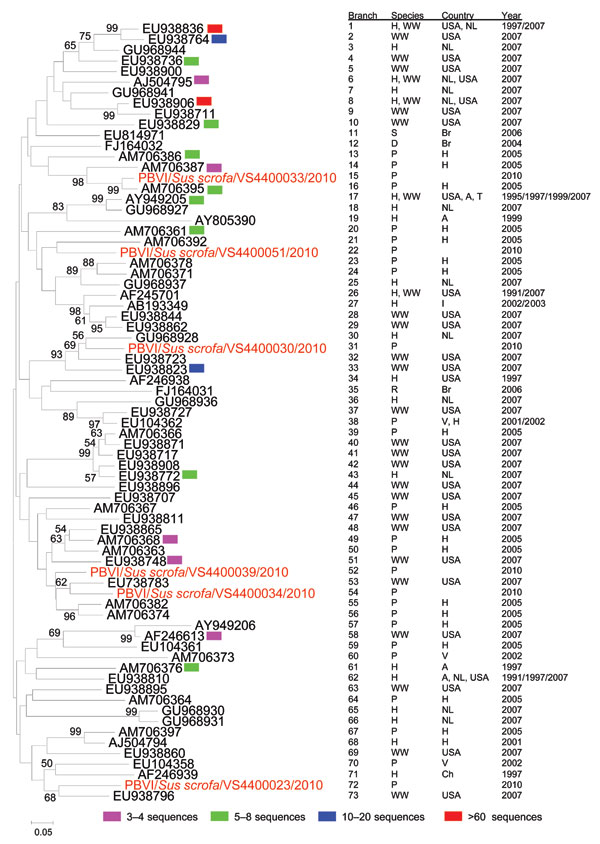 Figure A1. Neighbor-joining (Jukes-Cantor model) phylogenetic tree of an ≈165-bp fragment of the genogroup I picobirnavirus RNA-dependent RNA polymerase gene from known human, porcine, and wastewater genogroup I picobirnaviruses and newly characterized porcine respiratory genogroup I picobirnaviruses (sequences are available on request). Each branch represents a sequence or group of sequences (95% identical with gaps) depending upon the presence of a colored block. Every branch corresponds to the adjacent information, which indicates source, year of isolation, and location of virus variants. Reference sequences from published studies are identified by their GenBank accession numbers. For species, H, human; WW, wastewater; S, snake; D, dog; P; pig; R, rat. For countries of isolation, USA, United States; NL, the Netherlands; Br, Brazil; H, Hungary; A, Argentina; T, Thailand; In, India; V, Venezuela; Ch, People’s Republic of China. Sequences from newly identified porcine respiratory picobirnaviruses in this study are shown according to recent nomenclature proposals (7). Isolates in red are branches in which porcine respiratory picobirnaviruses are present. Scale bar indicates nucleotide substitutions per site.