Genogroup I and II Picobirnaviruses in Respiratory Tracts of Pigs

A thorough understanding of virus diversity in animals provides epidemiologic baseline information about potential pathogens and can lead to identification of emerging human pathogens. On the basis of relevance to reemerging viruses, such as Nipah virus and influenza A virus, pigs are a key risk host for emerging RNA virus–associated disease in humans in different areas (1–3). In an effort to identify unknown porcine viruses in the respiratory tracts of pigs, we performed sequence-independent amplification on partially purified viral nucleic acid from swab samples of respiratory tracts from pigs that were PCR negative for influenza A virus (4–6). 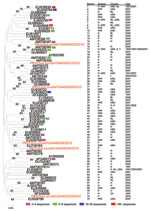 To determine genetic relationships between porcine respiratory genogroup I picobirnaviruses with reported genogroup I viruses detected in wastewater and human and porcine feces, a phylogenetic tree was constructed on the basis of a 165-nt fragment of the RdRP gene as described (6,10) (Figure A1). Genogroup I picobirnavirus nucleotide sequences from 6 porcine respiratory samples showed 58%–80% similarity with each other and belonged to different phylogenetic clades.

Because molecular characterization of picobirnaviruses is limited, mostly to partial RdRP sequences, and only 1 complete genome has been determined, the zoonotic potential of picobirnaviruses awaits further characterization of full-length genomes. Attempts to obtain full-length genomes in this study were undertaken by using next-generation sequencing platforms but were unsuccessful. However, the extent of sequence variation along the 165-bp fragments of the RdRP gene of genogroup I picobirnaviruses for which an entire RdRP gene sequence is available (strains 1-CHN-97, HY005102, and VS10, and GenBank accession nos. AB186898, AF246939, and GU968924) show good correlation with overall sequence variation observed in the entire RdRP gene (13).

A thorough understanding of the diversity of viruses in animals, virus transmission routes, and virus tropism provides epidemiologic baseline information about potential pathogenic threats from animal reservoirs for human health. Detection of genogroup I and II picobirnaviruses in porcine respiratory tract swab samples is an example of the needed expansion of our knowledge of picobirnavirus diversity and also expands our knowledge of picobirnavirus tropism. To better understand the epidemiology of genogroup II picobirnaviruses in pigs and to define whether zoonotic or reverse-zoonotic transmissions occur, more intensive surveillance on this group of virus in pigs from other regions needs to be conducted. Whether genogroup I and/or II picobirnaviruses can also be detected in the human respiratory tract and whether they play a causal role in respiratory diseases remain to be determined. This study illustrates how novel molecular techniques can provide new understanding of viral ecology, evolution, and spread.

Dr Smits is a research scientist in the Department of Virology at Erasmus Medical Center, Rotterdam, the Netherlands. Her research interests are the molecular biology and evolution of viruses.