To understand the emergence of vaccinia virus Cantagalo strain in the Amazon biome of Brazil, during 2008–2010 we conducted a molecular and epidemiologic survey of poxvirus outbreaks. Data indicate that animal movement was the major cause of virus dissemination within Rondônia State, leading to the establishment and spread of this pathogen. 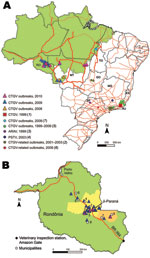 Outbreaks of vaccinia virus (VACV) infection in dairy cows and dairy workers have been frequently reported in Brazil during the past decade, mainly within the southeastern region (1–6), except for central Goiás (2) and Tocantins State in the northeastern boundary of the Brazilian Amazon biome (Figure 1) (7). VACV Cantagalo strain (CTGV) was first detected in 1999 and associated with several outbreaks (1,5,7). Related strains have been reported in subsequent outbreaks (2–4,6).

Mato Grosso State is partially inserted into the southeastern Amazon biome (Figure 1) and has the largest cattle population of Brazil, ≈26 million (8). It is the main connection with the Amazon states, especially with Rondônia. Rondônia has nearly 11.2 million cattle and is the largest milk producer in the region, yielding >720 million liters/year (8). Therefore, intense livestock trade occurs through the so-called Amazon Gate of Mato Grosso and Rondônia. Both states had previously been considered poxvirus disease–free.

From June 2008 through June 2010, we investigated outbreaks of poxvirus-related disease on 56 dairy farms of Mato Grosso and Rondônia (Figure 1). A probable case was defined as illness observed in any cattle from these farms that showed clinical signs consistent with a poxvirus-related infection: vesicopustular lesions on the udder and/or teats of cows or on muzzle and/or tongue of suckling calves, fever, lymphadenopathy, and remission after ≈3 weeks. A confirmed case was any probable case that was laboratory confirmed by PCR or that had an epidemiologic link to a farm with PCR-positive results. We considered as epidemiologic links the migration of dairy workers, animal movements, and location of neighboring farms. Each inspection generated an epidemiologic investigation form by the animal health agencies of these states. Human infection was noted with a description of lesions on hands, arms, and face.

A total of 52 samples of scabs were collected from cattle on 23 farms. DNA was isolated as described (5) and subjected to PCR by using the EACP primers to detect the full-length hemagglutinin (HA) gene, a marker for orthopoxvirus infection (1,5,7). To specifically detect CTGV, we used a reverse primer that annealed to the flanking regions of an 18-nt deletion in the HA gene, a molecular signature of the CTGV-like strains from Brazil (1,3,5). DNA from reference CTGV (1) was used as positive control, and VACV-WR and cowpox virus strain Brighton Red were used as negative controls (5). This strategy successfully identified CTGV-like isolates, as confirmed by DNA sequencing (5,7). Thirty-five samples, representative of the 23 farms (Table 1), were positive for both orthopoxvirus (full-length HA) and CTGV infections. This result strongly suggests that CTGV was the etiologic agent of disease in these farms. For further confirmation, we sequenced the HA, K2L, and C7L genes from 6 samples, as described (7). All sequences showed the 18-nt deletion in the HA gene as well as the 15-nt deletion within K2L found in all CTGV-like isolates (7,9). The relatedness of the virus isolates with CTGV-like isolates was confirmed by analysis of the nucleotide identity matrix (Table 2) and phylogenetic inference (data not shown).

Analysis showed disease prevalence among lactating cows and suckling calves to be 11.83% (1,231/10,407) (Table 1). These rates were lower than those for farms of southeastern states, which reached 50% to 80% (10). Factors that may account for this difference were more efficient surveillance systems in Mato Grosso and Rondônia and the notably larger herd size on Mato Grosso and Rondônia farms. In this study, 55.36% of the affected farms had >100 cattle (mean=253), in contrast to 90% of southeastern farms, which had <100 cattle (5,10). The economic losses were substantial because milk production was the major activity at 76.79% of the farms in this study; the income of 93.02% of those was solely based on dairy activities. In addition, 67.85% of the farms reported at least 1 infected dairy worker.

BR-364 is a 4,141.5-km highway with a major veterinary inspection station, the Amazon Gate, at the Mato Grosso–Rondônia border. Affected farms were mostly located along this main road connecting Mato Grosso with the Amazon region (Figure 1, panel A). Despite that, we could not establish an epidemiologic link between the outbreaks in Mato Grosso and Rondônia. In contrast, the spread and establishment of CTGV within Rondônia were evidently related to animal movement along BR-364. Outbreaks in Rondônia (Figure 1, panel B) were first reported in August 2009 after the First Rondônia Dairy Cattle Auction in the municipality of Ji-Paraná (Figures 1, 2), which is part of Rondônia’s major dairy region (11). According to auction records, animals were not traded from other states for this event. Therefore, the circumstances of CTGV entry into Rondônia are still uncertain, but informal animal trade should be considered as well as the pre-event translocation of temporary dairy workers from Mato Grosso, as reported by some farmers.

Cattle trade during the auction launched virus spread throughout the state, which was amplified by subsequent trading and human translocation (Figure 2). Animal movement was associated with the disease spread on 48.57% of farms, whereas migrating dairy workers and neighboring farms were associated with 22.86% and 28.57% of the cases, respectively. Conversely, in Mato Grosso, 13.04% of the farms were related to the virus spread by animal movement, whereas 60.87% were associated with migrating workers. On southeastern farms, dairy workers have also been associated with virus spread, but no quantitative data have been reported (5,10). The distinct pattern in Rondônia could be related to extraordinary intrastate cattle movement. Analysis of 459,884 cattle movement forms issued in 2009 revealed an intrastate translocation of 6,875,031 cattle, which corresponded to 29.34 cattle/km2 in contrast to 17.44 cattle/km2 in Mato Grosso. The occurrence of new CTGV outbreaks in 2010 supports a nonsporadic pattern of infection in Rondônia, highlighting the establishment of this zoonotic infection within the state.

This study investigated the appearance, establishment, and spread of CTGV infection into the Amazon biome. Our findings suggest that animal movement was the main cause of virus long-distance dissemination in Rondônia, whereas the migration of dairy workers was involved in the focal spread. Animal movement plays an essential role in cross-border spread of several disorders worldwide, including bovine tuberculosis, foot-and-mouth disease, and bovine diarrhea viruses (12–15). We suggest animal movement is also a notable risk factor for CTGV dissemination. According to the inspection station database at the Amazon Gate, 287,906 cattle were moved into Rondônia through BR-364 in 2008–2009, of which 12,501 stayed in Rondônia. Attention is needed to address the westward spread of this zoonosis into the Amazon biome, toward the third largest dairy region of Rondônia surrounding Porto Velho (Figure 1, panel B). Therefore, new regulations and intensified surveillance should be implemented to restrain CTGV spread, particularly in dairy regions with elevated rates of cattle trade for heifer replacements.

Dr Quixabeira-Santos is a veterinarian and a graduate student in the Pathology Department of the Universidade Federal do Mato Grosso, Cuiabá, Brazil, and at the Laboratory of Molecular Biology of Virus, Instituto de Biofísica Carlos Chagas Filho, Universidade Federal do Rio de Janeiro, Brazil. Her current research involves the study of molecular and epidemiologic aspects of poxvirus diseases in cattle.

We thank the Instituto de Defesa Agropecuária do Estado de Mato Grosso and Márcio Petró, Neivá Rabello, and the veterinarians from the Agência de Defesa Sanitária Agrosilvopastoril do Estado de Rondônia for their valuable support.