Multitarget Test for Emerging Lyme Disease and Anaplasmosis in a Serosurvey of Dogs, Maine, USA

To determine if the range of deer ticks in Maine had expanded, we conducted a multitarget serosurvey of domestic dogs (Canis lupus familiaris) in 2007. An extension of exposure to Borrelia burgdorferi to the northern border and local transmission of Anaplasma phagocytophilum throughout southern areas was found.

Over the past 2 decades, the range of Ixodes scapularis, the deer tick, vector of Lyme disease, anaplasmosis, babesiosis, and deer tick virus infections, has expanded in northern New England. Because Lyme disease and anaplasmosis affect humans and dogs (Canis lupus familiaris), serosurveys of canids have proved useful for monitoring emergence of these infections. Sample selection may be confounded when dogs that are remotely exposed, vaccinated, or treated with topical acaricides are included. In recent years, however, the advent of a multitarget, in-clinic test kit (SNAP 4Dx; IDEXX Laboratories, Westbrook, ME, USA) has increased the scope and efficiency of these serosurveys. The SNAP 4Dx tests for heartworm antigen and antibodies to Borrelia burgdorferi, Anaplasma phagocytophilum, and Ehrlichia canis on 3 drops of blood. Its sensitivity and specificity for antibodies against B. burgdorferi and A. phagocytophilum exceed 98% (1,2).

In Maine, deer ticks were first reported at a coastal site in 1988 and have since spread inland (3). Lyme disease has become a major public health problem; reported human cases reached 169 per 100,000 population in 1 mid-coastal county in 2008. Human cases of anaplasmosis and babesiosis are also being reported (4). In 1990, we conducted a statewide serosurvey to map B. burgdorferi–positive dogs and to correlate their distribution with reported human cases. Four percent of 828 samples were seropositive for B. burgdorferi, 89% of which were from dogs residing within 20 miles of the coast. No positivity was found among 102 dogs in the northern half of the state (5). Given the widespread acceptance of SNAP 4Dx tests by Maine veterinarians, we resurveyed dogs statewide in 2007 for exposure to B. burgdorferi and A. phagocytophilum. Data from questionnaires to veterinarians and dog owners enabled assessment of the influence of the use of Lyme vaccines and topical acaricides on canine serologic test results.

From 87 veterinary clinics solicited in 2007, we selected 47 on the basis of their size and geographic distribution. Each was supplied with 15–30 SNAP 4Dx kits (contributed by IDEXX Laboratories). Veterinarians were instructed to obtain samples from all dogs routinely tested for heartworm. In northern areas, where heartworm is rarely tested for, they were asked to collect samples from dogs undergoing surgery. They recorded each dog’s age, town of residence, Lyme disease vaccination status (ever or never vaccinated), and the test results. Each dog owner completed a form (99.6% response rate) to describe the dog, its function, history of unexplained lameness, travel history (town, state, visited within the past year), history of tick infestation, and use of tick control products (yes or no).

We summarized test results to town and county levels. We used Spearman rank correlation tests to examine associations between canine seropositivity, human Lyme disease cases reported to the Maine Center for Disease Control and Prevention (Augusta, ME, USA) (4), and the number of deer ticks submitted to our laboratory in 2007. We used B. burgdorferi and A. phagocytophilum test results and questionnaire responses to cross-tabulate responses and calculate the likelihood (odds ratios) of B. burgdorferi and A. phagocytophilum positivity as a function of risk factors by using χ2 tests of association. We considered differences significant at p<0.05. Analyses were conducted by using SAS version 9.2 for Windows (SAS, Cary, NC, USA).

Figure 1. Towns where dogs were tested for seropositivity to Borrelia burgdorferi (A) and Anaplasma phagocytophilum (B) in a statewide serosurvey of domestic dogs, Maine, USA, 2007. 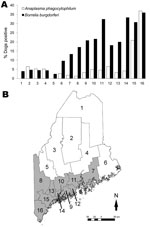 Figure 2. A) Canine seroprevalence for Anaplasma phagocytophilum and, in dogs never vaccinated against Lyme disease, for Borrelia burgdorferi in Maine counties arranged north to south, 2007. B) Maine counties, with the 10...

Of 1,087 dogs tested across Maine’s 16 counties, 12.7% were B. burgdorferi–positive and 7.1% were A. phagocytophilum–positive (Table 1); 1.9% were co-infected. The distribution of all dogs seropositive for either pathogen is shown by town in Figure 1. At the county level, canine B. burgdorferi seropositivity among unvaccinated dogs correlated positively with the number of human Lyme disease cases reported for 2007(ρSpearman = 0.84; p<0.0001) and the number of deer ticks submitted to our laboratory for identification (ρSpearman = 0.63; p = 0.009). In Figure 2, which shows statewide distributions by county north to south, only unvaccinated dogs are included in B. burgdorferi–positive data shown. Dogs had been exposed to A. phagocytophilum in all but 2 northern counties. At the town level, remarkably higher levels of canine A. phagocytophilum seropositivity were found in southern coastal Cape Elizabeth (Cumberland County) (76.5%, n = 17) and York (York County) (58.0%, n = 19) than in towns in their immediate vicinity.

Overall, 54.3% of the dogs had been vaccinated against Lyme disease. Never-vaccinated dogs were 1.5× as likely to be seropositive for B. burgdorferi than were vaccinated dogs (15.3% vs. 9.9%; p = 0.008) (Table 2). Vaccine use was higher in 10 southern counties where Lyme disease has become endemic (Figure 2, panel B) than in the 6 northern counties where it is emerging (63.9% vs. 42.7%; p<0.0001) and correlated positively with the number of deer ticks submitted to our laboratory for identification in 2007 (n = 16 counties, ρSpearman = 0.63; p = 0.009). Two thirds of respondents said that their dogs had traveled out of town; however, no associations were found between B. burgdorferi or A. phagocytophilum seropositivity and the dog’s travel history. Three of 59 dogs in the northernmost county of Maine were B. burgdorferi–positive, 1 of which had never traveled beyond its home town. Eighty-three percent of owners reported using acaricides. Despite the effective protection reported for topical acaricides (6,7), no difference in seropositivity between treated and untreated dogs was evident on the basis of their reported use (Table 2). Unexplained lameness was 1.5× more likely in dogs that were only A. phagocytophilum–positive than in those only B. burgdorferi–positive (40.0% vs. 26.5%; p<0.06).

This study demonstrates that risk of contracting Lyme disease has reached northernmost Maine and that anaplasmosis is now being transmitted to dogs throughout the lower half of the state. The study expands on nationwide SNAP 4Dx data documenting B. burgdorferi and A. phagocytophilum positivity in the southern half of the state (8). In southern coastal Maine, overabundant white-tail deer, appropriate habitat, and maritime climate all contribute to high densities of I. scapularis ticks (3) and consequent disease transmission; thus, the remarkably high level of A. phagocytophilum seroreactivity observed in the southern coastal towns of Cape Elizabeth and York calls for further work to understand the dynamics of the intense local emergence of this pathogen. The higher level of unexplained lameness in A. phagocytophilum–positive dogs than in B. burgdorferi–positive dogs is consistent with findings by Beall et al. (9), who reported a 2.6× greater incidence of A. phagocytophilum seroreactivity than B. burgdorferi seroreactivity among 32 lame, non–co-infected dogs in Minnesota who were suspected of having either disease. The lameness also reflects the high percentage of B. burgdorferi positivity among asymptomatic dogs (10). That B. burgdorferi and A. phagocytophilum seropositivity rates were essentially identical between dogs who had a history of travel and those who did not lessens concern about travel as a confounding variable, an exposure difficult to interpret in any event, given the spotty distribution of ticks even where Lyme disease is endemic (11).

In a recent study, Hamer et al. (12) reported that a serosurvey of canines for B. burgdorferi is ineffective in a region that includes areas with little B. burgdorferi transmission, and less informative than analysis of ticks removed from dogs. The authors referred to the confounding influence of tick chemoprophylaxis. Our inability to detect an effect of topical acaricides may reflect their ubiquitous use for flea control and a lack of information on the frequency of their use. Although the widespread use of protective measures now complicates interpretation of serosurveys of canines, in selected dogs the availability of a reliable, multitarget test that is used routinely nationwide (8) remains a valuable and cost-effective method for documenting transmission of the agents of Lyme borreliosis and anaplasmosis, particularly in areas where disease is emerging.

Dr Rand is co-director of the Maine Medical Center Research Institute Vector-borne Disease Laboratory. His primary research interests include the epidemiology and ecology of vector-borne diseases.

We thank Ramaswamy Chandrashekar for assistance with the multitarget test, the staffs of the 47 veterinary clinics for participating in this statewide serosurvey, and Linda Siddons for invaluable data entry.

This study was supported by a grant from the Elmina B. Sewall Foundation.

Multitarget Test for Emerging Lyme Disease and Anaplasmosis in a Serosurvey of Dogs, Maine, USA