An intrafamilial outbreak in West Bengal, India, involving 5 deaths and person-to-person transmission was attributed to Nipah virus. Full-genome sequence of Nipah virus (18,252 nt) amplified from lung tissue showed 99.2% nt and 99.8% aa identity with the Bangladesh-2004 isolate, suggesting a common source of the virus.

Nipah virus (NiV) causes encephalitis or respiratory signs and symptoms in humans, with high death rates (1–4). NiV outbreaks have been reported from Malaysia, Bangladesh, Singapore, and India (1,5–13). Cases in humans have been attributed to zoonotic transmission from pigs and bats (1,14). We describe a full genome sequence of NiV from an outbreak in India.

During April 9–28, 2007, five persons became ill and died within a few days at village Belechuapara, Nadia district, West Bengal, India, which borders Bangladesh. The index case-patient (case-patient 1) was a 35-year-old male farmer addicted to country liquor derived from palm juice. Hundreds of bats were observed hanging from the trees around his residence, which strongly suggested association with the infection of the index case-patient and possibility of contamination of the liquor with bat excreta or secretions.

No samples were available from the first 2 case-patients. Brain and lung tissues from case-patient 3, cerebrospinal fluid (CSF) from case-patient 4, and urine and CSF from case-patient 5 were collected. Blood samples were obtained from case-patients 4 and 5 and from 34 asymptomatic contacts from the village. Serum samples from these persons were tested for immunoglobulin (Ig) M and IgG antibodies to NiV (IgM/IgG anti-NiV) with ELISA by using reagents provided by the Centers for Disease Control and Prevention (Atlanta, GA, USA). To detect NiV RNA, urine (250 µL), CSF (100 μL), or autopsied brain or lung tissue (100 mg) were used, and RNA was extracted by using TRIzol LS and TRIzol reagents (Invitrogen Life Technologies, Carlsbad, CA, USA). Nested reverse transcription–PCR (RT-PCR) was conducted by using nucleocapsid (N) gene–based primers (8). 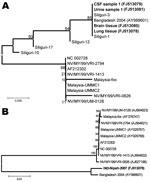 Before this report, similar cases had not been reported from the village or the surrounding area. Partial N gene sequences confirmed NiV in the clinical specimens from all 3 case-patients. Phylogenetic analysis showed that similar to findings from the 2001 outbreak study (8), viruses from Bangladesh and India clustered and diverged from the viruses from Malaysia. (Figure, panel A). The length of the full genome of the isolate from India was 18,252 nt. The sequence of this virus (INDNipah-07–1, GenBank accession no. FJ513078) was closer to the virus from Bangladesh (Figure, panel B), with 99.2% (151 nt substitutions) and 99.80% (17 aa substitutions) identity at nucleotide and amino acid levels respectively. Of the 151 nt substitutions, 9 occurred in the N open reading frame (ORF),11 in the phosphoprotein ORF, 8 in the matrix ORF, 11 in the fusion glycoprotein ORF, 7 in the attachment protein ORF, and 47 in the large polymerase ORF. Fifty-eight substitutions occurred in nontranslated regions at the beginning and the end of each ORF. The intergenic sequences between gene boundaries were highly conserved in the isolate from India, compared with the isolate from Bangladesh, which showed 1 change (GAA to UAA) between the attachment protein and large polymerase genes. No change was observed in the leader and the trailer sequences.

To our knowledge, this is the second report of an NiV outbreak in India, identified within 1 week of the investigation. The first outbreak affected mainly hospital staff or persons visiting hospitalized patients; the 74% case-fatality rate strongly suggested person-to-person transmission (8). Both outbreaks (2001 and 2007) occurred in the state of West Bengal bordering Bangladesh wherein several outbreaks of the disease have been reported (7,9–13). However, fruit bats from West Bengal have not been screened for evidence of NiV infection. This state needs to create awareness about NiV and obligatory testing of suspected case-patients.

NiV caused an intrafamilial outbreak with a 100% case-fatality rate, which confirmed person-to-person transmission. The NiV strains from India and Bangladesh were closer than the Malaysian viruses. Although the outbreaks occurred in neighboring geographic areas, NiV outbreaks in Bangladesh and India were not caused by the same virus strain or by spillover.

Dr Arankalle is a scientist at the National Institute of Virology in Pune, India. Her current research interests include hepatitis and emerging and reemerging viruses, such as chandipuravirus, chikungunya virus, avian influenza virus, Nipah virus, pandemic influenza (H1N1) 2009 virus, and undiagnosed viruses causing epidemics in India

We gratefully acknowledge support by Krishnangshu Ray and the cooperation of the officials of the Department of Health and Family Welfare, Government of West Bengal. We thank the staff of the Department of Virology, Microbiology and Tropical Medicine, School of Tropical Medicine, Kolkata. We also thank the Centers for Disease Control and Prevention for providing ELISA reagents.