A male nematode was extracted from iris fibers of a man from the Brazilian Amazon region. This nematode belonged to the genus Pelecitus but was distinct from the 16 known species in this genus. Similarities with Pelecitus spp. from neotropical birds suggested an avian origin for this species.

Filarial nematodes have been found in the eyes and periorbital region of humans worldwide (1–4). However, rarely have the worms been removed and morphologically described. The main human filarial parasites are Wuchereria bancrofti and Brugia malayi, whose adults live in the lymphatic system, and Loa loa, which infects subcutaneous tissues. In addition, some filarioids have an animal origin, either from domestic mammals, such as for Dirofilaria spp., or from wild mammals, including Onchocerca, Molinema, and Loaina spp (1,2,5).

Nematode identification at the species level might be supported by anamnestic information, such as host and geographic location. However, for a reliable, definitive, species identification, proper morphologic or molecular diagnosis is needed. Clinical reports may provide a useful database for better understanding of the zoonotic potential of little-known filarioids infecting wild animals. We report a case of human intraocular filariasis caused by a Pelecitus sp., briefly describe the main morphologic features for nematode identification, and suggest the origin of this zoonotic infection.

On August 2007, a 29-year-old man from Tucuruí in northern Brazil, who worked in power grid maintenance in a forested area, came to his ophthalmologist with an intraocular larva in the left eye. There was no familial history of ophthalmologic disorders, and ophthalmologic examinations showed that the patient had visual acuity and corrected vision of 20/25 in both eyes. Biomicroscopy showed a transparent cornea in the right eye without lesions or edema, an anterior cavity without an inflammatory reaction, and an anterior subcapsular cataract of +/4+. The cornea in the left eye was transparent and did not have lesions or edema, and the anterior chamber did not show an inflammatory reaction. No funduscopic alterations were found in either eye by direct and indirect ophthalmoscopic examination. 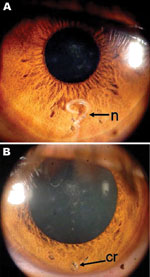 Figure 1. Eye of the patient, a 29-year-old man from Brazil. A) Nematode (n) between muscle fibers of the iris. B) Iris after surgery, showing a mild residual scar (cr) in the region...

An ≈4-mm worm with undulating movements was observed between the muscular fibers of the iris (Figure 1, panel A). The patient underwent surgery 1 day after the consultation, and he consented to the publication of this clinical case. After peribulbar anesthesia, a 2-mm corneal incision was made at the 11 o’clock position. The nematode was extracted by aspiration (Appendix Video) and placed in saline solution. No surgical complications occurred (Figure 1, panel B), and the patient did not have ocular symptoms during the 6 months after surgery.

Figure 2. Parasitic nematode isolated from the eye of the patient, a 29-year-old man from Brazil. A) Nematode that was removed from the iris, showing anterior (ae) and posterior (pe) extremities. Scale bar...

The worm was fixed in 2% acetic acid, 3% formaldehyde, and 95% ethanol; mounted in glycerine jelly; and later transferred into lactophenol. The specimen was preserved in absolute alcohol at the National Museum of Natural History (Paris, France) (accession no. 138 YU). This male nematode (length 4.5 mm, width 300 µm at mid-body) had a coiled and twisted body that tapered at both extremities (Figure 2, panel A). The cuticle (thickness 6 µm) showed 2 rounded, lateral, cuticular alae (thickness 20 μm) along the body and postdeirids 530 µm from the posterior extremity (Figure 2, panel B). The head was bluntly rounded and contained 4 externolabial papillae, 4 cephalic papillae, 2 amphids, and a buccal cavity (length 5 µm, width 4.5 µm) with a tiny cuticular ring. The nerve ring was 165 µm from the anterior end. The esophagus was 765 µm long, increased slightly in diameter in the posterior half, and did not have a distinct glandular part. The large caudal alae had 2 granular inclusions on each lateral side. The tail was 48 µm long. Five pairs of caudal papillae (2 pedunculated, precloacal, lateral; 1 small subventral closely posterior to the cloacal opening; and 2 pedunculated lateral pairs on posterior half of the tail) were observed, and the 2 phasmids were subterminal. The 2 spicules (length 66 µm and 82 µm) (Figure 2, panels C, D) were dissimilar. The larger left spicule had a typical beveled extremity.

Many morphologic characteristics of the filarial worm resembled those of Pelecitus spp (6). (coiled and twisted body that was attenuated at both extremities; lateral alae from the cervical region to distal tip of body; postdierids within alae in the posterior half of body; and a delicate, preesophageal, cuticular ring). Pelecitus spp. include mainly parasites of birds and a few mammals, some of which have been identified as Loaina spp (6,7).

The specimen from the patient was compared with the 16 known species of Pelecitus described (6,8,9), but the specimen did not match any of them. The worm differed from the only 2 species found in lagomorphs (P. scapiceps and P. meridionaleporinus) (9) in North America and Mexico, which had a beveled extremity on the right spicule (8,9) instead of the left spicule.

A small male filaria was recovered from the anterior chamber of a human eye in Colombia (5). This filaria was originally assigned to the genus Loaina but was later identified as a species of Pelecitus (6). Like the nematode specimen we describe, it was morphologically similar to some species that infect birds.

We assigned the worm found in the anterior chamber of the eye of the patient to the genus Pelecitus (6). The species of Pelecitus that infected the eyes of 2 humans (reported here and in Colombia) (5) remains unidentified. These cases were found in the tropical Amazon region (Pará, Brazil) and the Department of Antioquia (northwestern Colombia). The male specimen of Pelecitus sp. described here and the species that infected a human in Colombia are similar but distinct. However, in both cases, a mammalian origin of these zoonotic agents seems unlikely because of differences identified by comparing these worms with parasitic species infecting lagomorphs (8,9). Both cases of human infection with Pelecitus spp. more likely have an avian origin. Vectors of Pelecitus spp. are mosquitoes, chewing lice, and tabanids, as shown with the 3 cycles elucidated (10–12).

Although infection of birds in South America by Pelecitus spp. has been reported (13,14), information on this taxon is scant. Many nematode species have not been identified because of lack of basic information on filarial fauna of animals. This dearth of information is particularly true for regions, such as the Amazon rain forest in Brazil, where wide biodiversity and many unidentified animal and plant species are found (15). Consequently, species identification of filarioid nematodes that infect human eyes is difficult if not impossible. However, our identification of this filarid should help clarify the zoonotic role of filarioid infections in humans in tropical regions and increase awareness of physicians and ophthalmologists of the variety of nematodes that may be found in the human eye.

We thank R.P. Lia for assistance with the laboratory work.