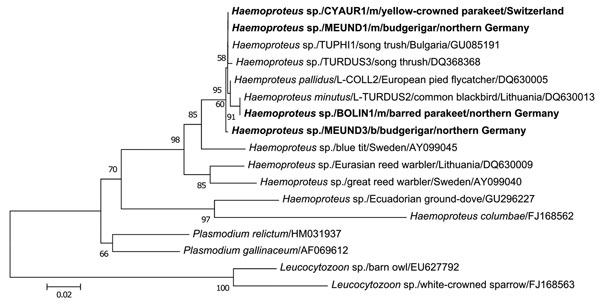 Figure. Phylogenetic relationships based on alignment of 479 bp of the cytochrome b gene of Haemoproteus spp. isolated from megalomeronts (m) of infected muscles and blood (b) of parrots with related hematozoan parasites in GenBank and the database MalAvi (http://mbio-serv4.mbioekol.lu.se/avianmalaria; 10). Nucleotide distance values of the maximum likelihood phylogenetic tree were calculated under the HKY substitution model. New sequences of Haemoproteus spp. from parrots of this study are shown in boldface. Two distinct species of the genus Leucocytozoon served as outgroup of the phylogenetic tree. The branch lengths are proportional to the degree of inferred evolutionary change as shown by the scale bar, and the numbers indicate bootstrap values (1,000 replicates). While the cytochrome b sequences CYAUR1, MEUND1, and BOLIN1, respectively, found matching sequences, MEUND3 showed closest sequence similarities with Haemoproteus spp. of the lineage COLL2, which depict a wider host breadth among songbirds (http://mbio-serv4.mbioekol.lu.se/avianmalaria). The isolates of Haemoproteus spp. from psittacine birds were deposited into GenBank under accession nos. HQ398207–HQ398212.