To the Editor: Anaplasma phagocytophilum, an emerging human pathogen of public health importance, is transmitted to humans most commonly by tick bites (1). The agent has been detected in various species of Ixodes ticks around the world (2) and in Dermacentor silvarum ticks in northeastern People’s Republic of China (3), where 3 A. phagocytophilum strains were isolated from wild and domestic animals (4). In the Asiatic region of Russia adjacent to China, A. phagocytophilum was identified in Ixodes persulcatus ticks, and A. bovis in Haemaphysalis concinna ticks (5). Human granulocytic anaplasmosis was reported in the southern area of the Russian Far East that borders China (6). The objectives of this study were to investigate the prevalence of A. phagocytophilum in ticks collected from the China–Russia border and to characterize the agent by molecular biology techniques.

During May–June 2009, host-seeking ticks were collected by flagging vegetation of grassland or woodland along the China–Russia border. Attached ticks were collected from sheep and goats in Hunchun, and from dogs in Suifenhe (Table). All ticks were identified by morphologic features to the species level and the developmental stage by 2 entomologists (Y. Sun and R.-M. Xu). DNA was extracted from tick samples by using Tissue DNA Extract kit (Tiangen Biotechnique Inc., Beijing, China), following the instructions of the manufacturer. Nested PCR was performed to amplify partial citrate synthase gene (gltA) of A. phagocytophilum as previously described (7). To avoid possible contamination, DNA extraction, the reagent setup, amplification, and agarose gel electrophoresis were performed in separate rooms, and negative control samples (distilled water) were included in each amplification. 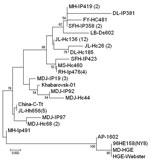 Figure A1. Phylogenetic tree of Anaplasma phagocytophilum based on 348-bp the citrate synthase gene. The tree was calculated by neighbor-joining method using MEGA 3.0 software (8). Values of the bootstrap support...

PCR products were purified by TIANgel Mini Purification Kit (Tiangen Biotechnique Inc.) and sequenced. The sequences obtained were compared with previously published sequences deposited in GenBank by using BLAST (http://blast.ncbi.nim.nih.gov/Blast.cgi). The sequences of partial gltA from positive samples had 97.1%–100.0% identity in nucleotide sequences and 95.9%–100.0% identity in deduced amino acid sequences, 97.0%–99.4% and 96.5%–99.1% identity to Khabarovsk-01 strain from far eastern Russia (GenBank accession no. AY339602), and 96.1%–97.4% and 93.8%–98.3% identity to other corresponding sequences deposited in GenBank. Eighteen representative variant sequences obtained in this study were included in phylogenetic analysis based on 348-bp nucleotides of gltA by using neighbor-joining methods in MEGA 3.0 software (8), which found that the A. phagocytophilum identified in this study can be placed in a separate clade, together with Russian Khabarovsk-01 strain, which is distinct from previously reported strains from the United States and Europe (Figure A1).

A. phagocytophilum infection has been reported in I. persulcatus and engorged D. silvarum ticks in northeastern China (3). In this study, we also found Haemaphysalis spp. ticks, including H. longicornis and H. concinna ticks, to be infected by the agent. This finding indicates that various tick species may be involved in the maintenance and transmission of A. phagocytophilum. Both H. longicornis and H. concinna ticks usually have 3 hosts in their life cycle and can infest a variety of wild and domestic animals such as rodents, deer, scaly anteaters, sheep, goats, and dogs. Haemaphysalis ticks are distributed in a broad range of China and sometimes feed on humans. Their competency as a vector for A. phagocytophilum and the importance of this agent in public health as well as in veterinary medicine has yet to be investigated, particularly in the areas where they are predominant (9). The gltA sequence analyses indicated that the agents detected in this study were similar to the strains isolated from rodents and sheep in northeastern China (4) and to A. phagocytophilum strains from the Russian Far East adjacent to our survey sites. However, the strains from China are genetically distant from A. phagocytophilum strains in the United States and Europe. The genetic diversity of A. phagocytophilum in various geographic locations deserves further study.

We are grateful to Fu Weiming, Li Ming, Wen Zhanqing, and Ding Dawei for assistance in tick collection.