Several reports have documented the presence of SAFV in fecal samples and respiratory secretions (5–10). However, it is not clear whether SAFV is associated with any disease, including gastroenteritis in humans, and epidemiologic data for SAFV are limited. We report an epidemiologic survey of SAFV in children hospitalized with diarrhea in Chiang Mai, Thailand.

A total of 150 fecal specimens were obtained from children hospitalized with acute gastroenteritis in Chiang Mai during January–December 2007. Patient ages ranged from >1 to 5 years. SAFV in fecal specimens was detected by using a nested PCR and primers specific for the virus 5′ untranslated region (7). A negative control was also included to monitor any contamination that might have occurred during the PCR.

All SAFV-positive specimens were further amplified for the VP1 gene to determine their phylogenetic lineages and genetic relationships with other SAFV reference strains. When we used 3 sets of primers used in other studies (6,9,10) for amplification of the VP1 gene, this gene was amplified only by the primer set reported by Itagaki et al. (10). 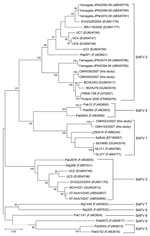 Figure. Phylogenetic analysis of the partial nucleotide sequence (369 nt) encoding the viral protein 1 gene of Saffold virus (SAFV) isolated in this study and other reference strains. The tree was generated...

Phylogenetic analysis of the VP1 region demonstrated that 2 SAFV lineages (SAFV1 and SAFV2) were circulating in Chiang Mai, Thailand. Further extensive epidemiologic surveillance of SAFV in other areas may provide a better understanding of the distribution, heterogeneity, and association of SAFV with enteric diseases in humans.

This study was supported by the Endowment Fund for Medical Research, Faculty of Medicine, Chiang Mai University, Thailand, and in part by Grants-in-Aid from the Ministry of Education and Sciences and the Ministry of Health, Labor and Welfare, Japan.