Multiple studies have indicated that bats might serve as natural reservoirs to a variety of pathogens, including rabies virus and related lyssaviruses, Nipah and Hendra viruses, Marburg virus, and others (1,2). Bats’ high mobility, broad distribution, social behavior (communal roosting, fission–fusion social structure), and longevity make them ideal reservoir hosts and sources of infection for various etiologic agents. In addition to viruses, bacteria and ectoparasites have been detected in bats (3–5) and can potentially cause human infection (6). 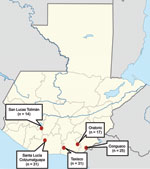 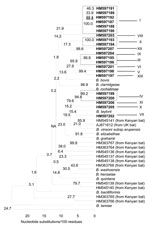 Figure 2. Phylogenetic relationships of the Bartonella spp. genotypes based on partial sequences of the citrate synthase gene detected in bats from Guatemala, Kenya, United Kingdom, and some reference Bartonella spp. The phylogenetic...

Identity of 41 Bartonella isolates was confirmed by PCR amplification of a specific region in the citrate synthase gene by using primers BhCS781.p (5′-GGGGACCAGCTCATGGTGG-3′) and BhCS1137.n (5′-AATGCAAAAAGAACAGTAAACA-3′). Subsequent sequencing analyses of the 41 isolates revealed 21 genetic variants (Table 2) that clustered into 13 phylogroups (I–XIII) with 6.6%–24.7% divergence. The phylogroups were also distant from any previously described Bartonella species and genotypes identified in bats from the United Kingdom and Kenya (Figure 2). Each phylogroup contained 1–6 variants; similarities within phylogroups were 96.2%–99.7% (Table 2).

Further characterization is necessary to verify whether the Bartonella strains representing a variety of distinct phylogroups represent novel Bartonella species. Unlike the discovery in bats in Kenya (12), host specificity of Bartonella spp. was not found in bats in Guatemala. Such lack of specificity may be partly associated with the arthropod vectors that parasitize bats, although we were unable to attempt isolation of agents from the bat ectoparasites. Future studies of bat ectoparasites would enable testing of hypotheses about whether any arthropods may be vectors in the Bartonella spp. transmission cycle and whether ectoparasite specificity contributes to the lack of host specificity observed in this study.

The long life spans of bats (average 10–20 years) may have made them major reservoirs that contribute to the maintenance and transmission of Bartonella spp. to other animals and humans. The bite of the common vampire bat has been long recognized to transmit rabies virus to humans throughout Latin America (2). These bats typically feed on the blood of mammals, including domestic animals and humans (15). Predation of vampire bats on humans is a major problem in Latin America (2). If Bartonella spp. can be transmitted to humans through the bite of bats, the need for further studies with vampire bats is imperative. Bartonella spp.–specific DNA has been detected in ectoparasites collected from bats (3–5). Presumably, if Bartonella spp. are transmitted through a bat ectoparasite vector, some, if not all, bat-associated Bartonella spp. could be transmitted to humans because bats are frequent hosts to a wide variety of ectoparasites, including bat flies, fleas, soft ticks, and mites. However, transmission potential might vary with the degree of synanthropic roosting or foraging behavior within the bat community.

Dr Bai is an associate service fellow in the Bartonella Laboratory, Bacterial Diseases Branch, Division of Vector-Borne Diseases, Centers for Disease Control and Prevention. Her research interests include microbiology, epidemiology, and ecology of zoonotic infectious diseases.

Page created: October 05, 2011
Page updated: October 05, 2011
Page reviewed: October 05, 2011
The conclusions, findings, and opinions expressed by authors contributing to this journal do not necessarily reflect the official position of the U.S. Department of Health and Human Services, the Public Health Service, the Centers for Disease Control and Prevention, or the authors' affiliated institutions. Use of trade names is for identification only and does not imply endorsement by any of the groups named above.