West Nile virus (WNV), a mosquito-borne flavivirus, may cause outbreaks of febrile disease and encephalitis in humans and horses. Although <1% of human patients experience severe disease (1), up to 90% of symptomatic cases in horses result in neurologic disease with case-fatality rates of 30%–40% (2). In sheep, WNV infection may result in abortion, stillbirth, and neonatal death (3). In humans, transmission by transplacental route and breastfeeding has been described. Congenital WNV infection has been accompanied by bilateral chorioretinitis and severe malformation of the fetal central nervous system (4). We report a case of WNV with fatal neurologic disease and abortion in a horse.

Five genetic lineages of WNV exist, the major 2 being lineages 1 and 2 (5,6). Lineage 1 is distributed widely in North and South America, Europe, parts of Asia, North Africa, and Australia. Lineage 2 strains have been identified in humans and horses with febrile and neurologic disease in southern Africa and Madagascar (7) and recently emerged in central Europe causing encephalitis in birds, humans, and horses (7,8). WNV has become recognized as an important horse pathogen in South Africa with all cases positive by nucleic acid detection or virus isolation belonging to lineage 2 (6,7).

Bird deaths due to WNV are rare in South Africa, probably because of the long-term endemic nature of the virus, which limits their use in sentinel surveillance (9). A positive correlation exists between occurrence of symptomatic equine and human cases, which suggests equine outbreaks might predict disease risk for humans (3).

Horses are economically important in South Africa, and diagnoses for animals with severe or fatal disease are frequently requested because of the presence of African horse sickness virus in the country, which is a notifiable disease (http://www.nda.agric.za/vetweb). As part of a WNV surveillance program, in an attempt to determine the contribution of WNV to neurologic infections in animals we invited veterinarians throughout the country to report cases of neurologic disease in horses for free diagnosis. Findings of the first year of this study were published in 2009 (10). WNV was identified for up to 21% of undiagnosed neurologic cases in horses. All cases detected by real-time reverse transcription PCR (RT-PCR) belonged to lineage 2, and 70% of cases were fatal or resulted in the horse being euthanized (10).

On May 24, 2010, a 7.5-month pregnant, 8-year-old thoroughbred mare was found recumbent on a farm outside Ceres in the Western Cape. Temperature was within normal limits, mucous membranes indicated mild toxicity, and tongue tone was normal with mild fasciculations. She was treated with intravenous fluids, dimethyl sulfoxide, and cortisone. When rolled over, she got up but had severe hindquarter incoordination and went down again after 1 minute. She was treated with penicillin twice a day, phenylbutazone, and vitamin B1 over the next 3 days. She rose a few times but went down again and was not able to get up on days 4 or 5. She aborted on day 6 and died on day 7. The brain from the fetus was sampled after abortion, and the brain from the mare was examined postmortem; samples were submitted to the WNV surveillance project. Half of the mare's brain was sent in formalin to the University of Pretoria, Onderstepoort, Faculty of Veterinary Sciences for histopathologic examination. 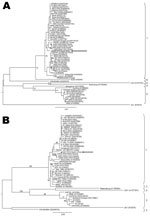 Figure 2. Maximum-likelihood comparison of a partial section of the E-protein gene (A) and NS5 gene (B) of West Nile virus (WNV) lineage 2 strains isolated in South Africa (SA) in 2010 from...

Viral RNA was extracted from 30-mg brain sections with the QIAGEN RNeasy Plus Mini Kit (QIAGEN, Valencia, CA, USA). WNV nonstructural protein 5–specific nested real-time RT-PCR that distinguishes lineages 1 and 2 by hybridization probe-melting curve analysis (11) detected WNV lineage 1 in the brains of the mare and foal (Figure 1) and confirmed by sequencing (results not shown, genome positions 9091–9191). A larger region of the NS5 gene (788 bp) of the mare could be amplified by a nested RT-PCR (12) as well as the E-gene (7). Maximum-likelihood analysis clustered these sequences with lineage 1 strains from North Africa and Europe (Figure 2). Strain PAH001 from Tunisia isolated in 1997 from a person who died of neurologic disease (13) was most closely related (p-distance 2.2%; MEGA4, www.megasoftware.net) followed by strains from Russia (p-distance 2.7%–2.9%). Lineage 2 WNV strains were 17.8%–19.4% different from this strain, SAE75/10. E-protein analysis also grouped SAE75/10 with isolates from Russia (Ast02–2-692, Ast02–2-25) and Tunisia (PAH001) with p-distances of 2.3% and 2.7%, respectively. Lineage 2 WNV strains differed by 23.6%–23.9%.

Continued surveillance over the past 3 years identified lineage 2 strains as the causative agent in all other acute WNV cases positive by RT-PCR and will be reported in more detail elsewhere. Routine use of real-time nested RT-PCR that distinguish lineage 1 and 2 by hybridization probe analysis (12) resulted in rapid detection of a lineage 1 strain as an emerging pathogen in the country. This technique is especially useful in surveillance studies where routine virus isolation is not attempted due to low viremia and suboptimum specimens from horses such as this.

This strain appears to have been associated with abortion of the fetus and death of the mare. To our knowledge, the only published report identified of natural WNV infection of pregnant mares was of 8 lineage 1 WNV–infected horses with neurologic signs from New York and New Jersey, USA, of which 3 were pregnant but none aborted (14). As in the case we report, 7/8 horses received dimethyl sulfoxide, flunixin meglumine, and phenylbutazone intravenously, and 2 dexamethasone intravenously for 1–3 days. Corticosteroids are regarded as ineffective in the induction of abortion in mares unless large repeated doses are used (15).

This report of a lineage 1 WNV strain emerging in South Africa confirms the sensitivity of horses as sentinels for detecting new strains and WNV activity in WNV-endemic countries. Continued surveillance will determine if lineage 1 is sustained in this region. In addition, transplacental transmission of WNV in the horse suggests a risk for abortion in pregnant mares with severe neurologic WNV disease.

Prof Venter is a molecular virologist and head of the Respiratory and Zoonosis Unit at the Department Medical Virology, University of Pretoria, and head of the Respiratory Virus Unit at the National Institute for Communicable Diseases/National Health Laboratory Services, Sandringham, South Africa. Her primary research interests are the pathogenicity of West Nile virus and other arboviruses as well as viral causes of pneumonia.

We thank Dewald Zaayman and Juliet Mentoor for technical support.

This study was funded by the National Research Foundation of South Africa.