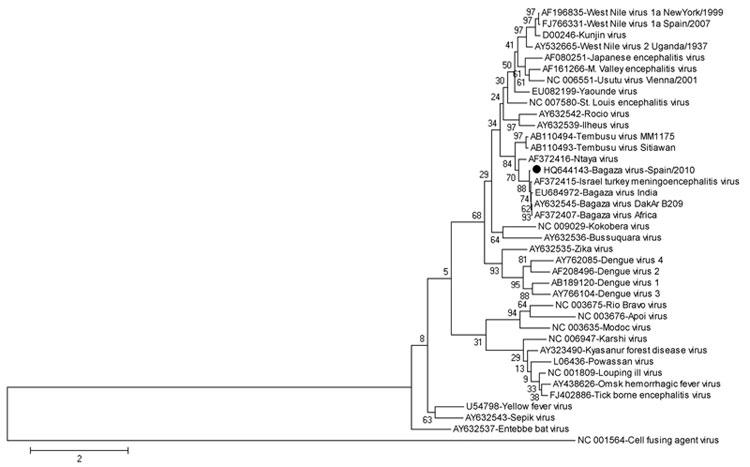 Figure 2. Phylogenetic relationships between partial envelope protein–coding gene sequence for Bagaza virus identified in Cádiz, Spain, 2010 (solid circle) and 38 equivalent flavivirus nucleotide sequences, including those for 3 Bagaza virus isolates, 1 Israel turkey meningoencephalitis virus, 1 Ntaya virus, and 2 Tembusu viruses from GenBank. The phylogenetic tree was inferred by using the maximum-likelihood method. Percentage of 500 successful bootstrap replicates is indicated at the nodes. The optimal Tamura-Nei with Γ distribution model was selected to compute evolutionary distances. A discrete Γ distribution was used to model evolutionary rate differences among sites (5 categories, G parameter = 1.8944). The tree is drawn to scale, and branch lengths are indicated as number of nucleotide substitutions per site. There were 941 positions in the final dataset. Phylogenetic analyses were conducted by using MEGA5 (www.megasoftware.net). GenBank accession numbers are indicated beside each isolate/strain name.