On November 4, 2010, the Republic of the Congo declared a poliomyelitis outbreak. A cross-sectional survey in Pointe-Noire showed poor sanitary conditions and low vaccination coverage (55.5%), particularly among young adults. Supplementary vaccination should focus on older age groups in countries with evidence of immunity gaps.

On November 4, 2010, the Ministry of Health of the Republic of the Congo officially declared a poliomyelitis outbreak centered in Pointe-Noire following the laboratory identification of poliovirus type 1 in a patient with acute flaccid paralysis (AFP) (1,2). A provisional total of 554 AFP case-patients that included a high proportion (68%) of male patients was identified nationally, with paralysis onset from September 20, 2010, through February 27, 2011 (3). During this same period, 451 cases (81.4%), which included 184 deaths, were reported in Pointe-Noire. Most cases were found in the young adult population (57.4% in patients 15–24 years of age), which had a higher case-fatality ratio (CFR) of 40.8% compared with the general population of the country (3).

In most developing countries, prevention and control of poliomyelitis relies on oral polio vaccine (OPV). Routine vaccination focuses on infants <11 months of age with trivalent OPV, and supplementary immunization activities (SIAs) provide additional opportunities for vaccination for children <5 years of age (4,5). In response to the epidemic, the Ministry of Health, in collaboration with the World Health Organization, launched 4 rounds of national SIAs that used monovalent type 1 and bivalent types 1 and 3 OPV during November 12–16, 2010, December 3–7, 2010, January 11–15, 2011, and February 22–26, 2011 (3). To assess risk factors for infection and estimate vaccination coverage, Epicentre and Médecins Sans Frontières implemented a cross-sectional survey in 1 affected neighborhood of Pointe-Noire. 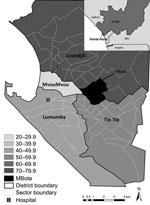 This survey was a single-community rapid assessment of epidemiologic conditions potentially contributing to the outbreak, including vaccination coverage. The survey was done in Mbota, a neighborhood composed of 4 sectors, comprising 9.5% of the city population. This neighborhood was selected from Loandjili district (Figure 1) on the basis of local expert consultation to ensure socioeconomic diversity and representativeness. To estimate vaccination coverage of 80% among children with 5% precision at a 95% confidence level, we aimed to sample at least 246 households. We assumed each household had on average 1 child <5 years of age. We also assumed 5 persons per household on average, which corresponds to ≈1,230 persons overall. Households were selected in each sector of the neighborhood. From a starting point on the border of the sector, interviews focused on every fifth household, following a predefined direction toward the center of the sector, subsequently covering the entire neighborhood. Data were collected through face-to-face interviews December 9–10, 2010, by using a structured questionnaire. The questions included household demographics, water supply, and sanitary conditions. In addition, information for each person in the household was collected about vaccination history (routine and SIAs), any previous illness, and access to health care during the past 3 months. Vaccination coverage was estimated on the basis of reported personal history or documentary evidence of vaccination: a fingernail marked with ink indicating vaccination during SIAs or a vaccination card indicating routine vaccination.

The cross-sectional survey confirmed administrative estimates of low routine vaccination decreasing with age. Specifically, in the surveyed young adult population (15–29 years of age) it varied between a reported 46.2% and 52.6%. According to administrative data, the reported vaccination coverage varies between 41.7% and 79% in young adults between 15 and 24 years of age. Civil conflicts spanning the 1990s have potentially undermined vaccination efforts, especially affecting those currently 10–20 years of age. A further method of protection for a person is past exposure to wildtype strains. To our knowledge, no polio transmission had been reported in Pointe-Noire since the last outbreak in the city in 1969 (6). Low vaccination coverage and no previous exposure to wild virus likely led to an accumulation of susceptible persons. Once introduced, the disease spread quickly through this highly susceptible, undervaccinated, and underexposed young adult population, with disease spread facilitated by frequent flooding and poor to medium household sanitation conditions, i.e., crowding sleeping areas, shared latrines between households, and common sources for water consumption.

Poliovirus infections lead to clinical disease more frequently in older age groups (7), which partially explains the observed shift of AFP cases toward young adult populations. Moreover, children were better protected with higher vaccination coverage. Death is more frequent when infection occurs in older age groups (8,9), which explains part of the high observed CFR. Clinical manifestations of poliovirus infections are more common in boys and men than in girls and women (10), as observed, and even though males and females share similar vaccination coverage, women in the young adult age groups may have additionally benefitted from exposure to excreted OPV while caring for the young (11).

As seen in the Republic of the Congo, or previously in Namibia (12), Cape-Verde (13), any country with no recent wild-type polio transmission and a similarly low level of vaccination coverage may face similar outbreaks characterized by a large proportion of cases in older age groups and a high CFR (14). Avoiding outbreaks will rely on ensuring vaccination of the at-risk population. Routine vaccination activities should be reinforced by SIAs punctually focusing on older age groups (especially among persons 15–35 years of age) when evidence of immunity gaps are documented by serologic surveys or low historical vaccination coverage data. Lessons from the epidemic should benefit health authorities in better prevention and response to further outbreaks on the road to eradication.

Dr Le Menach is an epidemiologist specialized in infectious diseases modeling, surveillance, prevention, and control. He works at London Regional Epidemiology Unit of the Health Protection Agency, as part of the European program for intervention epidemiology (EPIET).

We thank the Ministry of Health for support and collaboration, the hospital directors and laboratory director in Pointe-Noire, and colleagues from World Health Organization and the Centers for Disease Control and Prevention for the harmonization of the database and stimulating technical discussions.

Page created: August 16, 2011
Page updated: August 16, 2011
Page reviewed: August 16, 2011
The conclusions, findings, and opinions expressed by authors contributing to this journal do not necessarily reflect the official position of the U.S. Department of Health and Human Services, the Public Health Service, the Centers for Disease Control and Prevention, or the authors' affiliated institutions. Use of trade names is for identification only and does not imply endorsement by any of the groups named above.