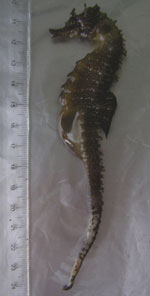 To the Editor: Seahorses (Hippocampus guttulatus and H. hippocampus) with signs of tail rot disease (lethargy, lack of appetite, white spots on the skin, and necrotic tail lesions) were collected from aquaria at the Institute of Marine Research, Spain, during March 2007 through May 2009 (Figure A1). Microscopic examination of cutaneous lesions after Ziehl-Neelsen staining disclosed acid-fast bacilli. Microbiologic analysis showed unidentified Mycobacterium strains. Subsequently, we used PCR amplification of repetitive bacterial DNA elements to group the strains (1). The results showed an identical PCR pattern for the strains; thus, we selected strain BFLP-6T for analysis. On the basis of phenotypic and genotypic data, we consider the unknown acid-fast bacillus to represent a novel species of the genus Mycobacterium, for which the name M. hippocampi sp. nov. is proposed.

Extraction and amplification of genomic DNA for 16S rRNA sequence analysis were conducted as described (2), and the RNA polymerase B (rpoB) gene was amplified and sequenced as described by Adékambi et al. (3). Sequences obtained were compared against the sequences available in the GenBank, EMBL, and DDBJ databases obtained from the National Center for Biotechnology Information by using the BLAST program (4). Phylogenetic analysis were performed by using MEGA version 4.0 (5) after multiple alignments of data by ClustalX (6). Distances (distance options according to the Kimura 2-parameter model) and clustering with the neighbor-joining method were determined by using bootstrap values for 1,000 replications.

The 16S rRNA sequence of strain BFLP-6T was a continuous stretch of 1,473 bp (GenBank accession no. FN430736). Sequence similarity calculations after a neighbor-joining analysis indicated that the closest relatives of strain BFLP-6T were M. flavescens (98.26%), M. goodii (98.01%), M. duvalii (97.94%), M. smegmatis (97.92%), and M. novocastrense (97.86%) (Figure). Similar results were obtained for strain BFLP-6T when the maximum-parsimony algorithm was used. The rpoB gene has also been proposed as a useful marker for inferring bacterial phylogeny (7,8). A pair-wise analysis of the rpoB sequence of strain BFLP-6T (GenBank accession no. FR775976) showed low levels of similarity (<89.8%) with other species of the genus Mycobacterium. The G + C content of DNA, as measured by the thermal denaturation method, was 66.7 mol%.

In addition, strain BFLP-6T showed resistance to isoniazid, thiophene-2-carboxylic hydrazide, hydroxylamine, thiacetazone, and picrate. However, the strain exhibited susceptibility to ciprofloxacin, clarithromycin, and rifampin. The type strain BFLP-6T has been deposited in the German Collection of Microorganisms and Cell Cultures, under reference DSM 45391T; and in the Belgian Coordinated Collections of Microorganisms under reference LMG 25372T.