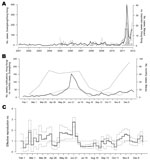 To the Editor: Scarlet fever is a notifiable disease in Hong Kong, Guangdong Province, and Macau in the People’s Republic of China. All 3 areas reported substantial increases in cases during 2011 (Figure, panel A). In Hong Kong, individual data, including age, geographic location, date of notification, and travel history within the incubation period, were collected from all locally notified scarlet fever case-patients. As of December 31, 2011, a total of 1,535 cases (21.7 cases/100,000 population) were reported, which was ≈10× higher than the average number of annual cases reported during the preceding 10 years (1). Of those, 730 cases were laboratory confirmed; 46 cases were imported; and 2 cases, 1 each in a 7-year-old girl and a 5-year-old boy co-infected with chickenpox, resulted in death (2).

Group A Streptococcus (GAS), the bacterium that causes scarlet fever, is mainly transmitted by direct contact with saliva and nasal fluids from infected persons (3). Many children can also carry GAS or be asymptomatically infected (4). A recent study in China showed that GAS is commonly resistant to macrolides and tetracycline but sensitive to penicillin, chloramphenicol, cefradine, and ofloxacin (5). In Hong Kong, GAS emm type 12 dominated among the isolates cultured during 2011 (6). Most of the cases reported were in children <10 years of age (range 1 month–51 years; median 6 years [interquartile range 4–7 years]). The age distribution is similar to that reported during previous years (data not shown).

In the United Kingdom during the mid-19th century, scarlet fever epidemics were found to follow a 5- to 6-year cycle, but this pattern disappeared as incidence decreased (7). Annual scarlet fever notifications in Hong Kong remained low during 2001–2010 (<4 cases/100,000 population) and did not demonstrate any apparent long-term pattern. The recent increase in scarlet fever notifications might be attributable to antigenic drift, increase in virulence of GAS (8), or increased circulation of GAS. However, other than mandatory notification of medically attended case-patients, systematic laboratory testing of GAS isolates was not conducted in Hong Kong, and these possibilities could not be further investigated.

In 2011, scarlet fever notification rates were elevated in all 4 regions of Hong Kong: New Territories East, New Territories West, Kowloon, and Hong Kong Island at 27.2, 21.7, 18.9, and 19.6 cases per 100,000 population, respectively. However, a distinctly higher proportion of imported cases before July 2011 (12 of 14, p value for exact binomial test = 0.01) were notified in New Territories East and New Territories West, where the main border crossings to mainland China are located. This finding suggests a link to the outbreak in Guangdong in these regions during the early phase of the local outbreak.

We estimated the instantaneous reproduction number (Rt), which measures the time-dependent frequency of transmission per single primary case (Technical Appendix) (9). An Rt consistently >1 would indicate sustained local transmission. We estimated Rt on the basis of the daily scarlet fever notification data in different periods, adjusted for imported cases. For 19 cases (1.2% of all cases), we could not determine whether infection was local or imported. We estimated Rt in 2 different ways: either by assuming that all of these cases were local or by assuming that they all were imported, to represent possible extreme values of Rt. Rt fluctuated between 0.6 and 2.0 and was consistently >1 from mid-May through the end of June. Rt fell quickly to <1 beginning in early July after 2 fatal scarlet fever cases were reported on May 29 and June 21, which raised widespread concern in the community (Figure, panel C). Heightened surveillance, publicity, health education to the public (Technical Appendix) were implemented by the Centre for Health Protection in early June and could have contributed to the reduction in transmissibility. The health education measures included guidance on prevention and control measures, such as updates of antimicrobial drug resistance profile of GAS issued to all doctors and strengthening reporting of scarlet fever cases by child care centers and schools for prompt epidemiologic investigations.

In summary, we analyzed the notification data of scarlet fever and investigated spatiotemporal spreading patterns of the disease with certain time lags in Hong Kong, Macau, and Guangdong. The estimated Rt in 2011 indicated the potential for local transmission and persistence. Such a borderless spread indicates a critical need to enhance cross-border communication and timely sharing of epidemic information so that future disease control efforts can be made at multiple geographic levels.

We thank S.K. Chuang and Thomas Tsang of the Centre for Health Protection in Hong Kong for their kind support and assistance in collating the notification data. We thank Peng Wu for technical support.

This project was supported by the Harvard Center for Communicable Disease Dynamics from the National Institute of General Medical Sciences (grant no. U54 GM088558) and the Research Fund for the Control of Infectious Diseases, Food and Health Bureau, Government of the Hong Kong Special Administrative Region (grant no. HKU-11-04-02). H.N. received funding support from JST PRESTO program. B.J.C. received research funding from MedImmune Inc.. D.K.M.I. received research funding from F. Hoffmann-La Roche Ltd.