Bites from Macaca mulatta monkeys, native to Afghanistan, can cause serious infections. To determine risk for US military members in Afghanistan, we reviewed records for September–December 2011. Among 126 animal bites and exposures, 10 were monkey bites. Command emphasis is vital for preventing monkey bites; provider training and bite reporting promote postexposure treatment.

Military members deployed to Afghanistan face many risks; among these are bites from Macaca mulatta monkeys and possible subsequent infections. In August 2011, a 24-year-old US Army soldier died of a rabies infection contracted while in eastern Afghanistan. This tragedy highlights the threat that animal bites pose to deployed military members. 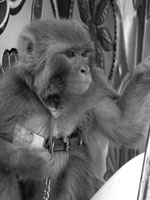 During 2001–2010, a total of 643 animal bites among deployed US military members were reported (1). Dogs were implicated in 50% of these bites, but several other animals pose risk as well. Prominent among these is the nonhuman primate M. mulatta (rhesus macaque), native to and commonly kept as a pet in Afghanistan (2) (Figure). Risks from M. mulatta monkey bites include physical trauma and/or infection with B-virus (Macacine herpesvirus 1), oral bacteria (including Clostridium tetani), and rabies virus. Although not well characterized in Afghanistan, the risk for exposure to M. mulatta monkeys has been described (3) for researchers (4), tourism workers (5), and US pet owners (6). We examined this risk for US military members deployed to eastern Afghanistan. The work presented herein was reviewed and deemed exempt from internal review board oversight by the Joint Combat Casualty Research Team, the human subjects review board responsible for oversight of human subjects research affecting US military members in Afghanistan.

When appropriate initial treatment was not administered, subsequent follow-up was conducted to ensure that patients received required treatment. Appropriate treatment was accomplished by contacting and coordinating with the responsible provider, the patients, and their commanders.

During the study period, we identified 126 cases of animal bites or serious exposures (involving animal neural tissue or saliva affecting the mucosal surfaces or open wounds of the patient). Among these cases, 10 were cases of monkey bites.

Among the 10 military members who had been bitten by monkeys, age range was 22–44 years (Table); most (7) were <30 years of age, and 8 were male. All were junior enlisted or noncommissioned officers; 8 were members of the Army, and 2 were members of the Air Force (Table).

All cases involved different monkeys, 8 of which were kept as pets. Of these 8 pet monkeys, 4 belonged to Afghan National Security Forces (ANSF), 3 belonged to Afghan civilians, and 1 belonged to US military members. For the other 2, no ownership data were available; they could have been wild or pets. One monkey was euthanized and sent to US Army Veterinary Laboratory Europe for testing; brain samples were negative for rabies and B-virus.

Our identification of 126 reported bites or exposures over just 4 months suggests that the 643 animal bites reported for all deployed US military members for the past decade greatly underestimate the true number of animal bites in this population. The number of bites and exposures identified in this study might represent more accurate reporting because of increased attention to animal bites after the US soldier died in August 2011. It is possible that before that time, only more severe bites and exposures were reported but that after that time, more lower-risk exposures might have been reported.

The risk for monkey bites in other populations has been described. The 10 monkey bites reported in this study demonstrate that US and coalition military members in Afghanistan are also at risk for the trauma and the B-virus, bacterial, tetanus, and rabies infections that can result from monkey bites and exposures. The demographics of the population bitten (Army, age <30 years, and male) is representative of the underlying population at risk.

Most monkey-bite patients received appropriate care. This care is laudable, considering the recognized difficulties in treating monkey bites (12). Some patients, however, did not receive appropriate medical treatment initially. Because treatment of monkey bites is not a standard part of US medical education, inadequate treatment could reflect insufficient training and lack of familiarity among US-trained health care providers. It is imperative that before providers are deployed to Afghanistan, they receive proper instruction on the care of animal bites and exposures. Appropriate reporting of any animal bite to military preventive medicine personnel is crucial because it permits oversight of care and timely correction of deficiencies.

Most (7/10) monkeys involved were pets owned by ANSF or Afghan civilians. As the mission in Afghanistan shifts from combat to ANSF mentoring and reconstruction, US and coalition troops will come into increasingly close contact with ANSF and Afghan civilians. Accordingly, the likelihood of deployed US military members being exposed to monkeys in Afghanistan will probably increase. However, although risk for contact with monkeys might increase, an increase in bites is not inevitable. Explicit orders prohibit deployed US military members from adopting local mascots and from interacting with animals or pets owned by ANSF or Afghan civilians. To mitigate the risk for animal bites, it is crucial that commanders enforce these regulations (13).

The risk of being bitten by a monkey could increase as US forces work more closely with ANSF and Afghan civilians. Bites could be prevented by appropriate emphasis from command and enforcement of existing policies prohibiting pet adoption and animal contact. Treatment of patients who are bitten could be improved by further training of military health care providers on appropriate treatment for animal bites, including monkey bites.

Dr Mease was the Division Preventive Medicine Officer for Combined Joint Task Force–1, Afghanistan and is the officer in charge at the Army Health Clinic in Utah. His research interests include vector-borne diseases and dermatologic disorders in military and occupational settings.

We thank David Broussard, Ronald Havard, Jason Lennen, and James Reynolds for their review and critique of this study and report. We thank James Geracci for his review of this report and for his leadership.

The work reported here was performed by L.E.M. and K.A.B. as part of their duties in the US Army, Combined Joint Task Force-1, Afghanistan. They have no financial or nonfinancial competing interests.