To identify Candidatus Neoehrlichia mikurensis infection in northeastern China, we tested blood samples from 622 febrile patients. We identified in 7 infected patients and natural foci for this bacterium. Field surveys showed that 1.6% of ticks and 3.8% of rodents collected from residences of patients were also infected.

Candidatus Neoehrlichia mikurensis was detected in 1999 in Ixodes ricinus ticks in the Netherlands and referred to as an Ehrlichia spp.–like agent (1). It was then classified as a new member of family Anaplasmataceae on the basis of ultrastructure and phylogenetic analysis (2). The agent was detected in ticks and small wild mammals in Europe and Asia (1–6) and has recently been reported to infect humans, especially immunocompromised patients in Europe (7–10). However, no cases of infection have been identified outside Europe. Moreover, the agent has not yet been isolated in pure culture, and its antigens are not available. 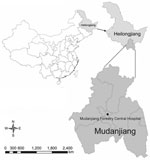 During May 2–July 30, 2010, a total of 622 febrile patients, who had histories of recent tick bites and sought treatment at Mudanjiang Forestry Central Hospital (Figure 1) were screened for the infections of tick-borne agents. When patients were admitted, peripheral blood samples were collected and treated with EDTA. DNA as extracted by using the QIAmp DNA Blood Mini Kit (QIAGEN, Germantown, MD, USA).

For a broad-range assay, a nested PCR specific for the 16S rRNA gene (rrs) was used to detect organisms in the family Anaplasmataceae. For positive samples, 2 heminested PCRs were used to amplify the entire rrs gene. For further confirmation, a nested PCR specific for the 60-kDa heat shock protein gene (groEL) was performed. Detailed cycling conditions for all amplifications are described in the Technical Appendix.

Serum samples were collected from patients during the acute (2–12 days after onset of illness) or convalescent (34–42 days after onset of illness) phases of illness. All samples were negative for IgG against Anaplasma phagocytophilum, Ehrlichia chaffeensis, Borrelia burgdorferi, Rickettsia heilongjiangensis, and tick-borne encephalitis virus when tested by indirect immunofluorescence assay.

All patients were otherwise healthy, and none had a history of underlying immunocompromised conditions. Fever, headache, and malaise were reported for all 7 patients. Other major manifestations included nausea (5/7), vomiting (5/7), myalgia (4/7), and stiff neck (4/7). Less common symptoms were arthralgias (2/7), cough (2/7), diarrhea (1/7), confusion (1/7), and erythema (1/7). Skin erythema (multiple and oval) was seen on the neck of 1 patient.

Laboratory test results showed leukopenia in 1 patient, leukocytosis in 1 patient, thrombocytopenia in 2 patients, and anemia in 2 patients. Serum levels of alanine aminotransferase and aspartate aminotransferase were within reference ranges for all patients. Wright–Giemsa stained peripheral blood smears did not show morulae or other blood parasites.

To identify local natural foci, we performed a field investigation on infections of Candidatus N. mikurensis in ticks and rodents from areas of residences of the patients. During May–July 2010, a total of 516 host-seeking ticks, including 316 I. persulcatus, 187 Haemaphysalis concinna, and 13 Dermacentor silvarum, were collected on vegetation and individually examined. Candidatus N. mikurensis DNA was detected in 6 (1.9%) I. persulcatus and 2 (0.8%) H. concinna ticks, but no DNA was detected in D. silvarum ticks (Table).

A total of 211 rodents of various species were captured by using snap traps. After rodent species was identified, spleen specimens were collected for DNA extraction and PCR. Eight rodents of 3 species, 5 (4.6%) Clethrionomys rufocanus, 2 (5.7%) Rattus norvegicus, and 1 (33.3%) Tamias sibiricus, were positive for Candidatus N. mikurensis (Table). 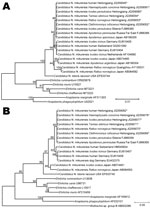 Figure 2. . . . A) Neighbor-joining trees based on the 16S rRNA gene (rrs) and B) the 60-kDa heat shock protein gene (groEL) of Candidatus Neoehrlichia mikurensis, China, generated by using Molecular...

Unlike reported cases in elderly or immunocompromised patients in whom disease developed (7–10), all 7 patients in our study had relatively mild disease. Major clinical manifestations and laboratory findings of the cases in our report, such as leukocytosis, were not similar to those of previously reported cases. It is noteworthy that the patients reported in this study were previously healthy. Thus, their clinical manifestations might be typical of Candidatus N. mikurensis infection in an otherwise healthy population. However, the number of cases in our study was limited, and clinical data were not inclusive. Clinical characteristics of Candidatus N. mikurensis infection should include detailed descriptions of additional cases.

In summary, we identified Candidatus N. mikurensis as an emerging human pathogen in China. Further studies should be conducted to isolate this bacterium and investigate its epidemiologic, genetic, and pathogenic features. To guide diagnostic testing and treatment, physicians should be aware that human Candidatus N. mikurensis infections are in Heilongjiang Province and that PCR can be used as a diagnostic technique for identifying suspected infections.

Mr Li is a medical student in the State Key Laboratory of Pathogen and Biosecurity, Beijing Institute of Microbiology and Epidemiology. His research interests include the microbiology, epidemiology, and ecology of vector-borne diseases.