Cryptosporidium spp., Giardia duodenalis, and Enterocytozoon bieneusi were detected in 45, 35, and 116 of 411 free-range rhesus monkeys, respectively, in a popular public park in the People’s Republic of China. Most genotypes and subtypes detected were anthroponotic, indicating these animals might be reservoirs for human cryptosporidiosis, giardiasis, and microsporidiosis.

Cryptosporidiosis, giardiasis, and microsporidiosis are enteric diseases in humans and are mainly caused by Cryptosporidium spp., Giardia duodenalis, and Enterocytozoon bieneusi, respectively (1–3). These protozoan parasites are also commonly found in animals and are considered zoonotic. However, the role of nonhuman primates in the transmission of the diseases remains unclear because few studies have been conducted on the genetic characteristics of the parasites in these animals. In a recent study in Kenya, 5 (2.0%) and 13 (5.5%) of 235 captive baboons had human-pathogenic C. hominis subtypes and E. bieneusi genotypes, respectively. This finding implies that nonhuman primates might be reservoirs for human cryptosporidiosis and microsporidiosis (4). We determined the genotypes and subtypes of Cryptosporidium spp., G. duodenalis, and E. bieneusi in free-range rhesus monkeys in a popular public park to assess the potential for transmission of these parasites from rhesus monkeys to humans. 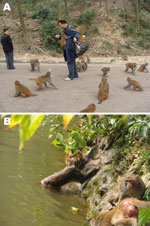 Figure. . . . Potential zoonotic and waterborne pathways of parasites in Qianling Park, Guiyang, China. A) Close contact of rhesus monkeys with humans. B) Potential contamination of recreational water with pathogens...

In November 2010, we collected 411 fecal specimens from rhesus monkeys (Macaca mulatta) in Qianling Park, Guiyang, People’s Republic of China (www.qlpark.cn). The park, a major tourist attraction of the city, is visited by 10,000–70,000 persons each day. It has the highest number (≈700) of domesticated free-range monkeys in China, which originated from a troop of 20 animals in 1985. Visitors are allowed to bring or buy food to feed the animals, watch them from a short distance, or play with them (Figure, panel A).

We detected Cryptosporidium spp., G. duodenalis subtypes, and E. bieneusi genotypes in the fecal specimens and differentiated them by using PCR and sequence analysis of the small subunit rRNA gene (5), triosephosphate isomerase gene (6), and ribosomal internal transcribed spacer (4), respectively. We similarly analyzed water samples after concentrating pathogens by centrifugation at 3,000 × g for 15 min. We subtyped C. hominis and C. parvum by using sequence analysis of the 60-kDa glycoprotein gene (5). We analyzed each specimen at least 2× by using PCR, with the inclusion of positive and negative controls in each run. We used the χ2 test to compare differences in rates of each parasite.

Cryptosporidium spp., G. duodenalis, and E. bieneusi were detected in 11 (47.8%), 12 (52.2%), and 13 (56.5%), respectively, of the 23 water samples collected from the lake where the animals bathed. Fewer C. hominis and G. duodenalis subtypes and E. bieneusi genotypes were detected in water samples than in fecal specimens. Most of the common C. hominis (IaA13R8 and IeA11G3T3) and G. duodenalis (B1 and B5) subtypes and all common E. bieneusi genotypes (Peru11, W15, EbpC, and Type IV) in animals were found in water samples (Table). We deposited unique nucleotide sequences obtained in GenBank under accession nos. JX000562–JX000573.

All C. hominis and C. parvum subtypes found in this study are well-known parasites of humans and have rarely been found in animals. The C. hominis subtype families Ia, Id, Ie, and If had been reported in humans and urban wastewater in China (5,7–9). Although it has not been found in humans in China, the C. parvum IIc subtype family identified in rhesus monkeys in this study is a well-known anthroponotic parasite in developing countries (1).

The origin of Cryptosporidium spp., G. duodenalis, and E. bieneusi parasites in the rhesus monkey population is not clear. Because these parasites are common human pathogens, they could have been introduced by humans. However, rhesus monkeys can be natural hosts of these organisms, as supported by recent identification of some of these organisms in newly captive baboons from rural and forested areas (4). Regardless of the initial origin of the parasites, they can be transmitted efficiently among rhesus monkeys, as supported by the higher occurrence of Cryptosporidium spp., G. duodenalis, and E. bieneusi at places with higher animal density.

Our results indicate that rhesus monkeys in close contact with humans are commonly infected with human-pathogenic C. hominis, C. parvum, and G. duodenalis subtypes and E. bieneusi genotypes. Therefore, they can serve as reservoirs of human cryptosporidiosis, giardiasis, and microsporidiosis. Zoonotic transmission of infection from these monkeys can occur directly by close contact of monkeys and humans (Figure, panel A), or indirectly through contamination of drinking water or recreational water (Figure, panel B). Efforts should be made to educate the public about the potential risk for zoonotic transmission of enteric pathogens from rhesus monkeys and to minimize contamination of drinking and recreational water by parasites of rhesus monkey origin.

Mr Ye is a doctoral candidate at the East China University of Science and Technology. His research interest focuses on in the molecular epidemiology of cryptosporidia, giardia, and microsporidia.

This work was supported in part by the National Natural Science Foundation of China (31110103901, 31229005, 41001316), the National Basic Research Program of China (973 Project) (2011CB200903), Fundamental Research Funds for the Central Universities, and Open Funding Projects of the State Key Laboratory of Veterinary Etiological Biology at the Lanzhou Veterinary Research Institute and State Key Laboratory of Bioreactor Engineering at East China University of Science and Technology.