Legionella pneumophila, a gram-negative rod normally inhabiting aquatic environments, causes severe infections, including pneumonia (legionellosis) that can be acquired in the community or in hospitals. Traditional risk factors for legionellosis include smoking, corticosteroid use, and chronic lung disease (1). Receipt of a tumor necrosis factor–α antagonist (TNF-α antagonists: infliximab, adalimumab, etanercept) generally has not been considered a risk factor for legionellosis.

In the past 2 decades, use of TNF-α antagonists have revolutionized the treatment of rheumatoid arthritis, inflammatory bowel disease, psoriasis, and other inflammatory conditions. After introduction of these agents, a growing body of postmarketing literature has shown an increased risk for disease from Mycobacterium tuberculosis, endemic mycoses, and intracellular bacterial pathogens, including Legionella pneumophila (2). We report a severe case of right upper lobe pneumonia caused by L. pneumophila serotype 1, mimicking M. tuberculosis reactivation, in a patient receiving the TNF-α antagonist adalimumab for rheumatoid arthritis.

In June 2010, a 67-year-old woman sought care at an emergency department in Winnipeg, Manitoba, Canada, with a 7-day history of fevers, rigors, and progressive breathlessness. She reported diarrhea, nausea, and vomiting during the preceding 4 days. A chronic nonproductive cough was unchanged. Her medical history included rheumatoid arthritis, hypothyroidism, hypertension, and dyslipidemia. Her immunosuppressive regimen consisted of azathioprine, 150 mg per day (unchanged over the previous 2 years) and adalimumab, 40 mg per month, initiated 10 weeks earlier. She reported no history of travel or contact with persons who had tuberculosis. She denied hot tub use or other exposures to aerosolized droplets. The result of a tuberculin skin test, performed at initiation of TNF-α inhibitor, was nonreactive.

On examination, the patient appeared acutely ill. Her respiratory rate was 30 breaths per minute. Her peripheral saturation of oxygen was 96% while receiving 5 L/min oxygen by face mask. Blood pressure and heart rate were 90/60 mm Hg and 140 beats per minute, respectively; oral temperature was 38.3°C. Breath sounds were rapid with crackles noted bilaterally to the lung fields and occasional wheezes. Abdominal examination disclosed some tenderness in the right lower quadrant. 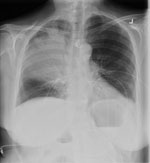 The patient was intubated, placed on mechanical ventilation, and transferred to the intensive care unit. Her immunosuppressive agents were held, and antimicrobial drug treatment was initiated with vancomycin (because of concern about methicillin-resistant Staphylococcus aureus pneumonia), ceftriaxone, and azithromycin. Bronchoscopy demonstrated frank pus in the right upper lobe bronchi, cultures of which ultimately grew 2+ L. pneumophila serotype 1 and 2+ yeast and 1+ Stenotrophomonas maltophilia. Mycobacterial cultures were negative. Initial Legionella direct fluorescent antibody staining from the bronchoalveolar lavage was negative, as were blood cultures. A Legionella spp. urinary antigen test result was positive.

Antimicrobial drugs were switched on day 5 of hospitalization to levofloxacin (500 mg intravenous daily) and rifampin for Legionella spp. and trimethoprim–sulfamethoxisole to treat S. maltophilia. Over 24 hours, her clinical condition improved dramatically, leading to extubation and transfer to the general medicine ward. A computed tomographic scan of the chest, obtained 2 weeks after admission because of worsening hypoxemia, showed areas of necrosis, development of cavitary lesions within the right upper lobe, and a segmental pulmonary embolism. Anticoagulation was initiated. The antimicrobial drugs were continued for 3 weeks, then substituted for azithromycin, for a total duration of 6 weeks, which was considered an adequate duration of treatment given the cavitation. Mobilization and weaning from oxygenation were slow because of marked deconditioning and malnutrition. 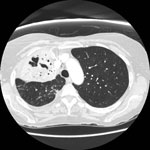 Figure 2. . . Results of repeat computed tomographic scan in a 67-year-old woman with Legionella pneumophila serotype 1 pneumonia 2 months after hospital admission. The scan shows reduction in the amount of...

With the support of physiotherapists and other members of the integrated health care team, the patient eventually recovered and was discharged home 5 weeks after admission. Repeat computed tomographic scan 2 months after her initial illness showed evolution of the pulmonary cavity and reduced consolidation (Figure 2).

Thirty-three cases of legionellosis have been described in patients receiving infliximab, adalimumab, or etanercept for rheumatoid arthritis, inflammatory bowel disease, psoriasis, or other inflammatory conditions (3–5). Similar to the case with other intracellular bacterial pathogens, such as Listeria monocytogenes (2), receipt of a TNF-α antagonist is emerging as a risk factor for pneumonia from Legionella spp. Lung cavitation or necrosis, which occurred in this case, is an uncommon manifestation of legionellosis and has been reported more commonly in immunocompromised hosts (6); we are aware of only 1 other case of lung cavitation caused by Legionella spp. in a patient receiving a TNF-α antagonist (3).

Registry data of all patients on a TNF-α antagonist in France suggested the relative risk for L. pneumophila infection was 16.5–21, compared with the general population (7). Although confounding factors, such as the effect of concomitant immunosuppressive medications or disease, are possible contributors, TNF-α antagonists themselves are likely to contribute substantially to the high risk for legionellosis in these patients. To our knowledge, azathioprine has not been associated with increased risk for Legionella infection.

The cytokine TNF-α appears to play a direct role in the immunologic response to Legionella spp. infection. TNF-α promotes macrophage recruitment and factors in host response to infection with intracellular pathogens (2). Induction of increased levels of TNF-α to macrophage cultures resulted in resistance to subsequent infection with L. pneumophila serotype 1; however, susceptibility was restored with addition of TNF-α antibodies to the culture (9). Furthermore, a mouse knockout model demonstrated 90% mortality and decreased clearance of L. pneumophila–infected, TNF receptor–deficient mice, in comparison with wild-type mice (10). L. pneumophila grew in TNF receptor-1 deficient macrophage culture but not when this receptor was present (10). The exact mechanism by which cytokine TNF-α contributes to protection from infection by Legionella spp. has not yet been elucidated.

Guidelines for preventing Legionella infection in patients receiving a TNF-α antagonist are not available; however, minimizing aerosolized exposure to untreated water sources (such as decorative fountains) is reasonable (1). Current data do not support avoiding the consumption of tap water.

As use of TNF-α inhibitors increase, we urge clinicians to consider this association with legionellosis. Empiric therapy for pneumonia should include an agent with activity against Legionella, such as a fluoroquinolone or macrolide.

Dr Wuerz is a fellow in his final year of clinical infectious disease training at the University of Manitoba. His research interests include the epidemiology and role of infectious diseases in northern Canada.