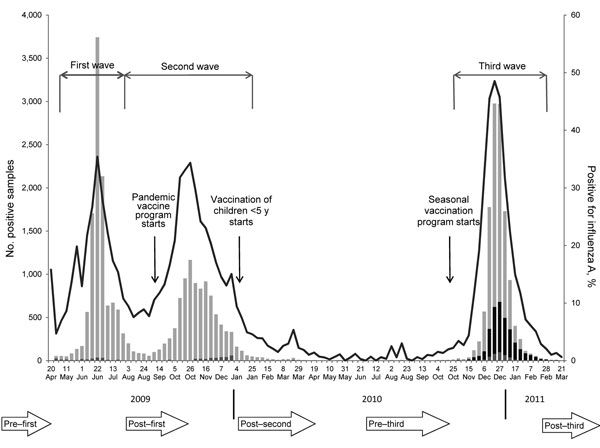 Figure 1. . Number of influenza A(H1N1)pdm09 virus detections (and percentage positive) detected through a network of Health Protection Agency laboratories (the Respiratory DataMart system) from the start of the pandemic in week 17 (week of April 27) 2009 until the end of the 2010–11 winter season. It demonstrates the 3 waves of pandemic influenza activity in summer 2009, autumn 2009, and winter 2010–11 and the key events in relation to the timing of the national influenza vaccination program. The timing of the serum collections are illustrated at the bottom of the figure. Samples were grouped into panels according to their collection. Light gray, A(H1N1)pdm09 virus; medium gray, untyped influenza A virus; black, influenza B virus; line, overall percentage positive. Study periods were defined as follows: pre–first wave, before April 2009; post–first wave, August–October 2009; post–second wave, January–April 2010; pre–third wave, June–October 2010; and post–third wave, February–April 2011.

Page created: October 05, 2012
Page updated: October 05, 2012
Page reviewed: October 05, 2012
The conclusions, findings, and opinions expressed by authors contributing to this journal do not necessarily reflect the official position of the U.S. Department of Health and Human Services, the Public Health Service, the Centers for Disease Control and Prevention, or the authors' affiliated institutions. Use of trade names is for identification only and does not imply endorsement by any of the groups named above.