To the Editor: African swine fever (ASF) is a highly contagious and deadly hemorrhagic disease of domestic pigs caused by African swine fever virus (ASFV), a double-strand DNA virus of the family Asfarviridae and genus Asfivirus (1). Twenty-two ASFV genotypes (I–XXII) have been identified on the basis of nucleotide sequencing of the variable 3′-end of the B646L gene encoding the major capsid protein p72 (2,3). 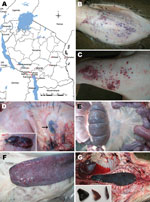 An outbreak of ASF in domestic pigs occurred in November 2010 in the Kyela District of the Mbeya region in southwestern Tanzania, which coincided with another outbreak in a neighboring district of Karonga in northern Malawi (Figure, panel A). ASF continued to spread from Mbeya and ultimately reached the neighboring region of Iringa (Ludewa District) in February 2011 through feeding of pigs with swill from Mbeya. By March 2011, ASF had spread to Chunya, Ileje, Mbarali, Rungwe, and Tukuyu districts within Mbeya. The disease spread within the region because of the lack of zoosanitary measures and illegal movement of animals despite the quarantine in place. An outbreak on 1 farm in the Temeke District of the Dar es Salaam region in eastern Tanzania occurred in March 2011 after a farmer obtained pig stock from Mbeya. No further spread of the disease in Dar es Salaam was observed after early diagnosis, removal of affected pigs, and zoosanitary measures.

In October 2011, the disease spread to the Sumbawanga District of the Rukwa region through feeding of swill and illegal movement of animals. ASF was reported in February 2012 in Ifakara in the Kilombero District in the Morogoro region, and in July 2012 in the Kilosa District within this region. The disease spread into Kilombero District after 1 farmer purchased pigs for stock from the Iringa region. As of July 2012, ASF was reported again in the Mbeya and Iringa regions, from which it had been eliminated. This unique ASF outbreak in Tanzania persistently circulated for more than a year; previous outbreaks have been sporadic and resolved after shorter durations (8–10).

Mortality rates of 100% caused by ASF were recorded in domestic pigs of all ages in all outbreak areas. Affected pigs showed pyrexia and anorexia, dragged their hind legs, and then showed recumbence. In addition, affected animals had severe cutaneous hemorrhages, especially on medial and lateral sides of the pinna, forelimbs above the carpal joint, facial region, scrotum, and mammary glands (Figure, panels B and C). Postmortem lesions included darkening and enlargement of the spleen, severe hemorrhages of mesenteric and gastrohepatic lymph nodes, and hemorrhagic enteritis (Figure, panels D–G).

DNA was extracted from spleens of animals that either died of the disease or were killed at slaughterhouses during 2010–2012. The variable 3′-end of the B646L (p72) gene was amplified by using p72U/p72D primers (2) and subjected to automated dideoxynucleotide cycle sequencing by using Big Dye Terminator Cycle Sequencing Kit Version 3.1 (Applied Biosystems, Foster City, CA, USA) in a 24-capillary DNA sequencer (Genetic Analyzer 3500 xL; Applied Biosystems).