Swine are a source of novel and existing influenza virus A strains that infect humans (10–13). These strains pose a pandemic threat if they become capable of being transmitted efficiently from person to person and if limited protective immunity exists in the human population. Bidirectional zoonotic transmission of influenza virus A strains usually involves close contact between humans and swine. The United States has 3 major swine–human interfaces: commercial swine production, abattoirs, and agricultural fairs. Agricultural fairs are unique because they facilitate prolonged commingling of pigs from numerous sources raised under varied management programs with millions of persons who have widely disparate histories of exposure to various influenza viruses. This situation creates an environment conducive to zoonotic transmission of influenza virus A.

More persons come in contact with live swine at agricultural fairs than in any other setting in the United States, and several human cases of influenza A have been linked to swine exposure occurring at fairs. In 1988, a woman died of infection with a variant influenza virus A (H1N1) that she acquired while attending a Wisconsin fair where numerous pigs showed signs of influenza-like illness (ILI); a follow-up investigation identified more human infections (14). In Ohio, human infections with variant influenza virus A after exposure to pigs with ILI were detected at the 1988 Ohio State Fair, 2 weeks before the Wisconsin case was reported (R.D. Slemons, unpub. data), and more recently at the 2007 Huron County Fair (15).

Because of dynamic human and swine populations at fairs and the number of human influenza A cases associated with swine exposure that occurs at fairs (13–15), we hypothesized that influenza virus A infections in swine occur undetected at agricultural fairs. This study was initiated after the emergence of influenza A(H1N1)pdm09 to actively monitor the antigenic and genomic properties of influenza virus A among pigs at agricultural fairs in Ohio, with a goal of protecting the health of swine and the public.

During each year of this 3-year study, 2009–2011, agricultural fairs in Ohio were strategically recruited to participate on the basis of the size of the county’s commercial swine industry, the number of 4-H/FFA swine exhibitors, the number of pigs previously exhibited, or the geographic proximity to study sites used for influenza virus A surveillance in wild birds. Selection criteria were chosen to provide a diverse representation of Ohio’s exhibition swine and the influenza virus A strains they might harbor. Before visiting the fair, the study team provided the leaders of each participating agricultural fair with an educational fact sheet on swine influenza. 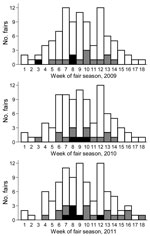 The agricultural fair season in Ohio begins in June and continues into October; the fairs participating in this study occurred throughout the fair season (Figure). Fairs were visited at the end of the swine exhibition period, at which time pigs were visually examined for signs of ILI, and nasal swab specimens were collected from 20 selected pigs representing all areas of the exhibit, without consideration for individual pig health status (healthy or ill). Each nasal swab was placed in an individual vial containing brain–heart infusion broth supplemented with penicillin and streptomycin (16). The samples were frozen at −70°C until testing was initiated. The Institutional Animal Care and Use Committee of The Ohio State University approved protocol no. 2009A0134 for the use of animals in this study.

Samples were thawed and treated with amphotericin B, gentamicin sulfate, and kanamycin sulfate (17); they then underwent centrifugation at 1,200 × g for 30 min at 4°C. The brain–heart infusion broth supernatant was added to 24-well plates containing monolayers of Madin-Darby canine kidney (MDCK; catalog no. 84121903, Sigma-Aldrich Co., St. Louis, MO, USA), adapted to and maintained in serum-free medium (A.S. Bowman et al., unpub. data). MDCK monolayers were examied for cytopathic effect (CPE) daily for 3 days after the supernatant was added, at which time the cell culture supernatant was tested for hemagglutination activity by using 0.5% turkey erythrocytes (18). All hemagglutinating agents in cell culture supernatant and all MDCK cell cultures showing CPE were tested for the presence of influenza virus A by using Flu DETECT (Synbiotics Corporation, Kansas City, MO, USA). Each cell culture supernatant that had positive test results with Flu DETECT was identified as an influenza A viral isolate. Influenza virus A isolates were further characterized by using real-time reverse transcription PCR (rRT-PCR) assays.

The M gene of the influenza A virus isolates was further characterized by differentiating between the North American swine triple-reassortant and the influenza A(H1N1)pdm09 virus M genes by using an rRT-PCR protocol (22) adapted to laboratory conditions. The reactions were carried out by using the QuantiFast Multiplex RT-PCR +R Kit (QIAGEN, Valencia, CA, USA) in a 20-μL reaction mixture containing 10 μL 2× quantitative RT-PCR master mix, 7.5 pmol of forward primer, 2.5 pmol of each reverse primer, 0.125 μmol/L EA minor groove binder probe, 0.0625 μmol/L of each NA minor groove binder probe, 0.4 μL 50× ROX reference dye, 0.2 μL of reverse transcription product, and 5 μL of extracted RNA. The reactions were performed on an Mx3000P QPCR System (Agilent Technologies, Inc., Santa Clara, CA, USA) under these thermocycling conditions: 50°C for 20 min, then 95°C for 5 min, followed by 50 cycles of 97°C for 2 s and 60°C for 40 s. Cycle threshold values were calculated for each sample automatically by the QPCR System’s software by using the background-based method. Samples with cycle threshold <40 were considered positive.

Agricultural fairs are often the face of agriculture to the general public. The International Association of Fairs and Expositions estimates annual attendance at fairs in North America to be 150 million persons (The Association, pers. comm.). Agricultural fairs have been occurring in the United States since 1811 (23) and are special community events with a strong tradition and history of celebrating agricultural heritage and achievement (24). As the agricultural workforce has decreased to <2% of the US population (25), fairs have added educational programs to showcase advancements in food production systems in an effort to maintain attendance (26) and meet societal needs. These much-needed educational efforts often provide an opportunity for attendees to have direct contact with all facets of agriculture, including pork production. Many of these persons would not otherwise have any exposure to swine and the pathogens they harbor, so their close contact with pigs at fairs may play multiple roles in the transmission of influenza A viruses: they may pass human-origin influenza virus A to swine, leading to novel reassortant viruses; they may serve as early sentinels by becoming infected first with a novel swine-origin influenza A virus; or they may disseminate a novel swine-origin influenza virus A in their local communities (27).

The long duration of many agricultural fairs (3–10 days) is distinctly different than other swine concentration points or commingling events (i.e., abattoirs, markets, auctions, or shows), where interactions are limited to hours. In addition to their long duration, agricultural fairs also enable the comingling of pigs from multiple locations and various production systems (backyard to intensive commercial) at 1 site. Exhibition swine are commonly a unique population of noncommercial swine, reared by the use of management practices that differ greatly from standard commercial swine production practices (28). These pigs likely have varying levels of immunity to influenza virus A and may bring a variety of influenza virus A strains with them to the fair, where the viruses can spread to other pigs, possibly reassort, and potentially transmit to humans.

Swine-to-human transmission of influenza virus A has been sporadically reported worldwide (11), but the true incidence of this transmission is unknown. The Centers for Disease Control and Prevention reported that 36 humans were infected with variant influenza virus A in the United States during December 2005–April 2012 (29). Of these cases, 15 occurred after July 2011, and 6 cases, all involving infection with influenza A (H3N2) viruses containing the M gene from the influenza A(H1N1)pdm09 virus (H3N2v), were associated with exposure to swine at agricultural fairs. However, none of the implicated fairs reported signs of ILI in the pigs, and influenza virus A could not be isolated from the pigs that were suspected to be the sources because of delays and lack of the availability of the pigs. Nonetheless, it is possible that subclinical influenza infections in pigs at these swine–human interfaces played a key role in zoonotic infections.

The increased swine–human exposure occurring at agricultural fairs may also facilitate human-origin influenza A virus transmission to swine. The earliest reports of introductions of the influenza A(H1N1)pdm09 virus into the US swine herd occurred at the state fairs in Minnesota and South Dakota (30,31). Human-to-swine transmission is credited as a primary source of the genetic diversity seen in currently circulating swine influenza virus strains (32–34). Human-to-swine transmission of influenza virus A can be economically devastating for the pork industry because of decreased domestic sales, restrictions imposed by export partners, and production losses due to disease. Agricultural fairs may provide a conduit to introduce human-origin influenza virus A into the US swine herd.

No human cases of variant influenza A associated with any of the agricultural fairs included in this study were reported, even though influenza A (H3N2) viruses containing the M gene from the influenza A(H1N1)pdm09 virus were recovered from pigs at 6 of the participating fairs in 2011. However, the number of confirmed H3N2v cases dramatically increased during the summer of 2012, with most cases epidemiologically linked to swine exposure occurring at agricultural fairs (35,36).

A limitation of the study is that extrapolating the findings to other Ohio fairs and fairs in other states may not be possible because of the selection bias and inherent variability among agricultural fairs. Although the fairs where influenza virus A was recovered were diverse regarding the predetermined selection criteria (data not shown), the participating fairs were included in the study because they were ranked relatively high among Ohio fairs within >1 selection category. Expanded surveillance efforts for agricultural fairs are underway to more accurately estimate the true prevalence of influenza virus A infections among swine at agricultural fairs in Ohio. Recognized risk factors and accurate prevalence estimates are needed to lay the foundation for studies investigating potential interventions to decrease the probability of swine-to-human and human-to-swine transmission of influenza virus A at agricultural fairs.

Potential strategies to mitigate the risk for intra- and interspecies transmission of influenza virus A at fairs on the swine side of the human-swine interface include shortening the swine exhibition period, preventing interfair movement of pigs, and vaccinating exhibition swine for appropriate influenza A viruses. Recommendations have previously been made for mitigating risk on the human side of the human–swine interface (www.cdc.gov/flu/swineflu). Expanded risk assessments at agricultural fairs will provide animal and public health officials with scientific data that will enable them to make appropriate decisions to protect animal and public health while still furthering appreciation and understanding of agriculture and ensuring our future food security.

Dr Bowman is a graduate research associate at The Ohio State University. His research interests include the ecology and epidemiology influenza virus A at the swine-human interface along with developing preventive strategies to protect animal and public health.

We thank leaders at the agricultural fairs participating in this study for their support; Jillian Yarnell, Justin Dickey, Kelsi Wittum, Charles Martin, Carina Vitullo, and Lori Bowman for their assistance collecting samples; and Jody Edwards for laboratory support.