Baboons on South Africa’s Cape Peninsula come in frequent contact with humans. To determine potential health risks for both species, we screened 27 baboons from 5 troops for 10 infections. Most (56%) baboons had antibodies reactive or cross-reactive to human viruses. Spatial overlap between these species poses low but potential health risks. 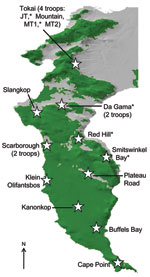 Figure 1. Cape Peninsula in South Africa, showing position and name of the different regions that have baboon troops. Baboons were sampled from those regions denoted by an asterisk. Green denotes natural land,...

The Cape Peninsula in South Africa is home to many species of wildlife, including ≈470 chacma baboons (Papio ursinus), which are a major tourist attraction and source of chronic conflict for local residents. Urban and agricultural land transformation has encroached markedly on the preferred natural habitat of baboons (1), and the 16 remaining troops on the Peninsula have been forced into marginal areas and are geographically isolated from all other baboon populations (Figure 1). The loss of preferred habitat, coupled with expanding numbers and a preference for high caloric food items, results in baboons entering residential areas daily to raid dustbins (garbage containers), enter homes, and attack humans in an effort to secure human-derived food (Figure 2).

The close contact between baboons and humans results in a high potential for the transmission of infectious diseases (2), from baboons to humans (zoonoses) and from humans to baboons (anthroponoses). Globally, disease transmission between humans and wildlife is occurring at an increasing rate, posing a substantial global threat to public health and biodiversity conservation (3,4). Although a study of baboon parasites in Kenya found none directly attributable to exposure to humans (5), the human parasite Trichuris trichiura has recently been identified in the Cape Peninsula baboon population; this finding represents the first evidence of likely anthroponotic infection of baboons (6). Diseases such as measles and tuberculosis are highly prevalent among the local human population (7) and have the potential to pass to baboons. The risks for infectious disease transmission between baboons and humans remain unclear. The aim of this study was to determine which diseases are currently present in the Cape Peninsula baboon population to inform decisions relating to baboon management, welfare and conservation, and the health risk to local humans and baboons. Ethical approval was gained from the Royal Veterinary College Ethics and Welfare Committee.

Twenty-seven baboons (15 male, 12 female) from 5 troops were screened for 10 zoonotic infections in April 2011. A nonstratified power analysis indicated that this sample would provide >95% confidence of detecting infections if they were present at a prevalence of ≥10%. Pathogens were chosen for screening according to a literature review of infections in primates of potentially serious anthroponotic or zoonotic risk. Older animals were preferentially sampled because these were thought most likely to have been exposed to diseases. Fourteen adult baboons (7 males >7 years of age, 7 females >5 years of age), 7 subadult baboons (2 males 5–7 years of age, 5 females 4–5 years of age), and 6 juvenile baboons (6 males <5 years of age) were sampled. Nonrandom sampling was done to increase the chances of detecting diseases, if present, and was considered appropriate because the aim of this study was to determine presence or absence of infection, not prevalence of infection.

Baboons were individually trapped in cages and anesthetized for blood sampling. Samples of feces from each baboon were collected from the cage floor. After reversal of anesthesia and a suitable recovery period, the baboons were released in sight of their troop.

Automated enzyme linked fluorescent assays (Vidas; bioMérieux, Marcy l’Etoile, France) were used to test for antibodies against measles, hepatitis A virus (HAV), cytomegalovirus (CMV), and Epstein-Barr virus (Table 1). The manufacturer’s positive controls (human serum specimens containing IgG) were used. A serum neutralization test was used to screen samples for poliovirus antibodies. An interferon-gamma release assay for tuberculosis was conducted by using the QuantiFERON-TB Gold In-Tube test (Cellestis, Carnegie, Australia). This assay has been used previously for detection of Mycobacterium tuberculosis infection in chacma baboons (8). Test results were interpreted according to the manufacturer’s criteria for human patients. Feces samples were stored at 5°C for up to 24 h before being cultured for Salmonella spp., Shigella spp., Yersinia spp., and Campylobacter spp. by using standard techniques (9).

Results are shown in Table 1. Fifteen (56%) baboons had antibodies reactive or cross-reactive to at least 1 human virus: CMV, HAV, and Epstein-Barr virus. Seven (26%) baboons had antibodies reactive or cross-reactive to 2 of these viruses. Baboons in every troop were positive for at least 1 viral infection, but considerable variation was found among troops (Table 2). One troop (Da Gama) showed a higher than average rate of exposure to HAV; 6 (75%) of 8 of the HAV antibody-positive baboons were in this 1 troop, despite this troop’s representing just 7 (26%) of the 27 baboons in the sample. All 3 baboons sampled from another troop (Red Hill) had antibodies against CMV (Table 2). No pathogenic bacteria were found. Because intermittent shedding of fecal pathogens means that sampling animals on a single occasion may miss cases of infection (10), negative fecal culture results should not be considered definitive.

This study provides evidence of the potential for cross-species trafficking of select pathogens. Widespread evidence of reactive or cross-reactive humoral immune responses to human pathogens was found in wild baboons. The detection of antibodies reactive or cross-reactive to HAV in 30% of baboons tested is a potential cause for concern. Because HAV is spread by the fecal–oral route, many opportunities might exist for direct and indirect transmission between baboons and humans; e.g., baboons frequent picnic sites and enter houses and cars in search of food. The frequency with which such contacts result in transmission of HAV should be investigated because of the potentially fatal consequences of human infection with HAV, particularly for immunocompromised persons such as those co-infected with HIV. Furthermore, as pathogens pass back and forth across species lines, the potential for changes in pathogenicity and host specificity exists, which can result in serious adverse effects on human and wildlife health.

The considerable variation in virus immunity among baboon troops (Table 2) warrants further study. The difference was particularly pronounced in the 2 most sampled troops, in which HAV antibody prevalence varied from 0% (0/8 baboons in the Tokai MT1 troop, in a forest) to 86% (6/7 baboons in the Da Gama troop, in an urban area). Future work should target these groups for more extensive sampling (ideally, all baboons should be sampled) to more accurately determine the prevalence of infection and investigate risk factors for virus exposure. A suitable hypothesis for testing would be that zoonotic infection prevalence in baboons is positively correlated with the proportion of urban land in their habitat.

The results of this study suggest that baboons on the Cape Peninsula pose a low but potential risk for transmitting zoonoses and that they might be at risk from anthroponoses. The findings should not be interpreted as definitively showing baboon exposure to human viruses because the serologic tests did not distinguish between human and baboon variants of the viruses and some cross-reactivity may have occurred. Virus isolation would be needed to determine the virus types. Nonetheless, there is ample evidence that disease of human origin can be devastating for primate populations (11,12). Further research is required on the Cape Peninsula to quantify the incidence of infections in baboons and humans, to examine the variation in levels of infection among baboon troops, and to measure the frequency of contact between species. Estimating the probability of cross-species disease transmission is challenging (13), but this information would be of tremendous use in informing baboon management plans with the aim of reducing the risks for infectious disease in humans and baboons.

Dr Drewe is a veterinary epidemiologist at the Royal Veterinary College in London. He is particularly interested in infectious diseases that are transmitted between wildlife, humans, and domestic animals and in identifying effective management strategies for such diseases.

Permission to conduct this research was granted by the South African National Parks Cape Research Centre. This study was funded by the Royal Veterinary College and the University of Cape Town.

Page created: December 18, 2013
Page updated: February 01, 2018
Page reviewed: February 01, 2018
The conclusions, findings, and opinions expressed by authors contributing to this journal do not necessarily reflect the official position of the U.S. Department of Health and Human Services, the Public Health Service, the Centers for Disease Control and Prevention, or the authors' affiliated institutions. Use of trade names is for identification only and does not imply endorsement by any of the groups named above.