To determine previous exposure and incidence of rickettsial infections in western Kenya during 2007–2010, we conducted hospital-based surveillance. Antibodies against rickettsiae were detected in 57.4% of previously collected serum samples. In a 2008–2010 prospective study, Rickettsia felis DNA was 2.2× more likely to be detected in febrile than in afebrile persons.

Rickettsioses are a major human health problem in many parts of the world, including sub-Saharan Africa (1,2). Awareness of rickettsiae as causes of public health problems has been increasing; several novel or emerging diseases caused by these pathogens have been recognized. In Kenya, recent reports have documented human infections with Rickettsia conorii (3,4) and R. felis (5) and tick infection with R. africae (6). Our objectives were to assess previous human exposure to rickettsiae and to determine the incidence of rickettsial infections among febrile and afebrile persons in western Kenya. 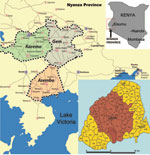 Figure 1. Locations of villages (brown shading in inset map) in Asembo area of western Kenya where the study was conducted, January 2007 through October 2008. Used with permission of Kenya Medical...

The study was conducted among patients visiting the Lwak Mission Hospital, a rural health care facility in western Kenya in the Asembo area, Rarieda District, in western Kenya (Figure 1). Lwak Mission Hospital serves as the field clinic for population-based infectious disease surveillance conducted by the Kenya Medical Research Institute and the US Centers for Disease Control and Prevention as described (7). The study was conducted with ethical approval from these institutions (protocol nos. 932 and 4566, respectively). To assess previous exposure to rickettsiae, we examined a randomly selected subset of 357 serum specimens collected January 2007 through October 2008 from patients participating in population-based infectious disease surveillance. Samples were screened at a dilution of 1:128 for IgG against spotted fever group (SFG) and typhus group (TG) rickettsiae by using an indirect fluorescence antibody assay (Fuller Laboratories, Fullerton, CA, USA).

Blood specimens were collected from the first 2 outpatients ≥5 years of age and the first 2 outpatients <5 years of age seen each day for acute febrile illness (recorded axillary temperature >38.0°C without an obvious cause, defined as cough, difficulty breathing, chest pain, signs of meningitis, or bloody diarrhea) from November 2008 through February 2010. A positive malaria smear was not an exclusion criterion. During the same period, blood specimens were also collected from controls: a group of outpatients who did not have febrile, respiratory, or diarrheal illness during the preceding 2 weeks and asymptomatic persons who accompanied patients to the clinic.

A total of 699 febrile patients who sought care at Lwak Mission Hospital from November 2008 through February 2010 and 236 afebrile persons enrolled during this same period were tested for rickettsiae (Table 1). Overall, 50 (7.2%, 95% CI 5.4%–9.3%) of the febrile patients and 8 (3.4%, 95% CI 1.5%–6.6%) of the afebrile persons had positive rickettsiae results according to the genus-specific gltA assay. Univariate logistic regression indicated that febrile patients were more likely than afebrile persons to have positive PCR results (odds ratio 2.20, 95% CI 1.03–4.70, p = 0.04). According to the ompB assay, all specimens tested were negative for tick-borne rickettsiae. BLAST searches (www.ncbi.nlm.nih.gov/blast/Blast.cgi) for homologous sequences determined that the segments amplified from the 3 genes had 100% nt homology with R. felis URRXWCal2 (Table 2).

The identification of R. felis DNA sequences in febrile patients confirms the previous finding of this pathogen among febrile patients in Kenya (5). Our findings are also similar to those from northern Tanzania, where acute rickettsiosis was serologically confirmed for 8% of febrile hospital inpatients (14), and from rural Senegal, where 6% of febrile patients without malaria had positive R. felis test results (15). Our findings suggest that rickettsial infections should be considered in the differential diagnosis of febrile cases in western Kenya and that diagnostic capacity should be established. Clinicians in malaria-endemic areas should consider rickettsial co-infections in diagnostic protocols and treatment of patients with malaria and other febrile illnesses.

Dr Maina is a researcher at the Kenya Medical Research Institute and a PhD student at Jomo Kenyatta University of Agriculture and Technology, Kenya. Her research interest is the epidemiology and diagnosis of emerging zoonotic diseases in multihost systems to identify reservoir hosts.

Dr Maina is a researcher at the Kenya Medical Research Institute and a PhD student at Jomo Kenyatta University of Agriculture and Technology, Kenya, at the time of this study. Her research interests are the epidemiology and diagnosis of emerging zoonotic diseases in multihost systems to identify reservoir hosts.

We thank Immaculate Amadi, Kabura Wamburu, and Sylvia Omulo for their assistance and all the reviewers for their helpful comments.

This research was supported by the US State Department Biosecurity Engagement Program, Wellcome Trust UK (grant no. 081828/B/06/Z), the US Centers for Disease Control and Prevention, and the US Department of Defense Global Emerging Infections Surveillance and Response System Program.