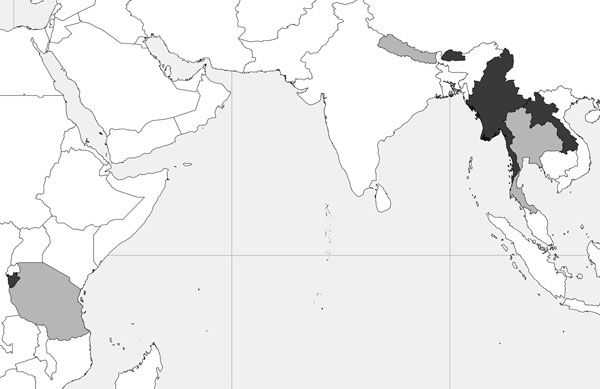 Figure 1. Geographic location and background of refugee populations sampled for antibodies against Taenia solium cysticerci by using the classic enzyme-linked immunoelectrotransfer blot for lentil-lectin purified glycoprotein. Countries of origin are shaded dark grey (Burundi, Bhutan, Burma [Myanmar], Laos). Host countries are shaded light grey (Tanzania, Nepal, Thailand). Burundi: ≈14,000 Burundian refugees who lived in camps in Tanzania since 1972 were resettled during 2006–2008. Resettled refugees were primarily ethnic Hutu. Bhutan: ethnic Lhotshampa Bhutanese refugees arrived in Nepal ≈1990. Resettlement began in 2008 and is ongoing, with ≈40,000 resettled thus far. Burma: there has been intermittent influx of refugees into Thailand from Burma since 1984. Resettlement began in 2004 and is ongoing, with ≈90,000 resettled thus far. Resettled refugees in this group are primarily ethnic Karen and Karenni. Laos: refugees from Laos arrived in Thailand as early as 1975, and many resettled soon thereafter. The most recent round of resettlement from the Wat Tham Krabok camp occurred during 2004–2006 with resettlement of ≈16,000 ethnic Hmong refugees.

Page created: February 16, 2012
Page updated: April 25, 2012
Page reviewed: April 25, 2012
The conclusions, findings, and opinions expressed by authors contributing to this journal do not necessarily reflect the official position of the U.S. Department of Health and Human Services, the Public Health Service, the Centers for Disease Control and Prevention, or the authors' affiliated institutions. Use of trade names is for identification only and does not imply endorsement by any of the groups named above.