Crimean-Congo hemorrhagic fever virus (CCHFV) is a tick-borne pathogen of the Bunyaviridae family (1). The primary modes of transmission to humans are tick bites, handling of ticks, exposure to blood or tissues of viremic livestock, and direct contact with blood and body fluids of infected persons. After a 3–7-day incubation period, sudden onset of fever, myalgia, headache, and gastrointestinal symptoms develop. Hemorrhagic signs can include petechiae; cutaneous hematomas; or bleeding from the nose, gastrointestinal tract, or urogenital tract (2). Among hospitalized patients, case-fatality rates range from 5% to 30% (3,4).

Ticks of the genus Hyalomma are the primary vectors for CCHV, and the virus is endemic throughout Africa, the Middle East, eastern Europe, and central Asia. Hyalomma spp. ticks are 2- or 3-host parasites, and adults feed mainly on large mammals, such as livestock. Although viremia and antibodies develop in infected livestock, no disease appears to be associated with CCHFV infection (5).

CCHF is a reportable disease in Kazakhstan. A suspected case was defined as fever and >1 hemorrhagic sign or thrombocytopenia. A probable case was a suspected case in a person with a known risk factor for CCHF, such as a tick bite, handling of livestock, or exposure to blood or body fluids of a CCHFV-infected patient. A confirmed case was defined as laboratory evidence of infection by IgM, IgG, or antigen-capture ELISA (VECTOR-BEST, Novosibirsk, Russia), or quantitative real-time PCR (8). We reviewed lists of persons with confirmed and suspected CCHF cases in Southern Kazakhstan Oblast during 2009 and 2010 and compiled summary statistics. Data regarding date of disease onset and residential location were assessed.

Data on humans and animals were collected for diagnostic and surveillance purposes and were analyzed anonymously. Permission was sought from livestock owners before tick collection. No animal sampling was done as a part of this study.

Residents of Southern Kazakhstan Oblast were instructed to go to their local health care provider if they noted a tick bite. The health care provider registered them and instructed them to monitor their temperature at home for 14 days and return if fever developed. We obtained weekly summaries of tick bites and fevers reported in Southern Kazakhstan Oblast during spring and summer 2009 and 2010. In 2010, tick bites were additionally reported by rayon (local municipality). Tick bite data were compared with CCHF cases reported by date and location. We analyzed summary statistics by using standard software (SAS Institute, Inc. Cary, NC, USA) and considered p<0.05 significant. Maps were made by using geographic information systems software (Arc-GIS, ESRI, Redlands, CA, USA). 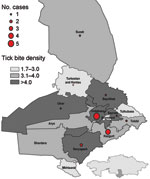 Tick bites have long been recognized as a means of CCHFV transmission to humans (9–12), and the novel tick bite registry system provided an opportunity to examine the association between the population-level incidence of tick bites and CCHF. We demonstrated spatial and temporal correlation between reported tick bites and CCHF cases; distinct peaks in tick activity and disease were observed in both years and in regions with higher risk for CCHF in 2010. Such a registry is useful for timely deployment of tick control measures and preventive educational efforts. Exposures to ticks and livestock were commonly reported by persons with CCHF; at-risk populations should be educated about the disease and protective measures to reduce tick bites or exposure to blood and tissues of infected livestock.

Although clinical data available in this investigation were limited, we observed that disease severity of recent CCHF cases in Southern Kazakhstan Oblast are similar to those described previously in Kazakhstan and in other regions to which CCHF is endemic (6,13,14). The recent occurrence of nosocomial transmissions in Southern Kazakhstan Oblast underscores the need for barrier nursing techniques. Education to raise awareness among physicians of the clinical signs and symptoms, infection control measures, and treatment strategies for CCHF remains critical (15).

Our analysis of CCHF surveillance data in Kazakhstan found a high number of reported tick bites during the spring and summer and spatial and temporal association between tick bites and CCHF cases. Public health measures should center on preventing tick bites, increasing clinician awareness of CCHF signs and symptoms, and adopting infection control practices in hospitals.

Dr Knust is an epidemiologist in the Viral Special Pathogens Branch at the Centers for Disease Control and Prevention. Her research interests include epidemiology and ecology of zoonotic disease viruses.

Funding for this study was provided by the governments of Kazakhstan and the United States.